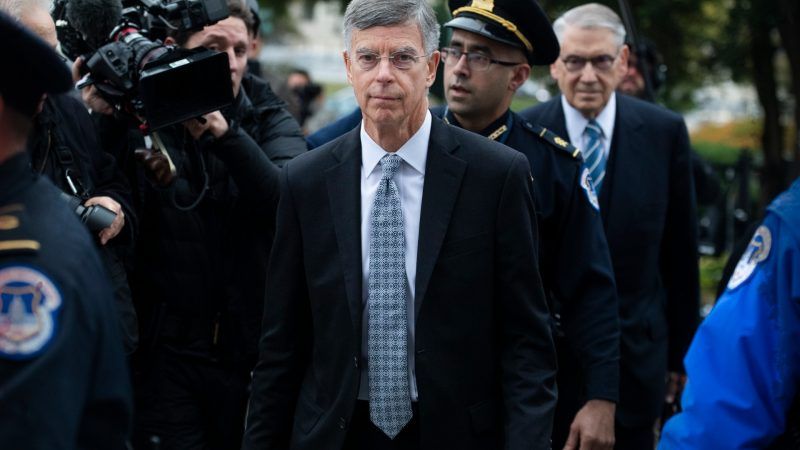 U.S. Ambassador William B. Taylor dishes further about Trump meddling in Ukraine. Taylor took the ambassadorship to the Ukraine job in May but by July was having serious doubts, according to his testimony yesterday before impeachment investigators in the U.S. House of Representatives. It had become clear to him that Trump allies were pursuing bizarre side goals in Ukraine that ran contrary to the work he was supposedly sent to do.

Taylor said that U.S. goals in Ukraine were "fundamentally undermined by an irregular, informal channel of U.S. policy-making" dedicated to digging up dirt that could harm President Donald Trump's political enemies and cronies asking for other favors that would benefit Trump politically—sometimes conditioning aid on these requests. From The Washington Post:

The worrisome signs had been building for weeks. Taylor's predecessor had been recalled from Kyiv under questionable circumstances. A few days before his visit to the front lines, Taylor had received a report from Washington that the $391 million in military aid was being held up until Ukraine's new president committed to investigations that would help Trump.

Perhaps most troubling, the ambassador couldn't get a readout of a call that had taken place one day earlier on July 25 between Trump and Ukrainian President Volodymyr Zelensky.

Yikes. I didn't think things could get much more damning than that call, but this is really appalling. Everything about this screams that they knew they were doing something wildly inappropriate. https://t.co/F3RBMwU4sU

You can read Taylor's full testimony here. He concludes:

There are two Ukraine stories today. The first is the one we are discussing this morning and that you have been hearing about for the past two weeks. It is a rancorous story about whistleblowers, Mr. Giuliani, side channels, quid pro quos, corruption, and interference in elections. In this story Ukraine is an object.

But there is another Ukraine story—a positive, bipartisan one. In this second story, Ukraine is the subject. This one is about young people in a young nation, struggling to break free of its past, hopeful that their new government will finally usher in a new Ukraine, proud of its independence from Russia, eager to join Western institutions and enjoy a more secure and prosperous life.

Involuntary commitment procedures in New Hampshire questioned. A woman involuntarily committed for mental health treatment is suing the state of New Hampshire after being held against for nearly three weeks over a technicality. The woman should have been transferred from an emergency room to a psychiatric facility, but all of the state's facilities were full. She should also have been given a chance to argue her case before a judge within three days—but that's only done through the state psychiatric facilities. This meant the patient could not go before a judge or go home until a spot in state care opened up.

"The legality of this situation is now being debated in federal court," notes NPR. The woman "ended up spending 20 days locked inside a wing of St. Joseph's emergency department."

"Indian-made" law under scrutiny. Missouri artist Peggy Fontenot is suing the state over a law saying that only people from federally-recognized Native American tribes can market their arts, crafts, and other goods as "Indian-made." Fontenot is part of a tribe, the Patawomecks, recognized by the state of Virginia but not by the federal government.

Fontenot sued over a similar law in Oklahoma, and won in federal court a few months back. Her latest lawsuit was filed with the U.S. District Court for the Western District of Missouri.

Seven months paid leave for cop caught in massage parlor prostitution sting. Officer Jay Jesus Rodriguez "spent seven months on paid administrative leave while the Florida Department of Law Enforcement investigated" a video in which he "appears to engage in a sexual act with one of the targets" of an undercover sting at a Florida massage parlor, according to the Fort Myers News-Press. Rodriguez "was paid more than $60,000 plus benefits while on administrative leave." Meanwhile, "the sting at the massage parlor ended with the arrest of two women," though one had her record expunged and charges were eventually dropped against the other.

An 8 y.o. girl was almost kidnapped by a stranger on school playground during recess.

This made @AJC columnist #BillTorpy verrrry suspicious.
He was right to be. But other outlets EAGERLY reported the story w/out questions. #OutrageAddiction https://t.co/zPBeXfEKt7