Illicit fentanyl and heroin accounted for the vast majority of opioid-related deaths, while only 1 percent of cases involved drugs for which people had prescriptions. 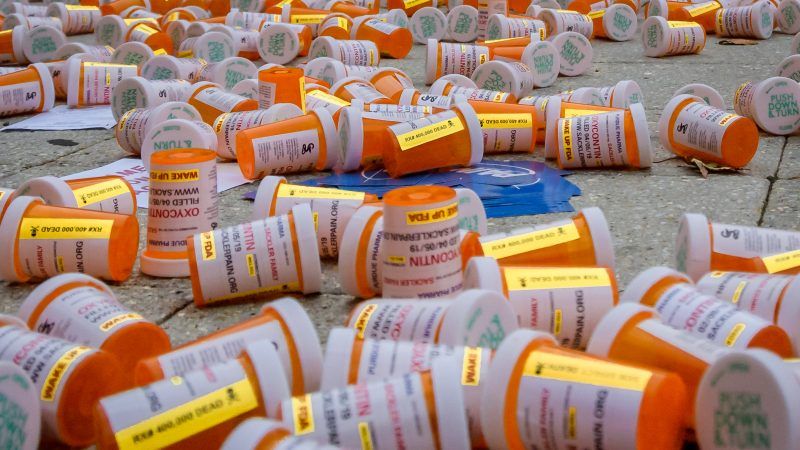 Although prescription pain medication is commonly blamed for the "opioid epidemic," such drugs play a small and shrinking role in deaths involving this category of psychoactive substances. A recent study of opioid-related deaths in Massachusetts underlines this crucial point, finding that prescription analgesics were detected without heroin or fentanyl in less than 17 percent of the cases. Furthermore, decedents had prescriptions for the opioids that showed up in toxicology tests just 1.3 percent of the time.

Alexander Walley, an associate professor of medicine at Boston University, and five other researchers looked at nearly 3,000 opioid-related deaths with complete toxicology reports from 2013 through 2015. "In Massachusetts, prescribed opioids do not appear to be the major proximal cause of opioid-related overdose deaths," Walley et al. write in the journal Public Health Reports. "Prescription opioids were detected in postmortem toxicology reports of fewer than half of the decedents; when opioids were prescribed at the time of death, they were commonly not detected in postmortem toxicology reports….The major proximal contributors to opioid-related overdose deaths in Massachusetts during the study period were illicitly made fentanyl and heroin."

The study confirms that the link between opioid prescriptions and opioid-related deaths is far less straightforward than it is usually portrayed. "Commonly the medication that people are prescribed is not the one that's present when they die," Walley told Pain News Network. "And vice versa: The people who died with a prescription opioid like oxycodone in their toxicology screen often don't have a prescription for it."

Since the researchers considered only active prescriptions, it's possible that other decedents had been prescribed pain medication at some point. It is also possible that some of them were introduced to opioids through medical care and became addicted to them, later switching to the illicit drugs they took before their deaths. But that pattern does not appear to be very common.

A 2007 study found that 78 percent of OxyContin users seeking addiction treatment reported that they had never been prescribed the drug for any medical reason. Other studies have found that only a small minority of people treated for pain, ranging from something like 1 percent of post-surgical patients to less than 8 percent of chronic pain patients, become addicted to their medication. A 2015 study of opioid-related deaths in North Carolina found 478 fatalities among 2.2 million residents who were prescribed opioids in 2010, an annual rate of 0.022 percent.

That unusual scenario nevertheless figures prominently in discussions of opioid abuse and in criticism of pharmaceutical companies accused of causing the problem by exaggerating the benefits and minimizing the risks of their products. The focus on pain pill prescriptions is clearly disproportionate given their actual role in opioid-related deaths, and it has led to policies that deprive bona fide patients of the medication they need while pushing nonmedical users toward black-market substitutes, which are far more dangerous because their potency is unpredictable.