The Creek Nation and the Culture of Consent

Under threat from the United States, Creek people replaced consent with coercion. Then they lost everything. 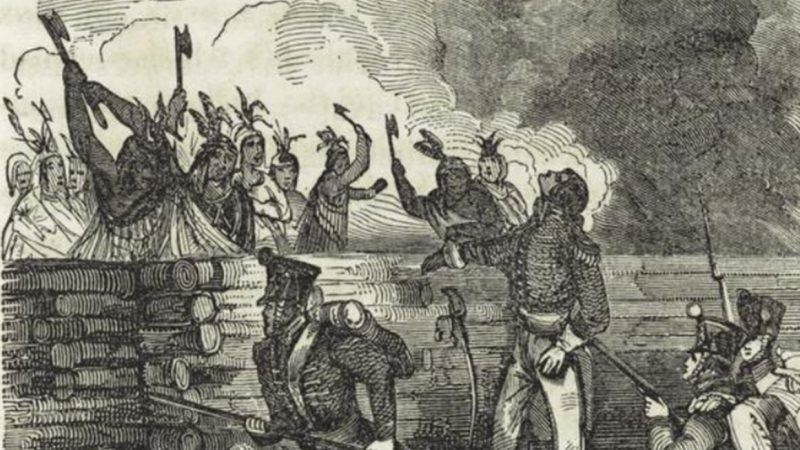 Of One Mind and of One Government: The Rise and Fall of the Creek Nation in the Early Republic, by Kevin Kokomoor, University of Nebraska Press, 516 pages, $80

In the decades after the United States achieved independence, its representatives compelled the Creek people of present-day Georgia, Alabama, and Florida to reorder their social system into a coercive state. This, officials said, would make the Creeks "good neighbors" to U.S. citizens, and especially to the country's problem child, the unruly state of Georgia. The U.S. then proved to be a poor neighbor itself, systematically humiliating and undermining the very Creek government it had demanded, effectively pushing the Native Americans into civil war, and ultimately abandoning all pretense of respecting the sovereignty of—or its treaties with—the Creek Nation.

Historian Kevin Kokomoor of Coastal Carolina University tells this story in Of One Mind and of One Government. In return for transforming themselves into a reflection of the United States, he concludes, the Creeks lost many of their traditions, all of their homelands, and thousands of their lives. Kokomoor doesn't fully articulate this, but they also lost a responsive and dynamic political system that existed before the U.S. ordered its makeover.

The accomplishments of the traditional Creek system are especially significant given that they were not a homogenous population. They were a collection of disparate peoples from different linguistic groups. "A Coweta man in the Lower Country who spoke Muscogee," Kokomoor notes, "would have needed a translator to do anything meaningful in either Hitchiti or Yuchi communities, even though they were only miles away and were considered just as Creek."

The system that evolved to bring coherence to this diverse landscape was based on noncoercive consent seeking. The "center of Creek politics had always been oratory and debate in the town's square ground," Kokomoor writes. Civil and military leaders—including the most powerful micos, or headmen—led through persuasion and by cultivating respect. Ad hoc figures of influence, such as the "Great Beloved Man," were recognized outside the traditional channels of leadership. A matrilineal clan structure allowed for kin-based retributive justice, and a dual organizational system of "war" and "peace" leadership structures further distributed authority and responsibility among the Creek communities.

The result was a decentralized, adaptable framework of predominantly local decision making that balanced the needs of the geographically distinct Upper Towns and Lower Towns, that placed no undue burden on any one community or region, and that nurtured a nascent sense of nationhood without European-style political nationalism. What the Creek system could not do, however, was react with speed, decisiveness, and unity against the aggressive expansionism of first Georgia and then the United States.

Thus, the Creeks learned some of the worst possible lessons from their neighbor.

The formation of the Creek National Council in the late 1790s—a response to what Kokomoor calls "extreme outside pressure"—consolidated the voice and authority of the Creek people and did represent "a clear adaptation of old Creek customs." But its "coercive, disciplinary authority" was revolutionary in the ways it transformed the understanding of justice and depersonalized the infliction of violence. In short, U.S. representatives got what they wanted, "a state structure that much more closely resembled their own."

The National Council organized warriors into an easily mustered police force, using symbolic "sticks" to represent the fist of national authority. These stick-bearing warriors delivered the new state justice to their fellow Creeks via beatings, mutilations, and executions. The satisfaction that U.S. citizens demanded for stolen horses and livestock, for harassments and attacks, even for murders—justice the former Creek Country had provided in its own way, according to its traditional system, in a community- and kin-based manner that European Americans rejected—was now served to U.S. taste, far bloodier than before.

The U.S. and Georgian governments made it clear that the Creek Nation would be held accountable for crimes committed against European Americans by individual Creeks. Yet despite numerous promises from authorities to the contrary, Georgians murdered, raped, assaulted, and stole from Creeks with near impunity. The "lawless actions of local Georgians, whom state officials were not even pretending to control," Kokomoor writes, consistently undermined all attempts at good relations. Extreme pressure came to bear on the new Creek National Council to wreak violent justice against its own wrongdoers, but no similar satisfaction came from the other side.

For that matter, in this period neither Georgia nor the U.S. got the hang of negotiating with and seeking consent from the official representatives of Native nations. Kokomoor tours a train wreck of illegitimate, coerced, and/or ignored treaties.

In 1786, there was the Georgia-Creek council at Shoulderbone, at which Georgia's "combative approach to a treaty conference seems bizarre almost to the point of being unbelievable." (Among other things, the Georgians took the only Creek headmen still loyal to the United States hostage.) There was the crisis created in 1790 by the disastrous and destabilizing U.S. Treaty of New York, a project orchestrated by a self-appointed and self-interested go-between, the Creek-Scottish Alexander McGillivray, complete with side deals offered by the United States for McGillivray alone. And by 1806, the reader is unsurprised to learn, settlers "were illegally logging, fishing, and even settling on Creek lands only a year after American authorities promised Georgia would never need to ask for more."

Add the vastly unequal burdens shouldered by different Creek communities in the face of U.S. expansionism, and the Creek people were pushed to the breaking point. The Red Stick Rebellion of 1813–14 was in effect a Creek civil war (further complicated by America's War of 1812). The rebels did not abandon the notion of a unified Creek Nation, but they did challenge the authoritarian Creek National Council and the U.S. system that had called it into being. As Kokomoor puts it, many Creeks became convinced that "the shortcomings of the National Council far outstripped the stability it provided. It had only absorbed and could only guarantee the worst, most politically, economically, and culturally objectionable parts of American culture."

When Kokomoor's narrative ends, the Creeks are devastated by the conflict and the U.S. is treating its Creek allies as cruelly as its enemies. In 1814, Washington stripped the Creek National Council of much of its territory and most of its control over what land remained. As Kokomoor says, "Creek sovereignty was officially dead. It had been a fiction to American authorities for years, and the Red Stick War provided…the opportunity to do away with it altogether." An altered but coherent and vital Creek nation-state remained, however, and would survive Creek Removal to present-day Oklahoma, unlike many Creeks themselves.

Kokomoor's prose makes a dry dissertation look like a sensationalist thriller, and many of the story's most interesting interludes happen offscreen. Some arguably colonialist assumptions slip into his critique of colonialism—he is quick to note the "religious fanaticism" that was a factor in the Red Stick Rebellion but ignores the heavy doses of Christian rhetoric used to support westward expansion. And while Kokomoor understandably dwells on the challenges that first European and then U.S. expansionism posed to the values of "local governance, kinship guidance, and reciprocity" that informed traditional Creek justice, he pays far less attention to such disruptions as the reorganization of Creek society from a matrilineal to patrilineal structure to satisfy European-American assumptions about gender.

But on the whole, Of One Mind and of One Government is an important portrait of U.S.-Creek relations, a useful contribution to our understanding of state building, and a justifiably scathing indictment of U.S. power politics. Kokomoor shows that the fall of the Creeks foreshadowed the fate of other Native nations who befriended the United States, embraced its "civilization campaign," and were punished for the sin of trusting the system to work.