More than 300,000 students in Chicago were out of school on Friday as the teachers strike continued. 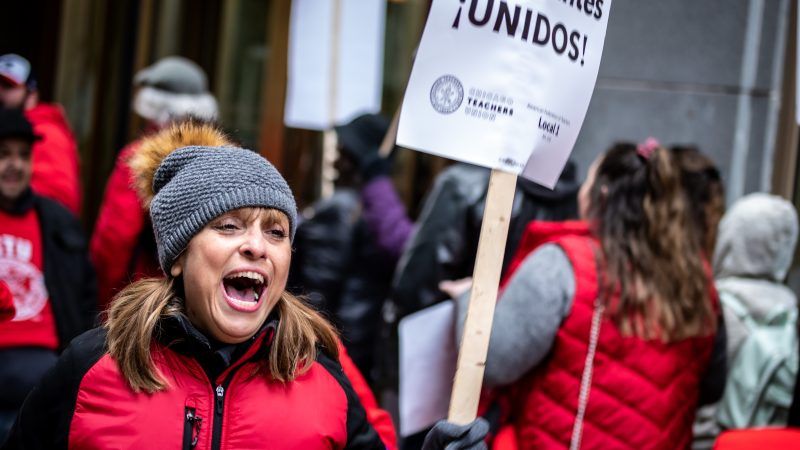 Chicago's 300,000-plus public school students had no school on Friday as the city's teacher strike extended into a second day. While some of the teachers union's requests are par for the course—higher pay and smaller class sizes, for instance—the other demands are likely unmeetable.

Approximately 26,000 teachers and 8,000 additional staff members continued striking on Friday after rejecting the Board of Education's Oct. 11 counteroffer of a 16 percent pay raise over five years as well as $400,000 for recruiting and training nurses, counselors, and social workers. Faculty say that such support positions are spread too few and far between, with some of those workers having to cover multiple schools. The city's proposal also includes the creation of 20 new "community schools" with expanded after-school programs and social-emotional support and trauma interventions.

Democratic Mayor Lori Lightfoot characterized the city's counteroffer as a generous one and said that going beyond it would push the city closer to financial insolvency. "We have tried to provide the best deal that's fiscally responsible, fair to teachers, and fair to taxpayers," Lightfoot said in a press conference Wednesday.

But the Chicago Teachers Union disagrees. The union is demanding a 15 percent pay raise over three years, better benefits, as well as the need for a Restorative Justice Coordinator at each school to supplant the heavy police presence. Teachers have also asked for thousands more support staff, though Lightfoot's proposal would more than double the current number of nurses and social workers. Under their plan, Chicago Public Schools would hire an additional 250 nurses by 2024, giving each school their own dedicated medical professional within five years.

"Every day we go to work, the stress level is sky-high. The kids are not ready to learn, they suffer a great deal of trauma, they are hungry and tired," Catherine Dalber, an instructor at Lawndale Elementary Community Academy, told The Washington Post. "I can't do every job."

On average, Chicago teachers earn $79,000, about $20,000 higher than the mean national salary for a public school educator. The Illinois Policy Institute estimates that the Chicago Teachers Union's demands would cost taxpayers an extra $397 million in the first year, with the figure increasing each subsequent year as benefits and compensation expand.

That estimate is partly based on the union's requirement that the city fund more affordable housing for teachers and students. Teachers say they won't return to the classroom unless the Chicago government contractually obligates itself to subsidize more low-income housing.

Housing in Chicago is certainly a problem, with extreme poverty and a high degree of segregation. But demanding affordable housing as part of contract negotiations complicates an already fraught situation. It's a slower and more complicated approach, as it requires that the government build new housing and rent it to teachers and their students' families at a discount, rather than simply rezoning the city in a way that incentivizes the private development of more housing stock. Lawmakers would need to collect new funds for the project, pinpoint appropriate and available locations, complete construction, and then institute price controls to ensure that teachers and students could access the developments.

"Affordable housing is a critical issue that affects residents across Chicago, and everyone's voices need to be heard during this process," Lightfoot said in a statement earlier this month. "As such, the collective bargaining agreement is not the appropriate place for the City to legislate its affordable housing policy."