Trump Wishes Russia Luck in Syria as U.S. Bombs Its Own Bases and Erdogan Scoffs at Trump's Attempt to Make a Deal 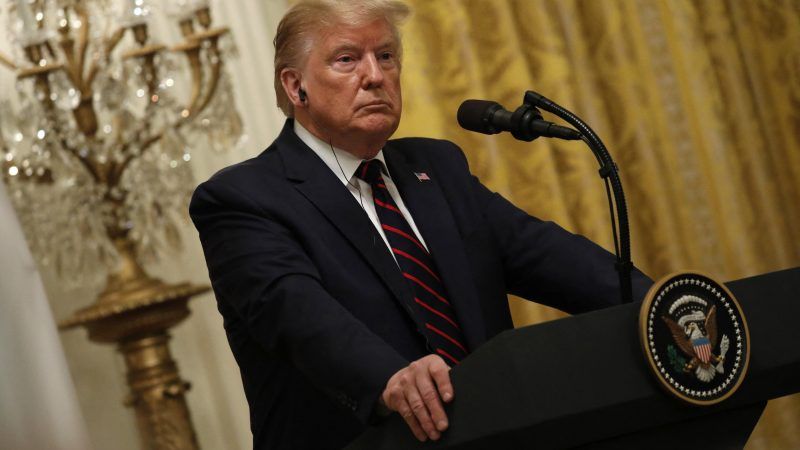 "If Russia wants to get involved with Syria, that's really up to them," President Donald Trump said yesterday, adding that he wishes "them all a lot of luck."

But the Kurds are "no angels," Trump insisted, and he could understand why Turkey might want their territory. "What does that have to do with the United States of America if they're fighting over Syria's land?" Trump asked.

The president doesn't seem to understand that he's not being criticized simply for getting the U.S. out of Syria. Getting out is right, but Trump did so in a such a way that left northern Syrians—America's allies in fighting ISIS—especially vulnerable, made it more likely that ISIS militants would escape, and left the U.S. to bomb its own military facilities for lack of time to properly clear out the ammunition and equipment there.

Trump wants people to believe his actions stem from principled opposition to endless war, that they're part of a grander plan to reduce the U.S. presence in Syria the Middle East. But no matter how many times Trump says it, his administration's actions say otherwise.

For one thing, plenty of U.S. troops are staying put in parts of Syria that Turkey doesn't want to invade. Meanwhile, just last week the administration announced that thousands more U.S. troops are being sent to Saudi Arabia. And since Trump took office, "the U.S. military presence in the Middle East has not changed much at all," reports Foreign Affairs.

Trump's rhetoric about ending forever wars and minding our own damn business is mighty refreshing, but rhetoric is all it is—empty rhetoric.

Trump seems to have thought it would be easy to convince Turkey not to invade in the first place. In an astonishing letter that the White House has confirmed is real, Trump starts out by telling Turkish President Erdogan: "Let's work out a good deal!" The letter concludes:

Vice President Mike Pence and Secretary of State Mike Pompeo are now in Turkey trying to force a resolution. "We need them to stand down, we need a cease-fire, at which point we can begin to put this all back together again," Pompeo said on Fox Business yesterday.

"The Trump administration is correct to limit our commitment in eastern Syria, but it is very clumsy in managing the policy and the rollout," former U.S. ambassador to Syria Robert S. Ford told The New York Times. "At this late stage, it is not clear what the administration can hope to salvage."

Yesterday's House hearing on Section 230 and social-media moderation was, predictably, another clown show:

Amazing to watch a conservative member of Congress grill Google about too much content moderation right after Dr. Farid accused these companies of not having any motivation to moderate content. #Section230

This is incorrect. I don't know of any major online platform that doesn't remove content as enabled under #Section230's Good Samaritan provision. https://t.co/XjPRWWczWG

There have been some calls—from both sides of the aisle—for a Big Government to mandate or dictate free speech or ensure fairness online. These proposals are not consistent with the #FirstAmendment. pic.twitter.com/wNVnf2DJ87

Summary of today's #Section230 hearing: bring together a few experts on how 230 and content moderation works, mixed with a few people who haven't the foggiest clue beyond "obviously it can be fixed" and pepper them with misleading questions prepared by anti-internet lobbyists.

For more on what Section 230 is and what's at stake, watch this recent Reason TV video: