Trump Beats His GOP Competitors at Fundraising 194 to 1

The 'Three Stooges' of Bill Weld, Joe Walsh, and Mark Sanford raised $647,000 combined in the third quarter, compared to $125.7 million for the presidential juggernaut. 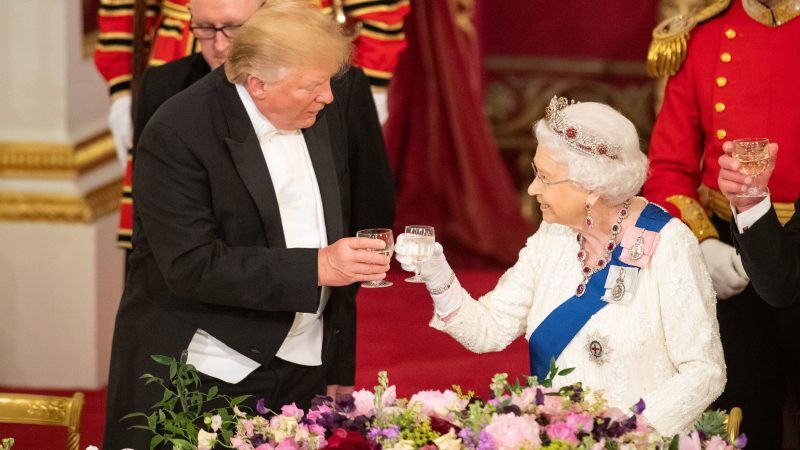 Here is one way of thinking about President Donald Trump's massive fundraising advantage over his GOP primary opponents Bill Weld, Joe Walsh, and Mark Sanford: If you stacked in $1 bills the combined $647,000 third quarter fundraising haul of the "Three Stooges" ($457,400 for Weld, $129,200 for Walsh, $60,400 for Sanford), it would go up to about 230 feet, or 20 stories—the height of the Drop Line in Dollywood.

What if you did the same for the combined Trump/Republican National Committee (RNC) third quarter total of $125.7 million? That would be 45,000 feet, more than eight miles high, the absolute upper altitude limit for commercial aircraft. A Mt. Everest and a half, with some extra snow on top. It is a lot more money, is what I am saying.

The Trump re-election campaign by itself raised $41 million in the quarter, second only to billionaire long shot Democrat Tom Steyer's largely self-funded $49.6 million, according to recently released Federal Election Commission filings. But since the Trump campaign and the RNC have literally and unprecedentedly merged, he also gets access to the latter's $84.7 million. He is out-fundraising his combined Republican competition by a ratio of 194 to 1.

How low is the Three Stooges' combined $650,000 (rounded up) total? Consider that Montana Gov. Steve Bullock, who has qualified for only one of the four Democratic presidential debates so far (in part because he's polling nationally at around 0.4 percent), raised more than three times as much in the third quarter (July, August, and September).

Weld's total was lower than his already-pathetic second quarter figure of $688,000, despite having two extra weeks (he officially announced on April 15). The former Massachusetts governor and 2016 Libertarian Party vice presidential nominee has $208,000 cash on hand, far behind the $1.3 million war chest of Mark Sanford, the former South Carolina congressman and governor, who transferred almost all of that from his former congressional account, according to The Post and Courier. Illinois congressman turned political shock jock Walsh (who entered the race Aug. 25; Sanford came in the following week) has $115,000.

It is rare in four-way polling for Weld/Walsh/Sanford to combine for even 10 percent against Trump. The RealClearPolitics national polling average givs Trump 85.3 percent, Weld and Walsh 2.8 percent each, and Sanford 2.3 percent. Things look somewhat better close to Weld's home in the early primary state of New Hampshire, where an Oct. 9-13 RKM Research and Communications survey of 405 likely Republican voters had Trump at 71 percent, Weld at 14 percent, Walsh at 5 percent, and Sanford at 1 percent.

Weld's strategy leans heavily on a surprise showing in New Hampshire, where he hopes he can be more like Pat Buchanan in 1992 than Pete McCloskey in 1972.

Trump's approval rating among Republicans has been at 2019 lows in the last two Gallup polls. But that's still at 87 percent; he was as low as 81 percent in 2018, and occasionally dipped into the 70s his first year in office. State Republican parties, under pressure from his campaign, have been canceling primaries and changing delegate-allocation rules to make the 2020 Republican National Convention more like a "four-day television commercial."

Even while a slim but growing majority of Americans continue to support Trump's removal from office, the Republican Party is unifying in support for its historically unpopular president.