Elizabeth Warren Is the Democratic Frontrunner. Everyone's Piling On.

Fellow Democratic candidates took aim over how Warren plans to pay for all the "free" stuff she's promising, her policy in the Middle East, and her thoughts on Trump's Twitter account. 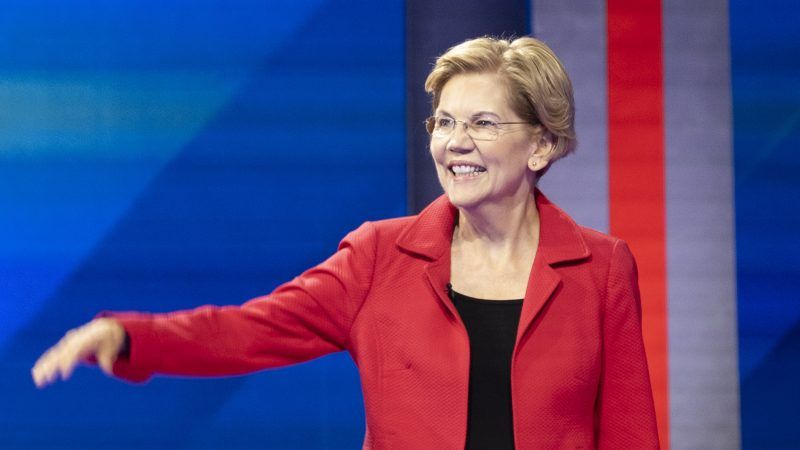 Last night, some Democratic presidential candidates took aim at Sen. Elizabeth Warren (Mass.) over war, health care, and how she plans to pay for all of the "free" things she's been promising. Sen. Kamala Harris (Calif.) also got huffy over Warren not joining Harris in demanding that Twitter cancel President Donald Trump's account.

(Andrew Yang still just wants to give everyone $1,000 and New Jersey Sen. Cory Booker seems to just want everyone to get along.)

The latter three mostly tried prompting or provoking Warren into saying how she would pay for all the programs she's proposing—Medicare for All, universal child care, and tuition-free college, to name a few—and admitting that taxes on most Americans would go up to cover the cost of her plans. But Warren repeatedly dodged direct questions and deflected their concerns.

Watching O'Rourke and Klobuchar (who, as per usual, reminded viewers that she's from the Midwest about 80,000 times) make Warren squirm was sort of fun, but both B-list candidates were plenty bad otherwise. O'Rourke doubled down on a pledge to seize guns. Klobuchar accused Russia of "actually invading our election" in 2016. (O'Rourke did have a good comment on tech companies, saying it's not "the role of a candidate for the presidency to call which companies should be broken up.")

Meanwhile, Harris (who, as usual, reminder viewers she's a former prosecutor about 80,000 times) badgered Warren for not joining her in calling on Twitter to ban Trump. (This has become a running Harris theme.)

Tulsi Gabbard (who remains great on foreign policy, bless her heart, but bizarre-to-bad on domestic issues) pressured Warren to join her "in calling for an end to this regime change war in Syria, finally." Warren, appearing flustered, responded "so, look, I think that we ought to get out of the Middle East. I don't think we should have troops in the Middle East."

Warren's campaign subsequently defined getting out of the Middle East to not really mean that.

Warren campaign aide on the senator's "get out of the Middle East" comment:

"it was a reference to combat troops since we have multiple non-combat bases, in UAE, Qatar, Bahrain, etc. and she did not mean those."

Pete Buttigieg went after Warren over Medicare for All, saying that his plan—"Medicare for all who want it"—would see that all Americans got health care but still leave people with choice:

No plan has been laid out to explain how a multi-trillion-dollar hole in this Medicare for All plan that Senator Warren is putting forward is supposed to get filled in. And the thing is, we really can deliver health care for every American and move forward with the boldest, biggest transformation since the inception of Medicare itself.

But the way to do it without a giant multi-trillion-dollar hole and without having to avoid a yes-or-no question is Medicare for all who want it. We take a version of Medicare. We let you access it if you want to. And if you prefer to stay on your private plan, you can do that, too. That is what most Americans want, Medicare for all who want it, trusting you to make the right decision for your health care and for your family. And it can be delivered without an increase on the middle-class taxes.

Warren replied that "Medicare for all who want it" is really just "Medicare for all who can afford it." That's strange, since the only big difference in Buttigieg's plan is permitting private and health insurance plans to still exist. Any low-income person who wanted to could still opt in to the government-run program. But Warren's model is contingent on forcing everyone to sign up.

Best moments of the debate:

Worst moments of the debate: everyone on "Big Tech," social media, data, and antitrust.

The Warren and Yang comments serve as a reminder that the ongoing "Techlash" is bipartisan.

Check out my colleague @MrRBourne's recent paper on tech and antitrust.

Over a week ago the Wall Street Journal asked me to comment on the report that occasioned this story. Sadly none of my comments made the cut. But that's ok, I'm happy to repeat what I told WSJ (and more!) on twitter in this thread you're gonna want to readhttps://t.co/B8E9WILc0o