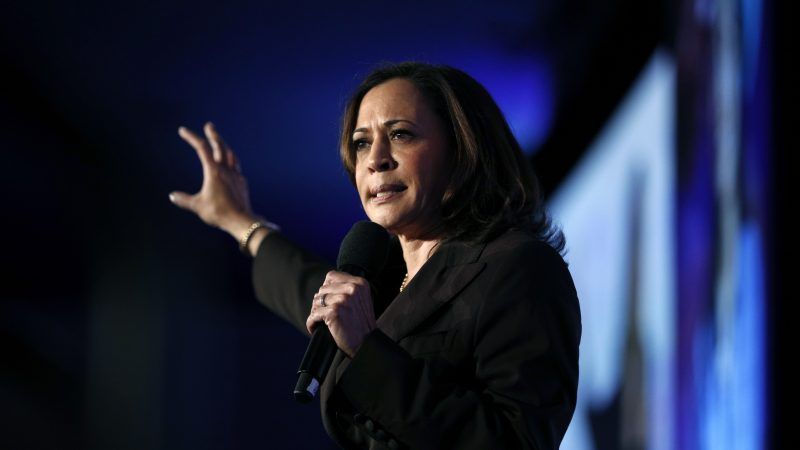 When it comes to politics, Democratic presidential hopeful Sen. Kamala Harris (D–Calif.) is "For The People." When it comes to Twitter, though, she would like to put the fate of President Donald Trump's account in the hands of one powerful man: CEO Jack Dorsey.

"He and his account should be taken down," said Harris during Tuesday night's debate, facing off against Sen. Elizabeth Warren (D–Mass.) who declined to support the move.

Harris made her original case in an October 1 letter to the tech CEO. "These are blatant threats. We need a civil society, not a civil war," Harris wrote, referring to Trump's noxious tweets about the Ukraine call whistleblower. "These tweets represent a clear intent to baselessly discredit the whistleblower and officials in our government who are following the proper channels to report allegations of presidential impropriety, all while making blatant threats that put people at risk and our democracy in danger."

As Reason's Elizabeth Nolan Brown points out, Trump's tweets "are many things—irresponsible, divisive, and unbecoming of a president, to say the very least. His posts accusing Schiff of treason and suggesting he should be arrested (for comments Schiff made on the House floor recently) may even be unconstitutional."

So how should Trump be held accountable for his tweets, many of which could merit support for impeachment? Should lawmakers be able to access them? Should the American people be allowed to decide what they think of his erratic rants, many of which contain policy prescriptions? Or should one man have the power to press a button and erase it all?

Certainly not the latter.

There are plenty of First Amendment implications here. It's true that private companies are under no obligation to provide anyone a platform on which to speak—a point I have made on multiple occasions. For instance, Rep. Tulsi Gabbard (D–Hawaii) currently has a nonsensical lawsuit filed against Google; she accused the company of violating her free speech rights when it temporarily froze her campaign fundraising account after the first Democratic debate. The First Amendment prohibits the government from suppressing speech, not corporations.

But it is for that same reason that Harris's request is absurd; she is a senator seeking the highest office in the land. Meanwhile, she is pressuring someone to block the president's speech.

What's more, if Harris had it her way, conservatives would have endless fodder for their claims of tech censorship, which have been a thorn in Democrats' sides as they try to fend off Republican attempts to regulate speech online. With Trump offline, Twitter wars might die down—a victory Harris could claim.

Yet the ideological wars would only grow in size. Not only would a major tech platform have removed a sitting president's account, but it would have come at a liberal government official's behest.