A 12-Year-Old Girl Pointed Finger Guns at Other Kids. Cops Handcuffed and Arrested Her.

"The safety of our children in school is paramount, today more than ever," said the police chief. 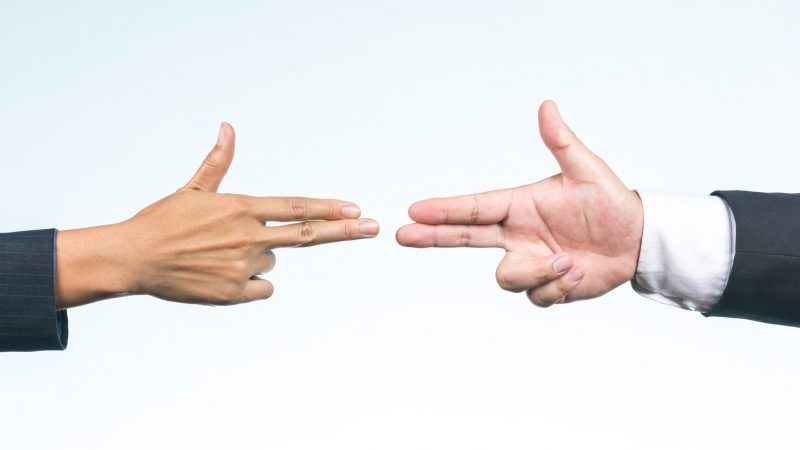 A 12-year-old girl who attends a middle school in Kansas City made her fingers into the shape of a gun and pointed at several of her classmates. These kids had bullied her relentlessly, her mother told The Kansas City Star.

Here's how the authorities at Westridge Middle School handled the incident: School Resource Officer Dana Harrison, the school's police officer, arrested the girl and escorted her off the premises in handcuffs. She was taken to a juvenile detention facility, and will face a felony charge of threatening to commit violence.

"I'm really worried about my granddaughter's future," the girl's grandfather told reporters. He'd been informed, he added, that she could be sentenced to a year in juvenile detention.

According to the police, the girl was asked by another classmate which five people she would like to kill. She then pointed finger guns at several other students—several of whom had picked on her relentlessly, her family claims—and finally on herself.

Neither the school's principal nor the resource officer immediately responded to a request for comment. But other authorities defended their decision to the Kansas City Star.

"The safety of our children in school is paramount, today more than ever," said Overland Park Police Chief Frank Donchez. "We have all seen cases where tragic incidents have occurred, and the first thing people say is, there were signs, why didn't they see the signs?"

A little girl lashing out at kids who were tormenting her is not a "sign" that the school's safety is gravely threatened. If even a small percentage of bullied kids turned into mass shooters, violence in schools would be an epidemic. In reality, it's not: Serious violence in schools remains rare.

These school authority figures—and others in countless districts across the country—clearly have the Parkland shootings in their minds as they overreact to mundane disciplinary issues involving students. The "sign" that something terrible was about to happen in the case of Parkland shooter Nikolas Cruz was not that he pointed finger guns at people; it was that he possessed a real gun and had threatened to use it to kill people. And this early indication of his possibly murderous intent did not go unnoticed: Cruz's acquaintances reported him to virtually every agency with authority to act, from the sheriff's office all the way up to the FBI. Parkland is a story, not of common people blindly ignoring some obvious danger, but of stunning incompetence.

What has happened to this Kansas City girl is also a story of government incompetence, albeit of a different sort. As The Kansas City Star reported, the girl is facing a felony charged for making threats. Actually bringing a gun to school would just be a misdemeanor.

When kids fight or threaten each other, the school's job is to teach them better behavior and hand out a punishment that is proportional to the wrongdoing. A 12-year-old girl is a child, still growing and developing. At most she should be clapping erasers or writing an apology essay, not sitting in jail. But the unfortunate truth is that the presence of cops in schools makes it vastly more likely than minor disciplinary matters will be handled by the police—especially during this current, seemingly never-ending moment of hysteria about school violence.