This week's demonstrations at NBA games are a refreshing reminder that Americans won't just "stick to sports." 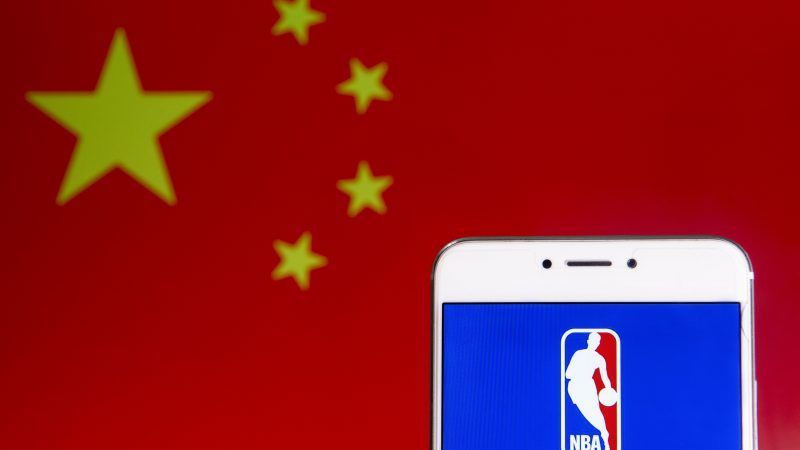 If the National Basketball Association (NBA) and its team owners wanted American fans and league employees to stop talking about China and just focus on the upcoming NBA season, they picked a really dumb way to make that happen.

On Tuesday night, security guards at Philadelphia's Wells Fargo Center ejected a pair of fans from a preseason game between the Philadelphia 76ers and the Guangzhou Loong Lions, a Chinese team. The fans had been holding signs reading "Free Hong Kong," and NBC Philadelphia reported that the fans were heard chanting the same slogan during the game. Video of the incident quickly circulated on Twitter.

The moment Sam Wachs and his wife are escorted out of the @sixers preseason game against a Chinese basketball team for yelling "Free Hong Kong." @6abc pic.twitter.com/3HlZxKXDzs

On Wednesday night, when the Guangzhou Loong Lions played a game in Washington, D.C., there were more protesters with more signs. One asked people to "Google Uighurs" in reference to the Muslim-minority group that's been systemically persecuted and forced into internment camps in western China. Others expressed support for the protests in Hong Kong. Again, the signs were confiscated and the fans were escorted from the arena.

But in trying to silence a handful of fans, the NBA has turned a minor public relations crisis into a full-blown Streisand Effect. And while prominent sports media outlets have not exactly covered themselves in glory by trying to ignore the story, it's now quickly becoming unavoidable. By Thursday evening, one of the protestors kicked out of Wednesday's game in Washington had taken to the pages of the New York Post to accuse the NBA of practicing "Chinese-style censorship and authoritarianism on American soil."

The NBA's crackdown on expressing support for Hong Kong's independence began after Daryl Morey, the general manager of the Houston Rockets, tweeted "Fight for freedom, stand with Hong Kong" last Friday night. The tweet was quickly deleted, but China (a huge and growing market for the NBA's product) retaliated by announcing that CCTV, China's state-run television network, would not broadcast NBA preseason games staged this week in Shanghai and Shenzhen.

Social media has made it impossible to contain the protests that have resulted from the league's attempt to repair relations with China's authoritarian Communist Party and its state-funded subsidiaries.

Some creative types want to sustain pressure. In less than 24 hours, a GoFundMe page seeking to raise money for "Free Hong Kong" shirts has received nearly $3,000 in donations. The shirts will be distributed outside the Golden State Warrior's arena in San Francisco. Organizer Lee Bishop says he wants to "hold our American corporations accountable to our American values and liberty that should be spread across the globe."

The NBA and its constituent teams are, of course, independent corporations free to do as they please when it comes to allowing political messages to be displayed during games. But it's also right to point out that the league has a history of being involved in political causes, like when it withdrew its annual All-Star Weekend event from Charlotte, North Carolina, in 2017 to protest the passage of a state law discriminating against transgender individuals. Moving that event to New Orleans didn't hurt the league's bottom line. Severing corporate ties to China and potentially losing hundreds of millions of Chinese fans would be financially costly. This has led some people to the reasonable conclusion that the NBA is woke only when being woke makes financial sense.

Exporting American goods and values—including cultural interests like basketball—has helped make the world a more peaceful place. Sending American sports celebrities to China is good for the players, and great for Chinese fans of basketball. But the NBA cannot expect to kowtow to China's demands for censorship without blowback from the folks at home. America is the land of the free and the mouthy.

As with the backlash against Activision Blizzard, an online gaming company that similarly tried to silence pro-Hong Kong opinions, demonstrations at NBA games this week are a refreshing reminder that Americans are often motivated to do even more the thing they are told they cannot do. What's more, our Constitution protects our right to do so.

If the NBA wants to forfeit the speech of its employees for money, it can. It can also bar fans from arenas for just about any reason. But in that case, American fans could give the league hell. T-shirts and signs may be only the start.

The NBA needs to think carefully about whether winning in China is worth losing in America.