The U.K. Must Ban Pointy Knives, Says Church of England

When the human condition resists perfection through legislation, the answer always seems to be more—and stupider—laws. 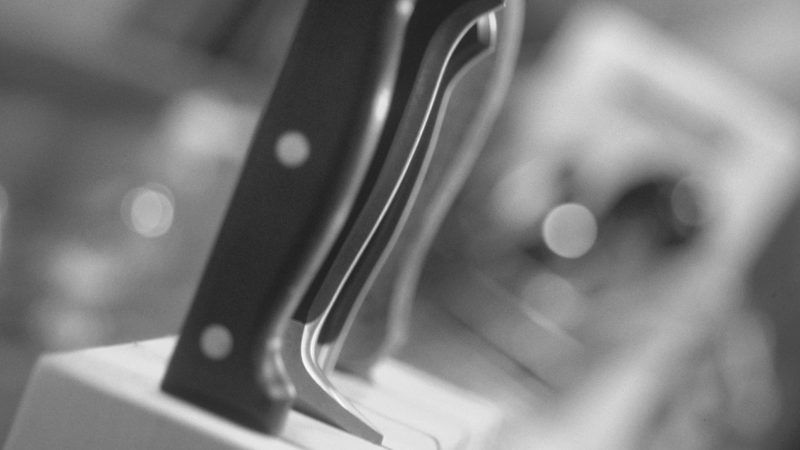 Despite a host of legal restrictions on firearms and knives, not to mention a society that increasingly resembles a panopticon in the thoroughness of the surveillance to which it's subjected, the U.K.'s crime rates remain stubbornly resistant to reduction. Last year, London's murder rate briefly overtook that of New York City—a feat likely to be repeated as crime continues its decline in the U.S.—and the latest U.K. figures show an increase in violent crimes committed with both guns and knives.

So, do right-thinking Britons propose loosening the country's tight rules regarding self-defense so that people can more easily deal with two-legged predators? Hell, no. Instead, they want to ban pointy knives. Yes, really—churchmen, physicians, judges, and lawmakers want to tightly restrict or completely outlaw the possession of knives with sharp ends.

The latest call for knife controls comes from the Church of England, the nation's officially sponsored religious franchise.

"We the undersigned are professionals and community leaders from across the UK who call on Government to see the sale of pointed domestic kitchen knives as a thing of the past," reads the not-a-parody open letter from the Diocese of Rochester, signed by church leaders, lawmakers, psychiatrists, academics, and the like. "Historically we needed a point on the end of our knife to pick up food because forks weren't invented. Now we only need the point to open packets when we can't be bothered to find the scissors."

The September letter would be easier to laugh of if it weren't signed by so many people who are in a position to turn it into law, widely reported as serious stuff indeed, and an echo of calls from elsewhere.

Just months ago, a Conservative member of Parliament made headlines when he took a different, but equally restrictive, approach to regulating sharp pieces of metal.

"Every knife sold in the UK should have a gps tracker fitted in the handle," insisted Scott Mann. "It's time we had a national database like we do with guns."

Mann took a lot of ribbing for the proposal, and even admitted that it was "a bit of a shit idea." But that's just because he was a step ahead of the mob. If he'd stuck with grinding off the pointy bits, he would likely have been hailed as a model of responsible opinion.

After all, U.K. Judge Nic Madge used his retirement speech last year to call for blunting cooking paraphernalia. "Kitchens contain lethal knives which are potential murder weapons and only butchers and fishmongers need eight or 10 inch kitchen knives with points," he said.

"We call on Government to see the sale of pointed domestic kitchen knives as a thing of the past," agrees John Crichton, a prominent Scottish psychiatrist who uses his position as head of the Royal College of Psychiatrists in Scotland to advance his crusade against anything with a sharp tip. "We urge them to take urgent measures to promote the sale of safe kitchen knife designs and restrict those designs which have been used in so many acts of violence."

The problem for Britons is that they're uncomfortably discovering the same frustrating limits that Americans have encountered; laws don't prevent people from doing illegal things, they just define the penalties when people are caught.

The U.K. has banned murder and assault, and it has imposed tight restrictions on the purchase and possession of many things that might be used as weapons. Yet crime stubbornly rises and falls—mostly rises these days, in the U.K.—without regard for what lawmakers put on the books.

The most recent British crime figures show a 3 percent increase in offenses involving firearms, despite restrictions that American gun controllers could only dream of imposing, and an 8 percent increase in offenses involving a knife or sharp instrument, to record levels. Excluding terrorist attacks, homicides are up again, on top of a 14 percent rise in 2018.

With guns already tightly bound in red tape, the responses have included many that would be familiar to Americans but applied to knives instead of firearms. Media outlets stage "stings" to show how easy it is to purchase something sharp, police agencies publish photos of lethal implements of destruction—or cease such publication out of fear of disturbing the delicate public—and politicians pledge extra resources to battle the crime "epidemic." To shame naysayers into silence and ease the passage of legislation and approval of funding, children get marched in front of TV cameras to put forward comprehensive lists of new programs, powers, and restrictions that look an awful lot like they were pulled off a shelf and reprinted by adult activists.

And, of course, very responsible people call for yet more "common sense" controls. Why do you need an "assault weapon"—or a carving knife with a point?

This should be taken as a warning to Americans suffering from badgering fatigue and tempted to surrender in hopes that the busybodies will just, finally, shut up. There doesn't seem to be an end—just an extension of the same tactics to new targets when the human situation inevitably proves impervious to perfection through the application of legislation. If their respective populations give in on the debates of the day, 20 years from now, Americans will be replicating the British debate over knives, and Britons will be probably be discussing the merits of restrictions on hammers and pointy sticks.

Knife control is supposed to be a joke—where control freaks take their next efforts when gun laws prove unenforceable and criminals decline to discontinue their efforts just because they've been rendered even more illegal. But British politicians took that joke and turned it into national policy. Now they want to double down on that policy because the bad guys still won't play along.

So, laugh at the proposals to ban pointy kitchen knives and to require people to grind the tips off the ones they already own—they're certainly ridiculous. But also take them as a demonstration that life can't be perfected by legislation, and there's no end point to the silliness if you insist on making the effort.