The National Basketball Association has spent decades investing in China. Should that matter when it comes to supporting human rights? 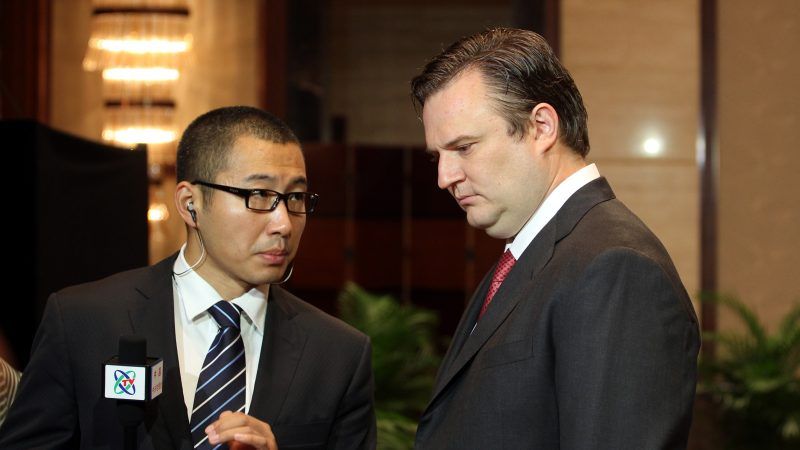 A single tweet by Houston Rockets General Manager Daryl Morey has set off one of the biggest crises in NBA history. Morey shared this image over the weekend, while the Rockets were in Japan for a preseason basketball game:

A damage control effort began immediately, with the National Basketball Association moving to protect its business interests in China.

Tillman Fertitta, who owns the Texas-based Landry's restaurant empire and purchased the Rockets last year for $2.2 billion, tweeted: "Listen. Daryl Morey does NOT speak for the Houston Rockets. Our presence in Tokyo is all about the promotion of the NBA internationally and we are NOT a political organization." Meanwhile, the Chinese media company Tencent, which is paying the NBA $1.5 billion over five years to broadcast games in China (which has more NBA fans than America has people), announced that it will not show Rockets games this season.

Will that ban hold if the Rockets make the playoffs, let alone the finals? I'm skeptical. You pay to broadcast regular-season games in order to broadcast the playoffs. With 1,230 regular-season games each year, few fans will care that they can't watch the Rockets clobber the Charlotte Hornets or the Washington Wizards in the slog of the regular season. But Vegas has the Rockets at 8-to-1 to win it all, behind only the Clippers, Lakers, Bucks, and 76ers. Even Chinese fans who are genuinely mad at Morey for supporting the Hong Kong protests will be madder still if they can't watch James Harden and Russell Westbrook face off against Joel Embiid and the 76ers or Giannis Antetokounmpo and the Bucks in June.

Rather than asking if China's response to Morey's tweet is more bite than bark, we're collectively talking—as we perhaps should be—about the responses from Rockets franchisee Fertitta ("franchisee" being the NBA's new term for "team owner"), Rockets star shooting guard James Harden, the NBA itself, and the constellation of American politicians who have emerged from their opposing trenches to condemn the NBA for kowtowing to the Communist Party of China.

Harden, who won the league's MVP award in 2018 and is either the best or second-best player (after Hakeem Olajuwon) to join the Rockets since they entered the league in 1967, also apologized for Morey:

We apologize. You know, we love China, we love playing there. For both of us individually, we go there once or twice a year. They show us the most important love. We appreciate them as a fan base. We love everything there about them and we appreciate the support that they give us individually and as an organization.

Morey quickly deleted the tweet and has since issued an apology of his own:

I did not intend my tweet to cause any offense to Rockets fans and friends of mine in China. I was merely voicing one thought, based on one interpretation, of one complicated event. I have had a lot of opportunity since that tweet to hear and consider other perspectives. I have always appreciated the significant support our Chinese fans and sponsors have provided and I would hope that those who are upset will know that offending or misunderstanding them was not my intention. My tweets are my own and in no way represent the Rockets or the NBA.

The NBA issued two statements about the tweet, one in English and one in Chinese. Here are the relevant parts of the English version, via NBA.com:

NBA Chief Communications Officer Mike Bass said the league recognizes that Morey's tweet "deeply offended many of our friends and fans in China, which is regrettable." Bass added that the league supports individuals "sharing their views on matters important to them."

"We have great respect for the history and culture of China and hope that sports and the NBA can be used as a unifying force to bridge cultural divides and bring people together," Bass said.

The Chinese version of the NBA statement appears to have been edited to play to that audience, the South China Morning Post reports:

The NBA said on its official Chinese social media account that it was "extremely disappointed" by Houston Rockets general manager Daryl Morey's "inappropriate" tweet about Hong Kong, which "severely hurt the feelings of Chinese fans."

Sens. Josh Hawley (R–Mo.), Ted Cruz (R–Texas), Rick Scott (R–Fla.), and Chuck Schumer (D–N.Y.) have all tweeted in support of Morey's right to support Hongkongers and against the Communist Party's decision to punish the Rockets and the NBA. They have also criticized the NBA's efforts to appease its business partners in China and preserve its relationship with Chinese fans.

There's a lot going on here, and it's not just about money—though it is definitely, absolutely, 100 percent very much about money.

That relationship was incredibly important to Houston and the NBA. Wang Zhizhi, the first Chinese national to play in the NBA, was drafted in 1999 by Houston's in-state rival, the Dallas Mavericks. He played 136 games across five NBA seasons, averaging nine minutes and four points per game. But Ming was a revelation and a bona fide star. He played in 486 regular-season games, averaging 32 minutes and 19 points. In 2016 Ming was inducted into the Naismith Memorial Basketball Hall of Fame, and in 2017 the Rockets retired his number and hung his jersey in the rafters. Were it not for his fragile feet—hardly uncommon in a man who stands 7'6″—he might've brought another championship to Houston.

Instead, Ming brought the NBA to China. In 2004, China hosted two games between Ming's Rockets and the Sacramento Kings—the first NBA games in China since the Washington Bullets visited in 1979. Thanks largely to Ming's stardom in the U.S. and the NBA's willingness to go where no American league had so eagerly gone before them, NBA teams have played a few preseason exhibition games in China every year since 2007. It's a way to grow the market, reward Chinese fans, and enrich NBA teams.

This relationship has helped the NBA more than it helped China, where basketball has been the national sport since before the Cultural Revolution. As Helen Gao wrote a few years ago in The Atlantic,

During the Cultural Revolution, Mao declared war against almost all Western bourgeois affections, from classical music to novels, but he never wavered in support of basketball. Deprived of all forms of cultural enrichment and lacking the most basic athletic equipment, children and young adults roamed around their neighborhoods, setting up boards and hoops in alleys and courtyards and pouring their energy into the simple game of shooting the hoops. "At that time, China had basically only two sports: basketball and ping pong," my father, a teenager during the height of the Cultural Revolution and a devout basketball fan told me. "If you were young and loved sports, you only got these two to choose from."

So yes, money is at stake, even if Tencent backs down on its ban at playoffs time. The $1.5 billion Tencent deal was supposed to be the first of many. There are also sneaker deals and other endorsements for NBA players, and connective strands of lesser import: Wish.com, an American e-commerce company that is heavily reliant on Chinese manufacturing, is a sponsor of the Los Angeles Lakers; the Chinese Basketball Association, meanwhile, announced this year that it will not sign any player currently barred from playing in the NBA. I suspect that the NBA's friendly relationship with the Chinese government also helps protect the league's intellectual property, in terms of both merchandise and streaming games.

China and the NBA have been growing this partnership for decades. We now know, thanks to Morey, that the cost of that partnership is a moratorium on criticizing China's government. Should the NBA pay that price? The league's answer, in the short term at least, appears to be "yes."

Critics of the league's decision to placate China rather than challenge the country's eye-popping record of civil liberties abuses are understandably miffed that the NBA has lost the conviction it showed when it pulled its 2017 All-Star Weekend event from Charlotte. In that case, the league was protesting North Carolina's Public Facilities Privacy & Security Act, which prohibited transgender men and women from using sex-segregated public spaces that do not correspond with the sexes listed on their birth certificates. What did that decision cost the NBA, its "franchisees," and its players? I don't know, but it was likely negligible. All-Star Weekend is a moneymaker for cities, and the NBA hosts it in a different city each year. The league had no problem shifting the event to New Orleans after pulling out of Charlotte, itself a weak NBA market whose team has sucked basically since joining the league in 1988.

The NBA also had no problem moving the event back to Charlotte for 2019, after North Carolina amended its bathroom law. Companies can do that kind of thing in America, because the private sector has real power here. The NBA, in particular, can do that kind of thing because the fan base here tends to be young, ethnically diverse, and more politically progressive than the NFL and the MLB fan bases.

But the NBA can't speak out in China, which leaves it in the unenviable position of choosing either to sacrifice the diplomatic and financial inroads it has made in the world's largest basketball market, or to turn a blind eye not just to the protests in Hong Kong but to the internment of more than 1 million Uighurs and the development of oppressive surveillance systems.

I suspect NBA Commissioner Adam Silver is pained and embarrassed that the league and its shareholders cannot be as bold in China as they are in America, but I bet he also knows that the NBA needs China more than China needs the NBA. Unless that changes, the NBA is going to play ball with the Communist Party.