"You gotta lower your ideals of freedom if you want to suck on the warm teat of China." 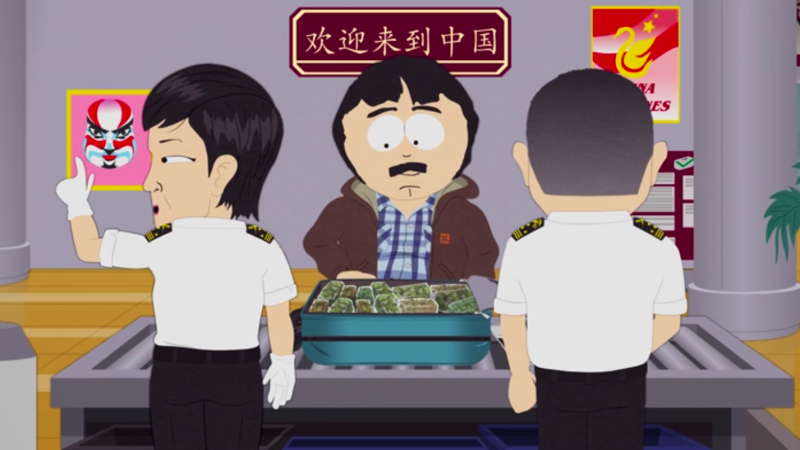 In a case of life imitating art imitating life, the Chinese government has purged all references to South Park from the country's highly restricted internet—following an episode of the show that criticized Chinese censorship.

"Band in China," the second episode of the show's 23rd season, satirizes China's heavy-handed crackdowns on free expression. The kids attempt to make a biopic about their new rock band, only to discover that they need to sanitize the plot to appease the Chinese government. Meanwhile, Randy Marsh gets sent to a Chinese prison, where he meets Winnie the Pooh—a reference to China's odd attempts to clamp down on the beloved bear for its supposedly resemblance Chinese President Xi Jinping. The episode also castigates Disney for making artistic concessions in order to remain in Chinese markets. "You gotta lower your ideals of freedom if you want to suck on the warm teat of China," one character says.

Unsurprisingly, China has not responded favorably. According to The Hollywood Reporter:

Now, those very same government censors, in the real world, have lashed back at South Park by deleting virtually every clip, episode and online discussion of the show from Chinese streaming services, social media and even fan pages.

A cursory perusal through China's highly regulated Internet landscape shows the show conspicuously absent everywhere it recently had a presence. A search of the Twitter-like social media service Weibo turns up not a single mention of South Park among the billions of past posts. On streaming service Youku, owned by Internet giant Alibaba, all links to clips, episodes and even full seasons of the show are now dead.

And on Baidu's Tieba, China's largest online discussions platform, the threads and sub-threads related to South Park are nonfunctional. If users manually type in the URL for what was formerly the South Park thread, a message appears saying that, "According to the relevant law and regulation, this section is temporarily not open."

The South Park ban proceeds news that Chinese broadcasters will no longer air the Houston Rockets' NBA games because a general manager tweeted in support of the Hong Kong protests. Both incidents should serve as reminders that China is a one-party state whose authoritarian government squelches freedom of speech at every turn.