Beto Goes to Kent State, Argues Only the Government Can Be Trusted With Guns

Someone should tell Beto who did the killing at Kent State. 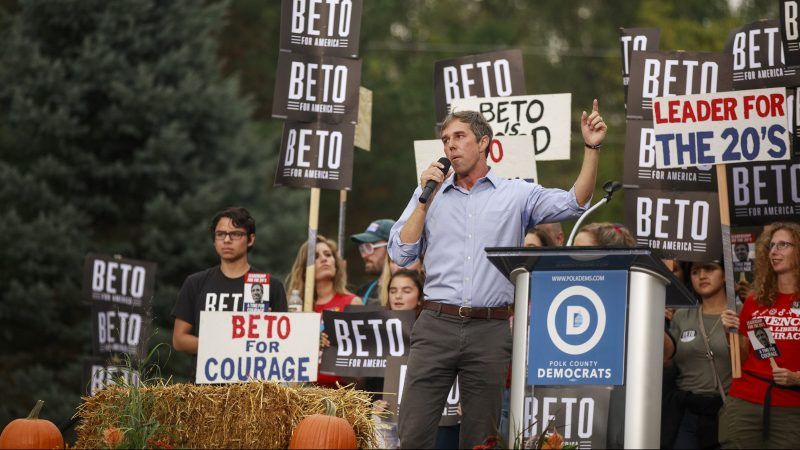 Of all the places to argue that only the government should be trusted with guns, Beto O'Rourke picked…Kent State University.

Kent State is, of course, the location of the infamous 1970 shooting that left four students dead and nine others injured. The shots were fired not by private citizens but by members of the Ohio National Guard, who shot at a crowd protesting America's involvement in the Vietnam War.

Invoking armed agents of the state gunning down unarmed civilians is an interesting way to argue that Americans would be better off if the government forcefully disarmed private citizens. But hey, I guess that's why we keep being told Beto's an "unconventional" candidate.

Yesterday, people brought assault weapons to our rally at Kent State—where 4 students were shot dead in 1970.

I told them nobody should show up with an AK-47 or an AR-15 to seek to intimidate us in our own democracy.

We need to buy back every single one of them. pic.twitter.com/U7N5fWUlvv

Since the mass shooting at a Walmart in his hometown of El Paso, Texas, former congressman O'Rourke has tried to jump-start his flailing presidential campaign by being the candidate who is most gung-ho about gun control. He made headlines at the most recent Democratic debate by promising, "Hell yes, we're going to take your AR-15." More specifically, he is proposing a ban on "the manufacturing, sale, and possession of military-style assault weapons"—that is, semiautomatic rifles with certain cosmetic characteristics.

"Americans who own AR-15s [or] AK-47s will have to sell them to the government," O'Rourke has explained. "We're not going to allow them to stay on our streets, to show up in our communities, to be used against us in our synagogues, our churches, our mosques, our Walmarts, our public places."

As J.D. Tuccille pointed out last month, there's scant evidence to suggest that such a policy could be implemented effectively, and it's pretty unclear how O'Rourke would get gun owners to comply with the law.

When New Jersey implemented a similar policy in the early 1990s, the state obtained a mere 18 guns of the estimated 100,000 to 300,000 firearms owned by Garden State residents—and only four were turned over voluntarily. Australia's much ballyhooed gun buyback program netted between 650,000 and 1 million firearms, about a quarter of the estimated number of guns owned by Australians at time. There are believed to be more than 350 million privately owned guns in the United States.

Taking the rest would require a massive mobilization of federal, state, and local law enforcement.

O'Rourke's plan to take guns out of private citizens' hands would not have prevented the Kent State massacre. But it would create lots of new opportunities for agents of the state to point guns at Americans who aren't a threat to anyone.