Local Man Uses Viral Fame To Raise $1 Million for Charity, Journalist Digs Up Offensive Tweets He Made at Age 16

Carson King is the latest victim of a cancel culture that's out of control. 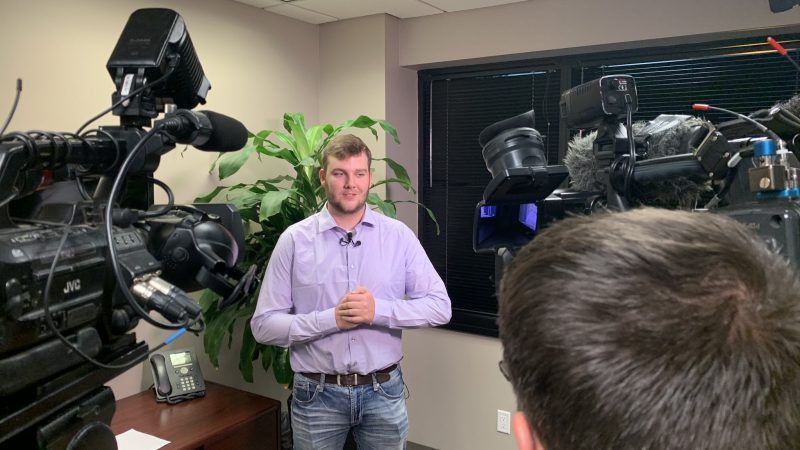 Cancel culture may have finally jumped the shark after an Iowa newspaper decided to include in a profile of a local man raising money for charity two racist tweets he published at age 16.

On Tuesday, the Des Moines Register published a profile of Carson King, a 24-year-old security guard who achieved viral fame after he was spotted on ESPN's College Gameday waving a sign that asked people to use the mobile payment app Venmo to send him beer money.

The TV coverage brought in $11,000, which King then announced he was donating to the University of Iowa Stead Family Children's Hospital. That declaration led to more donations, which prompted Beer company Anheuser-Busch and Venmo both to announce that they would match Carson's donations to the hospital. Anheuser-Busch even said they'd gift King a year's supply of beer, making him an Iowa legend. As of Tuesday evening, King reports raising over $1 million.

All in all, it's a nice feel-good story of a person using his surprise viral fame to help others.

In writing up this feel-good story, however, the Register decided to do some digging on King, eventually finding two, now-deleted, tweets from 2011—when King was 16 years old—that made racist jokes, one reportedly comparing black women to monkeys, another making a joke about black victims of the holocaust.

When asked about the tweets by the Register, King apologized profusely for them, saying they made him "sick" and "that's not something that I'm proud of at all."

Prior to the publication of the Register story, King issued a statement to local media expressing further regret.

"I am embarrassed and stunned to reflect on what I thought was funny when I was 16 years old. I want to sincerely apologize," said King. Social media, he said, had the power to bring people together and to make one's life very public.

The Register's description of King's teenage tweets was enough to get Anheuser-Busch to disassociate themselves with King, although the company says that it will still donate $350,000 to the hospital.

The paper's decision to publish the tweets also attracted heaps of scorn online, with many arguing that it's wrong to dig up someone's offensive tweets from high school, particularly given the remorse King already expressed, the sudden nature of his fame, and the legitimately decent charity work he was doing with that fame.

In response to these criticisms, the Des Moines Register Executive Editor Carol Hunter published an absolutely infuriating statement in which she described editors wrestling with whether to ignore the tweets, given King's age at the time and apparent remorse, or go ahead and risk ruining his life by publishing descriptions of them. They went with the latter option. Hunter's statement makes clear that this decision to publish the tweets was made prior to King releasing his own statement to the media.

Hunter's statement did little to quell anger at the paper. Critics on Twitter quickly found offensive tweets from Aaron Calvin, the reporter who wrote the profile of King. Calvin has since apologized and deleted those tweets. He is now being investigated by his employer.

The story is reminiscent of Ken Bone, who went viral after asking a question during a 2016 presidential debate only to have sexually explicit remarks he made on Reddit dug up by the media. It's also similar to Kyler Murray, the University of Oklahoma quarterback whose winning of the Heisman trophy was marred by USA Today deciding to publish an article on homophobic tweets he made when he was 15.

The fact that both King and the reporter writing about him had offensive tweets in their past should hopefully serve as a lesson: Everyone who's grown up with social media has posted content they regret and that doesn't necessarily reflect on their present-day values or beliefs.  Even progressive New York Times staffers have managed to slip up.

Treating a person's most intemperate tweets as worthy of public shame is an exercise in hypocrisy. What's worse is that we have graduated from using social media history as a way of divining a person's true nature to deploying that history cynically and maliciously, and in this case, to simply including a person's dumbest posts as a matter of routine: "Age, name, dumbest thing they've said online that we can find." Journalists can and should do better.

King's treatment by the Des Moines Register and the subsequent backlash suggest that the world would be a lot better place if we could ignore people's worst online moments, especially if they appear to be artifacts of their immaturity. As the great @alexander_pope might say were he alive today, "2 err is human, 2 forgive divine."