"Vaping is a health miracle to me," said ex-smoker Vicki Porter. "Not safe, but less harmful." 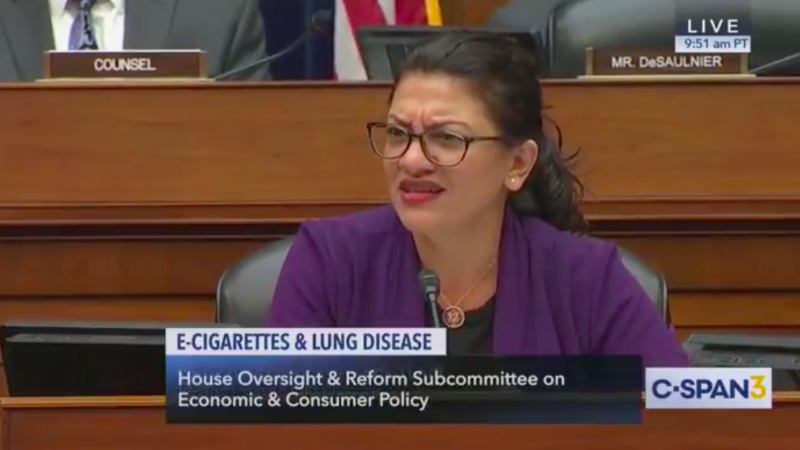 A House subcommittee hearing on the allegedly harmful effects of e-cigarettes took a bizarre turn when Rep. Rashida Tlaib (D–Mich.) asked the panel's only pro-vaping witness, Vicki Porter, whether she was a conspiracy theorist.

Tlaib had apparently noticed Porter winking at one of the Republican participants, and thought this was possibly indicative of something nefarious. Porter patiently explained that she knew this man personally and was just saying hello.

Tlaib's larger concern, of course, was that Porter had directly and quite pointedly challenged the tortured logic of the Oversight and Reform Subcommittee hearing. Contrary to the other participant's assertions that vaping was bad, full stop, Porter thanked e-cigarettes for helping her to quit smoking—and reminded Congress that there were millions of other adults just like her.

"Vaping is a health miracle to me," said Porter. "Not safe, but less harmful."

Rep. Debbie Wasserman-Shultz (D–Fla.) dismissed Porter's comments, saying, "I want to confirm the testimony of Ms. Porter is anecdotal, related specifically to her opinion, and she is not a public health expert."

Tlaib celebrated the anti-vaping witnesses for "speaking truth about this, because the long-term effects are very dangerous" before attempting to discredit Porter with the conspiracy-theorist smear.

Moments before, Tlaib had asserted secondhand smoke was "worse than directly smoking cigarettes." This, of course, is not true—indeed, it's utterly ludicrous. Who is the conspiracy theorist again?