Her future—and that of the planet—hasn't been "stolen" and the best way forward is through serious policy discussion, not histrionics. 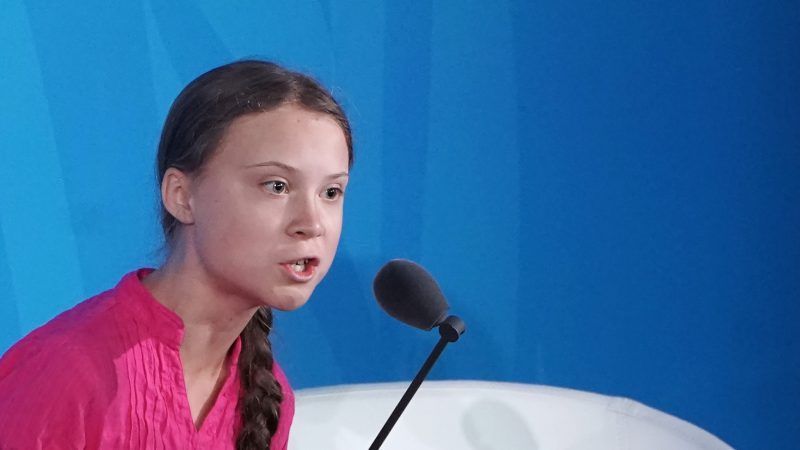 Appearing like some child messiah in a science fiction novel, the 16-year-old Swedish activist Greta Thunberg has just delivered what is arguably the fiercest jeremiad in America since Jonathan Edwards uncorked "Sinners in the Hands of an Angry God" in 1741. Speaking at the United Nations, Thunberg, who has been diagnosed with Asperger's syndrome and started protesting climate change in 2017 by staying out of school on Fridays, told the audience that it was responsible for destroying her life and that of the planet.

You have stolen my dreams and my childhood with your empty words. And yet I'm one of the lucky ones. People are suffering. People are dying. Entire ecosystems are collapsing. We are in the beginning of a mass extinction, and all you can talk about is money and fairy tales of eternal economic growth. How dare you!

Thunberg—and other doomsayers—are wrong about the environment and how best to mitigate the negative effects of climate change. You can watch her speech below:

Greta Thunberg to world leaders at the U.N. climate summit: "You have stolen my dreams and my childhood with your empty words" https://t.co/vhK7qb7Dgb pic.twitter.com/kArrseEu9f

To say that reactions to Thunberg are as extreme as her rhetoric is an understatement. When I tweeted about her remarks earlier today, my timeline quickly filled with replies such as "Hitler also liked using pigtailed propaganda girls" and "She is a prop and a tool for eco-communism. A propaganda icon that needs to be destroyed." Of course, President Trump weighed in, posting a clip of her speech and commenting sarcastically, "She seems like a very happy young girl looking forward to a bright and wonderful future. So nice to see!"

But despite the volume and vitriol of the attacks directed her way, it's vitally important that the worldview she represents and the policies she espouses are refuted. Like Rep. Alexandria Ocasio-Cortez (D–N.Y.), Sen. Elizabeth Warren (D–Mass.), and a host of other American politicians, Thunberg believes that we've only got a few years left to settle the fate of the planet, a basic tenet pushed by supporters of the Green New Deal and by most of the Democrats running for president. In fact, Thunberg thinks that "cutting our emissions in half in 10 years," the target invoked by many environmentalists, is too little, too late. She avers that such a drastic reduction only

gives us a 50% chance of staying below 1.5 degrees [Celsius], and the risk of setting off irreversible chain reactions beyond human control.

Fifty percent may be acceptable to you. But those numbers do not include tipping points, most feedback loops, additional warming hidden by toxic air pollution or the aspects of equity and climate justice. They also rely on my generation sucking hundreds of billions of tons of your CO2 out of the air with technologies that barely exist.

So a 50% risk is simply not acceptable to us—we who have to live with the consequences.

Such catastrophic thinking is similar to AOC's equally apocalyptic statement that "The world is gonna end in 12 years" and Warren's contention that "we've got, what, 11 years, maybe" to cut our emissions in half to save the planet. As Reason's Ronald Bailey has documented, such predictions stem from a fundamental misreading of a 2018 report from the Intergovernmental Panel on Climate Change (IPCC). That report offered up predictions in the growth of global economic activity, how it might be affected by climate change, and how reducing greenhouse gases might increase planetary GDP. It did not specify anything like a 10- to 12-year window after which extinction or amelioration is inevitable. Writes Bailey:

If humanity does nothing whatsoever to abate greenhouse gas emissions, the worst-case scenario is that global GDP in 2100 would be 8.2 percent lower than it would otherwise be.

Let's make those GDP percentages concrete. Assuming no climate change and an global real growth rate of 3 percent per year for the next 81 years, today's $80 trillion economy would grow to just under $880 trillion by 2100. World population is likely to peak at around 9 billion, so divvying up that GDP suggests that global average income would come to about $98,000 per person. Under the worst-case scenario, global GDP would only be $810 trillion and average income would only be $90,000 per person.

"There is no looming climate change 'expiration date,'" writes Bailey, a point underscored by Bjorn Lomborg, president of the Copenhagen Consensus Center, which promotes cost-effective policies to remediate climate change, hunger, disease, and other global issues. Lomborg notes that the IPCC itself

has found the evidence does not support claims that floods, droughts and cyclones are increasing.

The scientists have said, "there is low confidence in a global-scale observed trend" in drought, a "lack of evidence regarding the sign of trend in the magnitude and/or frequency of floods on a global scale" and "no significant observed trends in global (cyclone) frequency over the past century."

What's more, the scientists have found that current human-caused global warming cannot reasonably be linked to any of these extreme weather phenomenon-"globally, there is low confidence in attribution of changes in (cyclone) activity to human influence", "low confidence in detection and attribution of changes in drought" and low confidence "that anthropogenic climate change has affected the frequency and magnitude of floods". This doesn't mean there is no problem－just that the facts matter.

There are only better and worse ways to deal with coming changes. Contra Thunberg, the better ways don't demonize economic growth as a problem but as a solution. "The most inexorable feature of climate-change modeling isn't the advance of the sea but the steady economic growth that will make life better despite global warming," writes science journalist Will Boisvert. The environmental Kuznets curve, by which countries get wealthier and their citizens demand a cleaner environment, is the rule, not the exception. Such a dynamic is predicated upon economic and technological innovation that would be almost impossible under the sort of regulations promulgated by Green New Dealers and activists such as Thunberg and Naomi Klein, who wants to "decimate the entire neoliberal project" in the name of environmentalism. Environmental commons tend to deteriorate as countries begin to develop economically—but once per-capita income reaches a certain level, the public starts to demand a cleanup. It's a U-shaped pattern: Economic growth initially hurts the environment, Bailey reminds us,

but after a point it makes things cleaner. By then, slowing or stopping economic growth will delay environmental improvement, including efforts to mitigate the problem of man-made global warming.

Greta Thunberg's histrionics are likely heartfelt but neither they nor the deplorable responses they conjure are a guide forward to good environmental policy in a world that is getting richer every day. For the first time in human history, half the earth's population is middle class or wealthier and the rate of deaths from natural disasters is well below what it was even a few decades ago. Protecting all that is just as important as protecting the environment and, more importantly, those two goals are hardly mutually exclusive.