Bernie Sanders Thinks Every Billionaire Is a Policy Failure

Sanders has proposed a wealth tax to eliminate billionaires and fund his expensive domestic policy agenda. 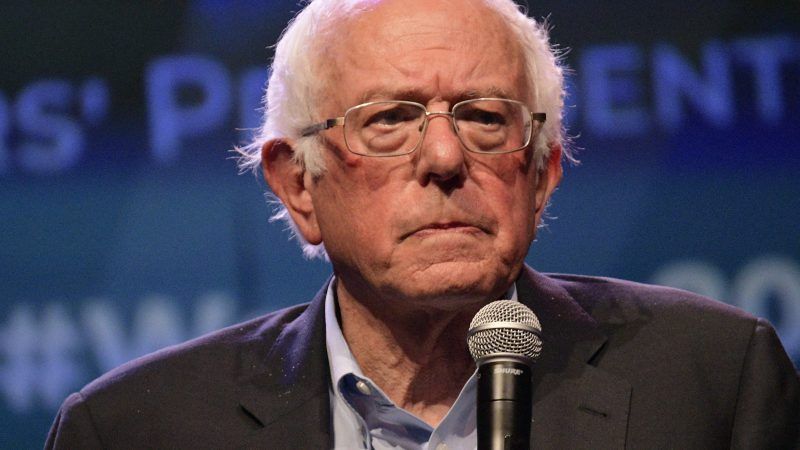 On Tuesday, Sen. Bernie Sanders (I–Vt.) rolled out his plan for a wealth tax on families whose net worth exceeds $32 million. The purpose of the tax is two-fold: raise revenue for the senator's high-spending domestic agenda, and eliminate supposedly unjust concentrations of private wealth.

That would include anyone worth more than $1 billion, according to Sanders, who tweeted out The New York Times coverage of his proposal with the caption "billionaires should not exist."

Billionaires should not exist. https://t.co/hgR6CeFvLa

This would supposedly raise $4.5 trillion over 10 years, which would then be spent on Sanders' $2.5 trillion housing proposal, universal childcare, and a portion of his $32 trillion Medicare For All plan.

His plan is similar to a wealth tax proposed by Sen. Elizabeth Warren (D–Mass.) earlier this year, which would tax fortunes that exceed $50 million.

Despite the ambitious aims of Sanders' wealth tax proposal, there are good reasons to doubt that it will bring in nearly as much revenue as he is projecting, let alone that it will abolish billionaires.

For starters, the difficulty in valuing the wealth held by the rich on a year-to-year basis would make a wealth tax hard and expensive to administer compared to other forms of taxation.

"The uber wealthy tend to have very hard-to-value assets. They own more than publicly-traded stock, such as real estate holdings, trusts, and business ownership interests," wrote Nicole Kaeding and Kyle Pomerleau for the Tax Foundation in January, when evaluating Warren's wealth tax proposal. "It is difficult to value these assets on an ongoing basis. Imagine a large privately-held company—its value could change almost daily. How would the tax handle these fluctuations?"

The current estate tax, a one-time wealth tax on inheritance, is already a headache for the Internal Revenue Service to administer, Kaeding and Pomerleau point out. The administration of a yearly wealth tax would be even more difficult.

Politically expedient or economically necessary carve-outs and loopholes will also reduce the revenue one can expect a wealth tax to generate, says Chris Edwards, a tax policy scholar with the Cato Institute.

"If they were passed into law there would be all kinds of exemptions and exceptions like farmland. Rich people would move their wealth to those exempted areas and the government wouldn't raise that much money," he says.

This, adds Edwards, is exactly what happened in the 12 European countries that adopted wealth taxes. Revenue was disappointing, raking in on average about .2 percent of GDP. In the U.S. context that would work out to be a little under $40 billion a year, or about 10 percent of what Sanders is claiming his wealth tax will generate.

All but three of the European countries that adopted a wealth tax have since repealed it, citing low revenues, high administration costs, burdensome effects on entrepreneurship, and capital flight.

Sanders has a few ideas on how to make administration easier and prevent the rich from evading his wealth tax, including a "national wealth registry," a 100 percent audit rate for billionaires, and a 40-60 percent tax on wealthy emigrants.

"The left-wingers have this idea that most wealth is gold bars underneath the mattresses of rich people," Edwards observes. "Most wealth is actually active business assets. It's the value of the assets that are actively producing and employing people in production."

Taxing these business assets would, in turn, mean less capital investment, argues Edwards, and therefore fewer jobs or lower wages for the workers who would have otherwise been made more productive by that capital investment.

The innumerate problems with a wealth tax, coupled with the fact that much easier means exist for the government to shake down the wealthy, suggests that Sanders' proposal is less about policy and more about signaling.

That is something Reason's Peter Suderman argued in a recent video, observing that "the wealth tax is best understood, not as a revenue raiser, but as a symbolic declaration of opposition to the existence of outsized wealth, regardless of how it was obtained."