Plus: How anti-tech lawmakers are beholden to "Big Telecom," the triumph of hard seltzer, "abortion reversal" law nixed, and more... 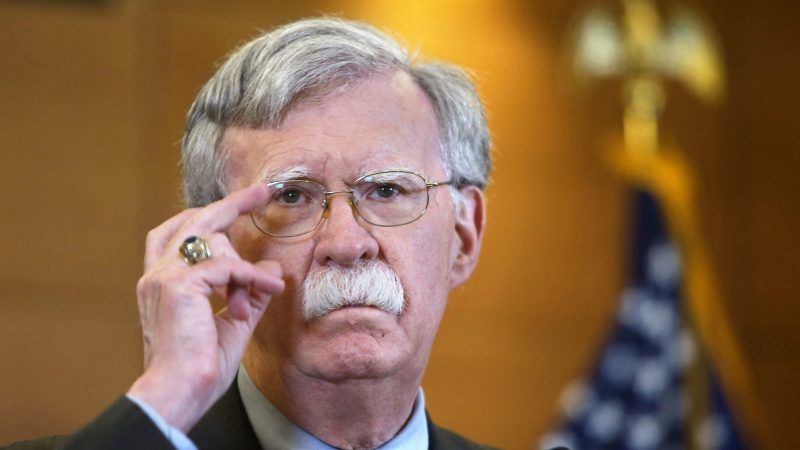 John Bolton has been dismissed, and folks on the left and right are celebrating. The warmongering and walrus-mustachioed national security advisor lasted just 15 months in the Trump administration—thank goodness. As Christian Britschgi wrote here yesterday, "the fact that Bolton will no longer have a direct role in setting U.S. foreign policy is a huge win for those who think the U.S. should be fighting fewer wars."

Bolton claimed on Twitter that he had not been fired and the president only said so because Bolton had offered to resign. But even if that's the case, I have to say I'm with Stephen Colbert on this one.

"I have never been more grateful for the president's pettiness and stupidity," said Colbert on last night's Late Show. "Because today, he was stupidly petty enough to save us from a very smart warmonger."

Or, as Jacobin writer Liza Featherstone nicely puts it: "The disappearance of John Bolton from a position of power is a net gain for humanity no matter who made the decision and no matter what the reason."

Trump's decision to ditch his national security advisor comes as the famously hawkish Bolton butted heads with others in the administration about Afghanistan. Trump wanted to invite Taliban leaders to Camp David for peace talks, which Bolton opposed, and to withdraw more troops from Afghanistan than Bolton wanted to bring back. And this was far from the first time Trump and Bolton disagreed on foreign policy matters, with Bolton ballyhooing for interventions in Iran, Venezuela, and elsewhere. (The president apparently joked that Bolton even wanted to invade Ireland.)

"Washington can and will focus for days on litigating that question of who called off the relationship," notes Jim Newell at Slate. "The important thing, though, is that John Bolton, whose proximity to the president's ear made the world a more dangerous place, is gone."

Financial Times writer Edward Luce suggests that the firing of Bolton "ends Donald Trump's hawkish phase." With Bolton out of the picture, it "paves the way for the president to open talks with the Iranians, which he has long wanted and Mr Bolton has fiercely resisted. It would not be a wild exaggeration to say that prospects for world peace rose markedly on Tuesday."

On Fox News last night, Tucker Carlson—who has referred to Bolton as a "tapeworm" infecting Republicans—cheered on Bolton's dismissal, albeit with the nonsensical assertion that Bolton was a man of the left.

Laura Ingraham said on her show that she liked Bolton but he wasn't a good fit in the Trump administration, since "Trump's allegiance isn't to any particular process or to any particular cabinet member" and "he came like a freight train at the old GOP foreign policy establishment that had gotten us bogged down in two costly wars."

"With Bolton gone, the Trump administration is now almost free of influence and advice from the old Republican Party," writes The Atlantic's Graeme Wood:

Neither the so-called neoconservative wing of the party, which had influence under George W. Bush, nor the Cold War Republicans, who held power before him and of whom Bolton is a late example, remain, with the exception of Attorney General William Barr.

One gets the impression that Wood finds this to be a dismaying thing ("also absent is anyone other than Barr with pre-Trump White House national-security experience"). It's not hard to find similar sentiments in other establishment circles—especially among Democratic leadership.

John Bolton's sudden departure is a symbol of the disarray that has unnerved our allies since day one of the Trump Administration. Steady leadership & strategic foreign policy is key to ensuring America's national security. https://t.co/MQIYet8pnA

I'm no Bolton fan, but the world is coming apart, and the revolving door of U.S. leadership is disappearing America from the world just at the moment where a stable American hand is most needed.

Rather than revel in Bolton's departure as a good sign for global affairs, Democratic leaders have taken it as yet another opportunity to slam Trump. And in so doing, they're implicitly backing the belligerent Bolton mindset. Which I suppose should come as no surprise…

Bolton may well have been the GOP "tapeworm" Carlson conjured, but his brand of foreign policy machismo—blind optimism in U.S. intervention mixed with blithe indifference to the lives of both American troops and those we drop bombs on—could be better likened to a bunch of cockroaches. Pervasive. Seemingly indestructible. Indiscriminate in their infestations. And—no matter where they appear—needing to be stamped out.

"While Silicon Valley faces an endless cavalcade of outrage, the telecom sector is suddenly seeing no scrutiny whatsoever," notes Karl Bode at Techdirt. But it's been "Big Telecom" that has been driving calls for heightened action against internet companies.

It's routinely understated how telecom lobbying, not a sincere worry about market power or privacy, is what's driving much of this current policy paradigm in DC (including much of the hyperventilation over nonexistent Censorship of Conservatives). The telecom sector is pushing hard into an online advertising sector traditionally dominated by Silicon Valley. As such, telecom lobbyists have spent several years now pushing to hamstring their direct competitors with the help of cash-compromised lawmakers and full blown regulatory capture.

Yet somehow, there are still a lot of folks in tech policy circles who see the lopsided focus on "big tech" as entirely authentic, and any failure to police telecom as somehow coincidental.

Millennials are drinking staggering amounts of hard seltzer instead of beer. In the most recent reported sales figures, White Claw and Truly outsold every craft beer brand put together. In July, White Claw claims it outsold Budweiser. Yes, Budweiser. https://t.co/3tKc5e0gQb

(I take back all my defenses of my generation.)

Interestingly, the way these beverages are made lets them avoid the stiffer taxes placed on spirits relative to beer and wine:

All of the seltzers are brewed, not formulated. It's an important distinction, because of the taxation regulations of the federal and state governments. If beverage alcohol is brewed, it is taxed at a much lower rate than beverage alcohol that is distilled after brewing. (Wine and cider are taxed at an intermediate rate.) If these seltzers were actually "spiked" with vodka or neutral grain spirits, they'd be significantly more expensive on the shelf thanks to higher taxes.

This church is trafficking people, including under-age girls. Will we see any major anti-traffickers or orgs talking about this story? Give you ONE guess. https://t.co/5PFz8GmYYH