It's a nasty mix of police militarization and civil asset forfeiture. 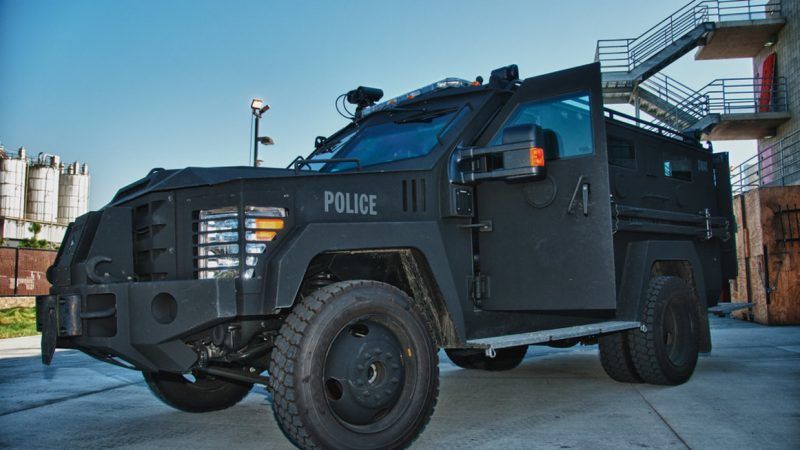 On Wednesday, the Sheriff's Office in Linn County, Iowa, announced the purchase of a BearCat G2 armored vehicle with $297,061 in funds obtained via civil asset forfeiture.

Although Iowa has established limits on asset forfeiture, the practice is alive and well in the state. In 2017, the state legislature passed a law requiring a criminal conviction before property forfeiture, as law enforcement could previously seize assets based solely on suspicion. Oddly enough, the change only applies to possessions valued at less than $5,000, meaning more valuable belongings can still be taken by the police without a conviction.

In 2018, Iowa's Supreme Court reined in other parts of the practice, including requiring courts to verify that police legally confiscated property before considering a claim on those goods.

Proponents say that asset forfeiture stops crimes at their roots; if law enforcement officers are able to cut off the tools used to commit a crime—such as the car driven during a drug exchange—then crime rates should decrease, the thinking goes. In practice, though, it has a negligible impact on crime rates, and merely provides a perverse incentive for police to seize as much property as possible in order to fund their departments. In Iowa, for example, police get to keep 100 percent of the proceeds.

This case provides the consummate example, considering that the Linn County Sheriff's Office opted for an exorbitantly expensive armored vehicle at the cost of the community.

As A. Barton Hinkle points out in Reason, there are perhaps some instances when a police department would understandably want to use an armored vehicle. If "a police officer gets shot approaching a building," he writes, and "he's bleeding out in the street and the shooter is still active, you don't want to two plainclothes detectives with a stretcher trying to get him to safety."

"Armored personnel carriers also can prove useful during riots and other forms of urban unrest," he adds.

But those two situations are few and far between. They're also hard to justify given that police deaths are near record lows.

Civil asset forfeiture is an unjust practice which has little to no bearing on crime rates. And that was perfectly demonstrated here, bearing in mind that unfairly seized funds have not been used to cut down on crime in the slightest, but rather to militarize the police.