The Rhode Island attorney general and state police are investigating a video of a correctional officer driving through a wave of protesters. 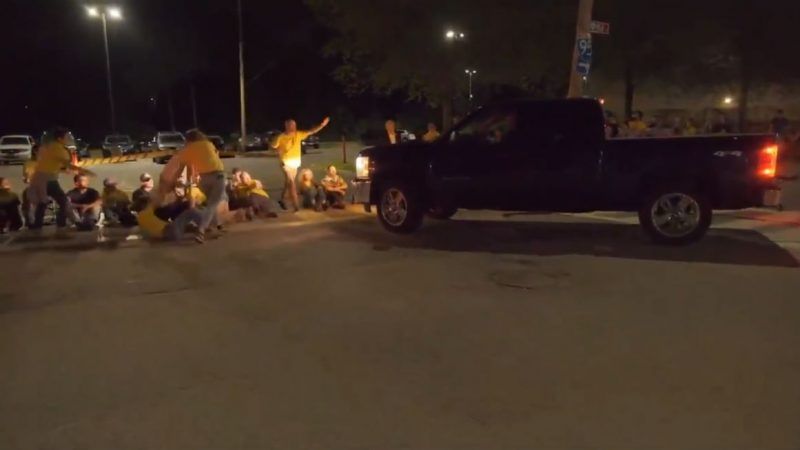 A correctional officer who was videotaped driving a truck through a crowd of anti-Immigration and Customs Enforcement (ICE) protesters has reportedly been placed on leave.

Newsweek reports that the protesters blocked the entrance to the facility by linking arms. As they were demonstrating, a black truck slowly approached the protesters. After honking the horn, the driver continued through the line of people. Protesters can be heard screaming and seen jumping on the back of the truck to urge the driver to stop in a video of the incident, which was shared online:

BREAKING: Here is HD video of an ICE guard driving his truck into us as we sat peacefully blocking the Wyatt Detention Center.

We're putting our bodies on the line because we see the camps and the roundups. We've learned from our ancestors: NEVER AGAIN FOR ANYONE. pic.twitter.com/KnOu5xoOEb

Two people were taken to the hospital as a result.

Protesters tweeted that they were pepper-sprayed by other guards following the confrontation with the truck.

Since news of the story broke, Capt. Thomas Woodworth, the suspected driver and a correctional officer at the detention center, has been placed on administrative leave.

A Thursday statement from the Rhode Island Attorney General's Office said that the office will work with the Rhode Island State Police to conduct an investigation into the events. "Peaceful protest is a fundamental right of all Americans; it is unfortunate last night's situation unfolded as it did," it read.