Trump Wants Israel to Bar Reps. Omar and Tlaib. He Says Allowing a Visit Would Be 'Weakness.' He's Wrong. 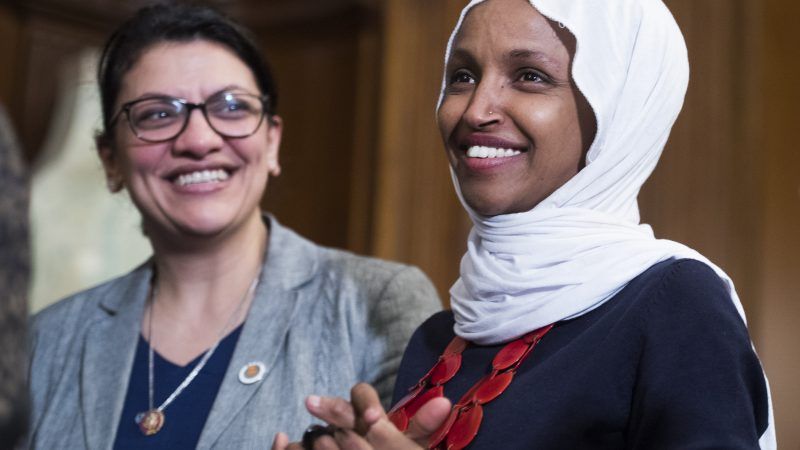 President Donald Trump on Thursday publicly called for Israel to bar Reps. Rashida Tlaib (D–Mich.) and Ilhan Omar (D–Minn.) from entering the country. After originally expressing that he would allow the visit, Prime Minister Benjamin Netanyahu followed Trump's tweet by banning both women from coming.

While Stephanie Grisham, the newly minted White House press secretary, told the media that Trump voiced no such desire, the president took to Twitter just an hour later, calling the two congresswomen a "disgrace."

It would show great weakness if Israel allowed Rep. Omar and Rep.Tlaib to visit. They hate Israel & all Jewish people, & there is nothing that can be said or done to change their minds. Minnesota and Michigan will have a hard time putting them back in office. They are a disgrace!

Tlaib and Omar are both critics of Israel who support the Boycott, Divest, and Sanction (BDS) movement, which seeks to punish the country for its treatment of Palestine. Netanyahu cited their support for BDS as the chief reason for his decision.

"As a vibrant and free democracy, Israel is open to any critic and criticism, with one exception: Israel's law prohibits the entry of people who call and operate to boycott Israel, as is the case with other democracies that prevent the entry of people whose perception harms the country," he said in a statement.

That's a pretty big exception. The country is open to any critic, he says, excluding those who use their freedom of association to combat what they view as a violent infringement on Palestinian human rights. Trump, meanwhile, has demonstrated once again that he'd rather score cheap political points than uphold cherished American ideals like free expression.

Both congresswomen have a history of wielding incendiary and loaded tropes to drum up sympathy for Palestine. Omar notoriously tweeted in 2012 that Israel had "hypnotized the world," and earlier this year, she called for more conversation around "the political influence in this country that says it is OK for people to push for allegiance to a foreign country."

Omar's critics pointed out to her that these are popular talking points among antisemites and conspiracy theorists. While she apologized for her remarks, she contends that such statements were a commentary on money in politics, akin to her criticisms of the National Rifle Association (NRA). However, Omar's seemingly never-ending string of ad hominem insults, in which she suggests that anyone who disagrees with her is on some nefarious character's payroll, is a fruitless way to approach political and policy debates.

That there are more nuanced ways to discuss the conflict between Israel and Palestine shouldn't matter when it comes to deciding whether or not two American legislators are permitted to enter Israel. They are not violent, the U.S. is an ally of Israel, and Congress sends billions of dollars to Israel each year. Diplomatic decorum suggests they should be allowed entry, just as the U.S. has granted safe passage to critics of American foreign policy for the United Nations General Assembly in New York.

What's more, their visit could have been an opportunity to engage the two congresswomen on where they come up short—particularly as it relates to the tactics used by Hamas, a Palestinian terrorist group. As David Brinn writes at The Jerusalem Post:

Tlaib and Omar need to be let in and allowed to see what's going on in Ramallah, Hebron and east Jerusalem. And every effort should be made by Israel to meet with them and present the other side of the coin. If Tlaib and Omar decline, it will be their loss—but Israel will have done the right thing. Now, all we've done is give Israel's detractors a great gift.

And that gift comes at Israel's expense. Netanyahu will not wound the BDS movement by ostracizing the congresswomen; he will only embolden it. The prime minister opted to silence instead of engage—a surefire strategy to lose the long game.