The same federal agency that has led a crackdown on vaping is now trying to make smoking even less appealing. 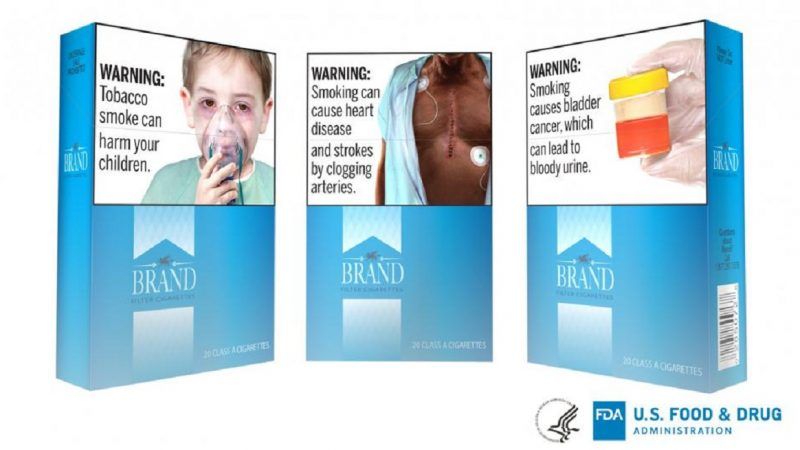 "While most people assume the public knows all they need to understand about the harms of cigarette smoking,  there's a surprising number of lesser-known risks," said Acting FDA Commissioner Ned Sharpless in a statement announcing proposed new regulations. "Given that tobacco use is still the leading cause of preventable disease and death in the U.S., there's a lot at stake to ensure the public understands these risks."

These "lesser-known" risks include lung disease, head and neck cancer, bladder cancer, erectile dysfunction, and diabetes. The new labels will also warn smokers about the damage their smoking might be doing to children and unborn babies.

This is not the first time that the FDA has tried to put graphic warning images on cigarettes. In 2009, Congress passed a law giving the agency the power to regulate tobacco products for the first time. That same law actually required the FDA to come up with graphic health warnings that would cover half of every cigarette packet and 20 percent of every tobacco advertisement.

In 2010, the FDA unveiled some remarkably gruesome warning labels that looked closer to a death metal album cover than something from a public health agency. The proposed labels included a picture of cadavers, diseased lungs and teeth, and a baby weeping in an incubator.

In 2012, a federal court ruled that the FDA's new warning labels amounted to a First Amendment violation. By sensationalizing and overhyping the risks of smoking, the agency was compelling speech on the part of tobacco companies, U.S. District Court Judge Richard Leon ruled.

Any warning labels, Leon ruled, would have to be purely informational.

The ruling left the FDA between a rock and a hard place. By law, they were required to put new graphic labels on cigarette packets. The 2012 court ruling left them unsure about which warning labels might pass constitutional muster.

The result, The New York Times reports, is that the agency dragged its feet for years until a 2016 lawsuit by anti-smoking advocates eventually forced them to take another stab at crafting warning labels.

The U.S. Court of Appeals for the 9th Circuit ruled that San Francisco's requirement that these warnings take up 20 percent of any soda advertisement was overly burdensome. A smaller warning label could have achieved the government's public health interests, the court said.

Whether tobacco companies will try to challenge these new, still pretty gruesome, warning labels on similar First Amendment grounds remains to be seen.

The FDA's draft rules will still be subjected to public comment and revision.

At the same time as the FDA is trying to get people to quit smoking with flashy new warning labels, the agency is also making smoke-free alternatives to cigarettes less appealing.

Last week, the FDA ordered four companies to remove 44 flavored vaping and hookah products from the market. The agency has been cracking down on flavored e-cigarette products as part of its anti-teen vaping efforts.

As Reason's Jacob Sullum has noted, however, many adults prefer flavored e-cigarette products. Making e-cigarettes less attractive runs the risk that people will be less likely to switch from traditional cigarettes to less dangerous vaping products.

Cigarette smoking, like so many vices in life, involves a trade-off between risk and reward. Fortunately for those concerned about the health effects of smoking, there is no shortage of non-profit groups and government agencies who are happy to stress the risk side of that equation.

The FDA's new warning labels, however, go beyond the mere provision of information. The agency is actively hijacking tobacco companies' products in order to spread its own anti-smoking message. Relaying public health information shouldn't have to come at the expense of corporations' free speech and property rights.