Nine people were injured during the weekend's protests in Hong Kong, including one woman who might be permanently blind after a violent encounter with the police. 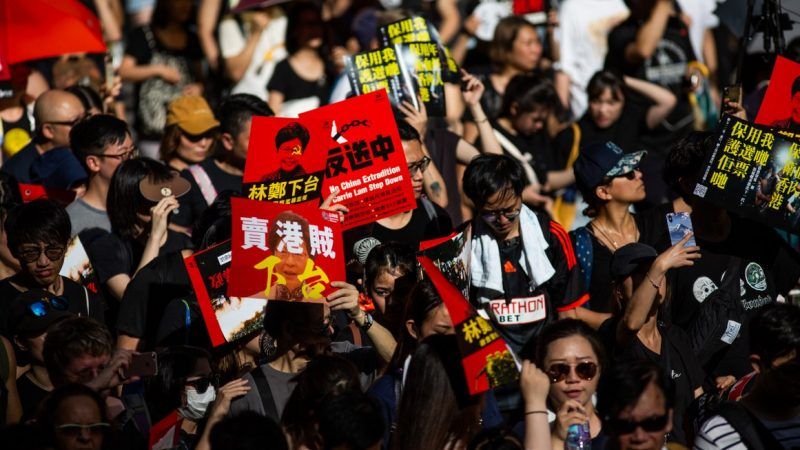 Demonstrations in Hong Kong escalated over the weekend when at least nine protesters were injured by police. One woman will likely be permanently blind after a police officer shot her in the eye with a non-lethal bean bag round.

2. Shooting a female protester in close distance, which hit her in the right eye and blinded her permanently, according to information from doctors.

Bean bag rounds are supposed to immobilize and cause muscle spasms, not death or serious injury. When using these rounds, police are supposed to target extremities, not necks or faces. It's not clear whether the injured woman was a protester or a medic. Her image is now being used as a symbol of resistance.

We will remember the girl who lost an eye tonight. Hong Kong Police, you're monsters! #HongKongProtests #HongKong #LiberateHongKong pic.twitter.com/FxgEecVtzz

The conflict between Hong Kong protesters, their own government, and mainland China—now in its 10th week—started when Hong Kong legislators began considering an extradition treaty that would allow the Hong Kong government to extradite those accused of crimes to Taiwan and the People's Republic of China (PRC). Many Hongkongers, who enjoy basic democratic norms and a far better-functioning criminal justice system, object to the criminal justice practices of the PRC in mainland China. Since the '90s, Hong Kong has operated as a special economic zone. It is technically a part of the PRC, but is statutorily semi-autonomous and has a semi-democratically elected legislature.

To many protesters, allowing extradition would winnow away at the basic rights of Hongkongers and cede far too much power to the PRC, tilting an already-tenuous balance to mainland China's authoritarian government.

Police also fired tear gas into subway stations, posed as protesters, and arrested at least 12 protesters in the last day. More than 500 people have been arrested over the last 10 weeks of protests.

Jocelyn Chau, a community organizer and pro-Democracy politician who hopes to be elected to local government in November, was live-streaming the event for social media—not actively participating in protests or wearing protective gear—when she was beaten by cops and arrested.

A male police officer ignored a Jocelyn Chau's defends and pressed harder even after she said "I can't breathe," requested to be seen at a hospital, and identified herself as the community officer.(tbc)#HongKong #HongKongPolice #HongKongProtesters #HongKongProtest pic.twitter.com/EN6IhNeqKM

Reporters and medics were also allegedly targeted and harassed by Hong Kong police.

As all this was going on in subway stations and on the streets, airport protests continued. On Monday, authorities shut down all flights in and out of Chek Lap Kok airport, an international hub which typically schedules more than 1,000 flights daily—one of the busiest on the continent. A government spokesperson in Beijing said protesters show "signs of terrorism," despite the peaceful presence they've maintained over the last few days in the airport. Another Chinese government spokesperson said, "These violent, illegal actions must be met with a determined legal crackdown, with no softening of hands or any sign of mercy," per the Los Angeles Times.

As of a few hours ago, video footage spread by one of China's national English-language newspapers shows tanks lining up in Shenzhen, which borders Hong Kong. It's unclear at this point whether Chinese military forces will be moving in or whether this is China flexing.

Meanwhile, China continues to put out propaganda videos in an attempt to erode Hongkongers' credibility:

I love this Chinese propaganda video. At 1:08 it shows a picture of two overturned traffic cones to show the destruction the Hong Kong protesters are causing https://t.co/yavne6Z58Q

More on the situation in Hong Kong here.