If "the notion that we can identify mass killers before they act" is a "fiction," the conventional policy responses to mass shootings are unlikely to be effective. 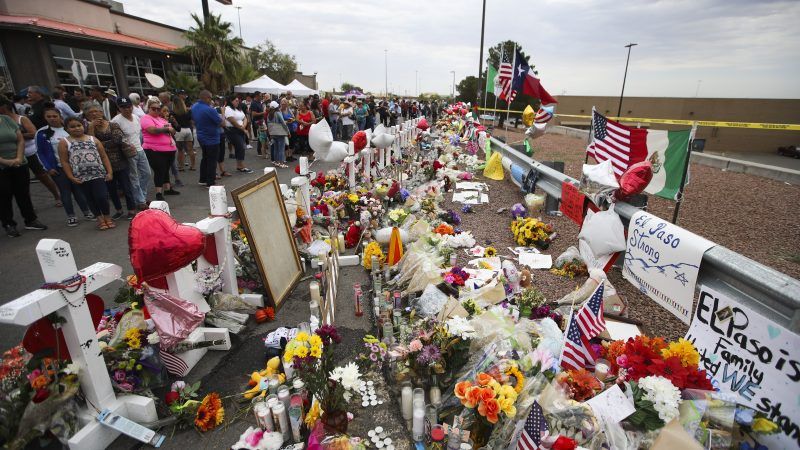 Writing in The New York Times, psychiatrist Richard Friedman notes that "experienced psychiatrists fare no better than a roll of the dice at predicting violence." He therefore thinks it is unrealistic to rely on the mental health system to identify future mass shooters and stop them before they kill anyone, as Donald Trump has suggested. Yet Friedman argues that "more effective policies might involve gun control, including enhancing background checks and expanding so-called extreme risk protection orders, which would allow law enforcement to temporarily remove firearms from people deemed potentially violent."

Those policies, of course, rely on identifying people who are prone to violence. Is there any reason to think that background checks or "extreme risk protection orders," authorized by so-called red flag laws, will accomplish that task better than "experienced psychiatrists"?

Federal law also bans gun possession by people convicted of drug offenses and other nonviolent felonies; people who have ever been subjected to involuntary psychiatric treatment, regardless of why or of how much time has elapsed; illegal drug users, including cannabis consumers (even in states where marijuana is legal) and people who use medication prescribed for someone else or who use it in a manner not authorized by their own prescriptions; and unauthorized U.S. residents, regardless of whether they have demonstrated any violent tendencies.

Even the American Civil Liberties Union, which maintains that the Second Amendment does not protect an individual right to arms, argues that "the categories of people that federal law currently prohibits from possessing or purchasing a gun are overbroad, not reasonably related to the state's interest in public safety, and raise significant equal protection and due process concerns." In this context, proposals to "enhance" or expand the current background check system (by adding more data or requiring background checks for private firearm transfers, for example) mean that more people will be unjustly stripped of their Second Amendment rights even though they pose no public safety threat. Nor are background checks a very effective way to stop mass shootings, since the perpetrators of such crimes (including last weekend's attacks in El Paso and Dayton) typically do not have disqualifying criminal or psychiatric records.

Red flag laws aim to identify people who pose a threat to themselves or others but are not already disqualified from gun ownership. Such laws allow judges to consider a wide range of evidence, including the psychiatric evaluations that Friedman dismisses as no more accurate than a roll of the dice. In Florida, for example, judges hearing petitions for gun confiscation orders "may consider any relevant evidence." That opens the door to literally anything a judge considers relevant, including unsubstantiated allegations, misconstrued conversations, and controversial or offensive social media posts. This permissive approach to evidence, combined with vague standards and the looming fear of denying an order in a case where the respondent ends up killing himself or someone else, helps explain why the approval rate for final "risk protection orders" in Florida is 95 percent.

There is no solid evidence that red flag laws, the oldest of which (Connecticut's) was enacted two decades ago, prevent homicides. But there are anecdotes. The New York Times describes the case of a San Diego car dealership employee who "told his co-workers that he would shoot up the place if he were fired" and who "praised the man who had carried out the Las Vegas massacre." There was also a man who "told his fiancée he wanted to shoot her in the head" and "threatened to kill her ex-boyfriend." Another man "told co-workers that he wished his supervisors would die, and that he could invite them hunting so it would look like an accident."

San Diego's city attorney, Mara Elliott, obtained gun confiscation orders against all three of those men under California's red flag law. It is hard to tell from the sketches in the Times article whether the men's threats (especially that last one) were in earnest, and it is impossible to say whether any of these men would have followed through on them. But it certainly makes sense to be concerned about people who own guns and have threatened to use them. "Of the first 100 restraining orders [Elliott] obtained," the Times says, "one in seven involved people who had threatened violence at a workplace or a school, and about 10 percent involved people who made threats on social media."

That accounts for less than a quarter of the orders. What about the rest? Based on the track record of red flag laws in Connecticut and Indiana (the first two states to enact such statutes), I'd guess most or all of them involved people who were deemed suicidal. Were they actually suicidal?

Even the most generous estimates, based on a method that may not be reliable, suggest that 90 to 95 percent of people who lose their Second Amendment rights under red flag laws because they are deemed a threat to themselves would not actually have committed suicide. Whether or not you think those odds are good enough to suspend someone's constitutional rights for a year or more (and whether or not you think the government should be in the business of stopping people from killing themselves), it is notable that red flag laws are sold as a way to prevent murder but are mainly used to prevent suicide.

When you combine the focus on suicide with the dubious evidence and vague standards for gun confiscation orders, it seems clear that the vast majority of people subject to these orders do not actually pose a threat to others. The other side of the coin is that red flag laws do not necessarily identify people who are in fact bent on violence. Connecticut's red flag law did not prevent the 2012 massacre at Sandy Hook Elementary School, even though the perpetrator was conspicuously troubled and had contact with the mental health system. It is unclear that even last year's attack at a high school in Parkland, Florida, which prompted the recent spate of red flag laws, would have been prevented by the availability of gun confiscation orders.

The red flags that in retrospect identified Nikolas Cruz as a future mass murderer were not so clear at the time, because they were not all visible to any single person or agency with the ability to act on them. Things might have been different if the FBI had followed up on a telephone tip it received a month before the attack from "a person close to Nikolas Cruz." The FBI said "the caller provided information about Cruz's gun ownership, desire to kill people, erratic behavior, and disturbing social media posts, as well as the potential of him conducting a school shooting."

The FBI said that information, which was received on the bureau's general tip line, "should have been forwarded to the FBI Miami Field Office, where appropriate investigative steps would have been taken." If that had happened, agents probably would have talked to the same people reporters interviewed after the shooting: Cruz's current and former neighbors, the couple who took him in after his mother died, his coworkers at a local Dollar Store, and staff and students at the high school.

Such an investigation would have drawn together the various strands of Cruz's story: his disturbing social media comments, his volatility, his cruelty to animals, his fights and disciplinary record at school, his weapons, and his troubles at home, where his mother repeatedly called the police for help in managing him. Such an investigation would have revealed Cruz as a potentially dangerous person to be watched, if not someone actively plotting mass murder.

But that did not happen. So the question is, given what people knew before the attack, who would have initiated the process of taking away Cruz's guns?

Even in this paradigmatic "red flag" case, in other words, it is doubtful that a red flag law would have made a difference. As the Times notes, red flag laws "depend on people to call the authorities about someone before they act," and "many mass shooters are never reported."

Another challenge, as the Times also notes, is that red flag orders expire unless there is reason to extend them, as they must if we are to retain any semblance of due process. So while the 24-year-old perpetrator of the Dayton attack "composed lists of people he wanted to kill or rape" when he was in high school, any order issued at the time would have expired by now. Ohio Gov. Mike DeWine is nevertheless pushing a red flag law in response to the Dayton shooting.

Advocates of red flag laws concede they are not a complete solution. But given the ratio of mass murderers stymied (possibly more than zero) to harmless people unfairly stripped of their constitutional rights (the vast majority of respondents), it seems like a pretty ham-handed approach.

The basic problem, as Friedman explains before ignoring it, is that "the notion that we can identify mass killers before they act is, as yet, an epidemiologic fiction." I wish that were not the case. I wish there were ways to accurately predict which very few of the country's many angry oddballs will one day commit mass murder. But wishing it does not make it so.