If a chaotic concert that nearly failed "defined a generation," what does that actually mean? 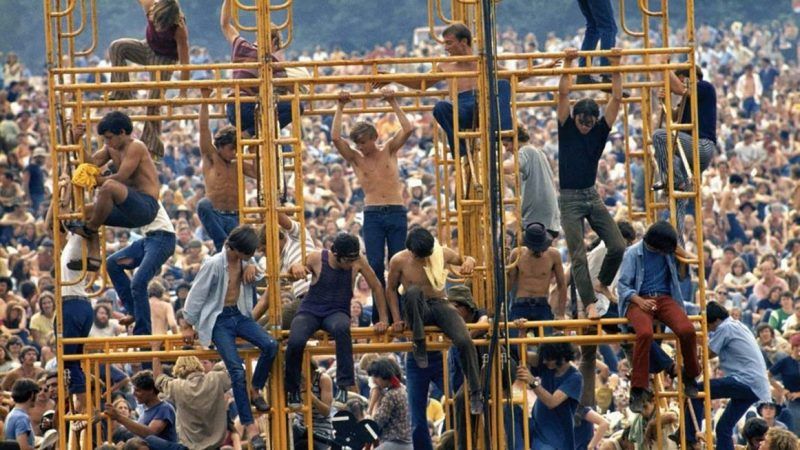 It's perfectly reasonable to wonder why anybody feels the need for another documentary about Woodstock. We've already got the film of the same name that was released in 1970, a staggering 224 minutes of dope, drizzle, and dishabille, which won an Oscar and is part of the Library of Congress' National Film Registry.

But there are a few reasons you might want to take a peek at PBS's new effort, Woodstock: Three Days That Defined a Generation. For instance, its revelation of the novel funding idea of Artie Kornfeld, one of 1969 rock festival's principal organizers.

Told that construction crews hadn't been able to get fences built in time and Woodstock would have to be declared a free concert, Kornfeld asked: "Can't we get a whole bunch of girls and put them in diaphanous gowns and give them collection baskets and send them out into the audience?"

Then there's the video of that bumper sticker posted on one of the food stands that dotted the perimeter of the concert ground: "DON'T WORRY BE HAPPY," a full 19 years before Bobby McFerrin's record drove a nation to homicidal madness.

Oh, and a reminder that rodents were rocking their own Age of Aquarius: A glimpse of the log kept at the medical tents remembered mostly for taking care of the consumers of Woodstock's infamous brown acid reveals they also had 11 patients suffering from rat bites. I blame Nixon.

To be fair, this Woodstock is very different than the film, which lacked interviews or narration and was more immersion than explication. Director Barak Goodman (Oklahoma City) conducted interviews with several of Woodstock's organizers that he uses to trace the festival's evolution from its conception as a recording studio for Bob Dylan to an outdoor concert for 5,000 people to (at least for a weekend) a city that was the 10th-biggest and most-stoned in America.

(Actually, I assume that Goodman's crew did the interviews, but that may not be true. Several of the interviewees, including Joe Cocker and Jefferson Airplane guitarist Paul Kantner, have been dead for years, and the film's credits don't reveal where their comments came from.)

The result is a story in equal parts amusing and appalling. The organizers spent weeks lurking around the bathrooms in Yankee Stadium and Madison Square Garden and timing the occupants to determine how many Porta Potties would be needed at Woodstock. Answer: "Tens of thousands … just impossible numbers." They went ahead anyway.

Pretty much the same degree of planning went into food, security, shelter and everything else about Woodstock. Even the power lines into the festival site—literally the life blood for all the guitars, amps, speakers and soundboards necessary for the show—were installed chaotically. During the apocalyptic rainstorm that struck on the second day, a 50,000-volt cable was unearthed, which—as one of the organizers admits—could easily have resulted in a mass electrocution. "Fortunately," he observes breezily, "that didn't happen."

It's narrow misses like that one that make the documentary's subtitle—"three days that defined a generation"—so arrogantly infuriating. Woodstock, it's true, did not live up to the famous New York Times headline, "Nightmare in the Catskills."

But that was mostly due to the eternal saviors of teenagers, Mommy and Daddy. The National Guard helicopters ferried in food (nearly all of it donated by the middle-aged townsfolk of nearby Bethel, N.Y., who were home watching Lawrence Welk instead of Jimi Hendrix) and carried out medical casualties. Without their help, and a generous amount of blind luck like the power line not zapping everyone, Woodstock might have more literally resembled what the crew that stayed behind two weeks after the festival to clean up compared it to: a Civil War battlefield.

The most notable thing about the PBS Woodstock is the contortionist specter of a generation blowing smoke up its own ass. The last 15 minutes or so are mostly devoted to people who attended Woodstock declaring it a utopically transformative event that changed everything. Really? Jimi Hendrix and Janis Joplin would be dead of drug overdoses within a year. The Vietnam War continued for another three. The next president elected was not George McGovern but Richard Nixon, and when Baby Boomers finally did start electing presidents, the result was Afghanistan and Iraq. And raise your hand if you think race relations are any better today than they were in 1969.

You could as easily make the argument that what defined a generation was not Woodstock but Altamont or the Manson Family. Baby Boomers didn't change the world at Woodstock, or create a New Man. Their only accomplishment was to stand up in public, half a million strong, and chant the word "Fuck!"without getting spanked. It's sad that, 50 years later, they still can't tell the difference.