Charles Oliver | From the August/September 2019 issue

In Johnson County, Kansas, a 5-year-old student hid inside a 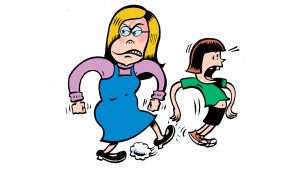 bookshelf in the Bluejacket-Flint Elementary School library. A teacher named Crystal Smith found the girl, angrily pulled her out, waited for another adult who was present to turn away, and, video footage shows, kicked the student in the back.

Former Iowa Department of Human Services social worker Chelsie Gray has been charged with three counts of felony perjury for giving false testimony while recommending to a judge that he remove four children from their mother and father and terminate the couple's parental rights. 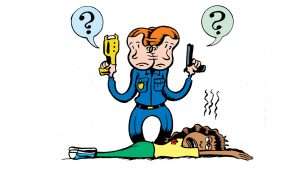 A Ladue, Missouri, police officer has been charged with second-degree assault for shooting an alleged shoplifter who was attempting to flee the scene. An attorney for Officer Julie Crews said she thought she was drawing a Taser, not her gun.

A new law in New South Wales, Australia, could force the Lithgow Small Arms Factory Museum to destroy or sell 70 percent of its collection. The law requires all pistols and many other types of firearms to be rendered permanently inoperable. That would require parts to be welded together or a steel rod to be inserted into the barrel of a gun and welded in place. Museum officials say that if they cannot get the law overturned, they will sell the collection overseas.

When Jesus Reyes and his family arrived at the pavilion at a Bexar County, Texas, park that they'd reserved for Easter Sunday, they found Precinct 2 Constable Michelle Barrientes Vela there, in uniform, claiming she had reserved the pavilion. After a park manager confirmed that she had not, Vela and her group moved to a nearby barbecue pit. She then insisted that Reyes pay her $300 for security, which he did.

A judge in British Columbia, Canada, has found Patrick Henry Grzelak guilty of violating the province's "hands free" driving law, even though Grzelak wasn't holding his phone. In fact, the phone was properly stored and had a dead battery. But Grzelak had his earbuds in, and they were plugged into the phone. Justice Brent Adair said that makes them part of the phone and that Grzelak was therefore in violation of the law. 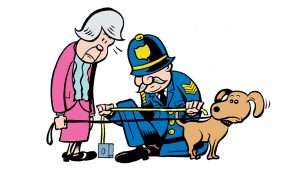 An 80-year-old woman in Bootle, England, was handed a 50-pound ($65) fine by code enforcement for walking her dog on a leash that was too long. The officers who cited her warned her the fine would increase to 2,500 pounds ($3,200) if she did not pay it within two weeks. After local media picked up the story, the local council dropped the charge.

Starting in January, the state of Washington will require booster seats for all children until they reach 4 feet, 9 inches in height 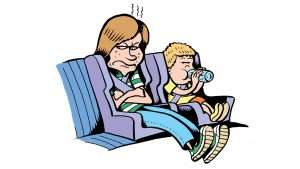 when they are traveling in vehicles. That will cover many kids until they are around age 12.

Officials with the Pearland, Texas, Independent School District say an administrator has been placed on leave for mishandling a disciplinary action. A student showed up at Berry Miller Junior High School with an M shaved into his hair, a violation of the school dress code. The administrator told the boy he had three options: call his mother, receive disciplinary action, or color it in. The boy ended up with the M colored in with a marker. School officials say that shouldn't have happened.

More than 3 million Californians may have to go back to the Department of Motor Vehicles to get new driver's licenses. The federal Department of Homeland Security sent a letter to Gov. Gavin Newsom telling him the new licenses do not comply with Real ID requirements because the state did not adequately verify the residences of applicants.