Most Democratic candidates are to the left not just of Americans but of their own party. 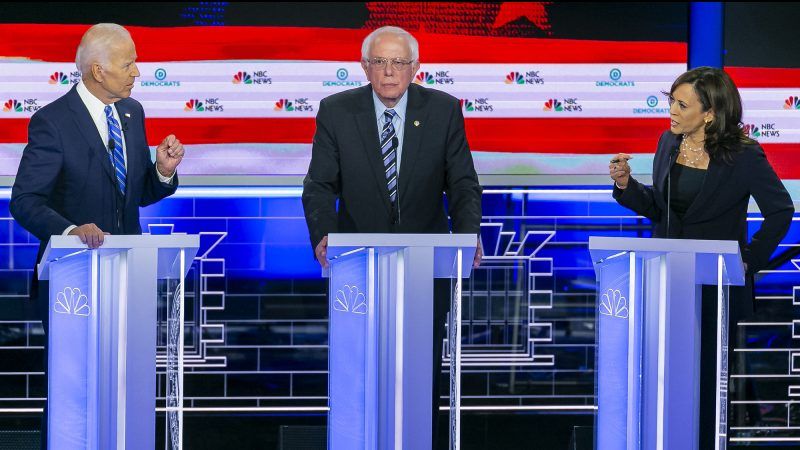 The only truly memorable moment from the first round of Democratic presidential debates came when Sen. Kamala Harris (D–Calif.) called out former Vice President Joe Biden for having objected to mandatory busing to desegregate schools back in the 1970s. She acknowledged a few days later that she actually agreed with Biden's underlying position: Biden didn't think the federal government should be dictating local school policy, which is also exactly Harris's stance. But in the moment, that didn't matter. Her seemingly heartfelt confrontation of the frontrunner—and his bumbling, doddering response—allowed her to vault into the the top tier of candidates.

As the second round of Democratic debates unfolds over tonight and tomorrow, expect more candidates, especially lower-polling ones, to pounce less on Donald Trump and more on their Democratic counterparts, especially Biden, who enjoys leads ranging from 13 points to 27 points in various polls of voters in early states. Especially over the past few weeks, Trump has delivered his critics an embarrassment of riches in the form of hostile, racist tweets directed at various Democratic members of Congress. But the serious contenders realize if they want to square off against the president, they must first win the Hunger Games that is their own party's nominating process.

Sanders and Warren are the most consistently left-wing major candidates running for the nomination. They support similar plans to grow the size, scope, and spending of the government, and they describe the U.S. economy as fundamentally unfair to all but the top 1 percent. That ideological overlap, along with the fact they both hail from the Northeast and need strong showings early in New Hampshire, suggest they will go at it tonight—all while bashing Biden, who appears tomorrow alongside his nemesis Harris. For formerly hot candidates such as Beto O'Rourke, tonight may be make-or-break time, as he tries to regain the momentum that landed him on the cover of Vanity Fair and drew taunts of "Skateboard Jesus." Buttigieg has raised a ton of money but remains stuck at around 6 percent. These sorts of candidates need to start making themselves more memorable.

The tension in this week's debates will not be limited to personal attacks. There's a deep disconnect between almost all of the candidates and actual rank-and-file Democrats. As the candidates lay out more and more liberal programs—Medicare for All, student debt forgiveness, free college for all, reparations for slavery and for gay couples who couldn't get married until a few years ago, health care for undocumented immigrants, a Green New Deal—Democratic voters are saying they want a more moderate party. Earlier this year, Pew Research found that 53 percent of Democratic and Democratic-leaning voters agreed that they "would like to see their party move in a more moderate direction." Just 40 percent wanted it to move in a more liberal direction. Late last year, when Gallup asked the same question, 54 percent wanted a more moderate party, compared to 41 percent calling for a leftward lurch (other analyses show that, for instance, a vast majority of Democrats are against getting rid of private health insurance while a number of top candidates are calling for single-payer). Former Obama apparatchik Paul Begala fears that the nominating process has become "some kind of purity game to see who can be the most leftist." He and others worry that they very thing that leads to success in the short run will make it harder for the Democratic nominee to win in a general election.

In the long run, that disconnect between the party's candidate and its voters will be more important to the 2020 election than any of the gotcha dramas that play out in tonight's and tomorrow's debates.