Under Venezuelan Socialism, There Is No Beer. (And No Democracy.)

Attempts to centrally plan an economy ruin both civic life and life's pleasures. 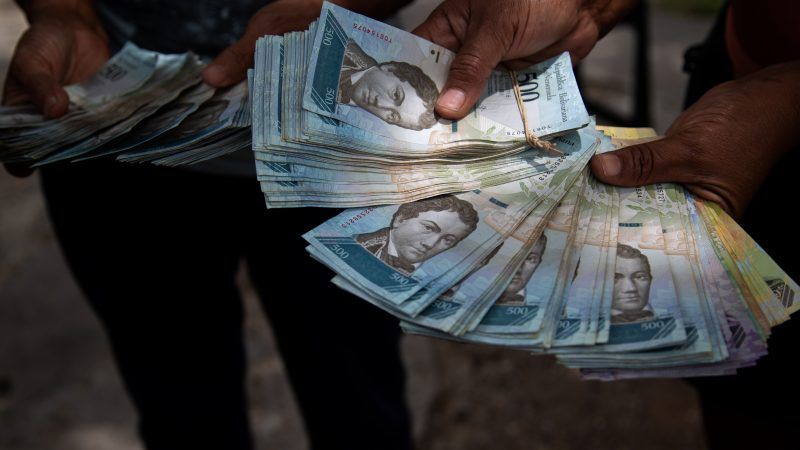 Venezuela's economic crisis began in earnest about five years ago, when the price of oil began falling from more than $100 a barrel, down to a low of about $26 a barrel in 2016. But the underlying cause of the crisis is the government's socialist economic policies, and the crisis has intensified as the government doubles down on those policies.

The economic crisis has, in turn, produced a political crisis. Widespread discontent with economic conditions prompted protests against President Nicolas Maduro's government. In January of this year, the National Assembly declared Juan Guiadó interim president, as allowed by the Venezuelan constitution. The United States and more than 50 other countries quickly recognized Guaidó as the legitimate head of state. But with the support of the military, Maduro has continued to cling to power.

Three years ago, the two of us traveled to the Venezuelan border to better understand the causes of the country's economic strife. We traveled to the bridges near Cúcuta, Colombia, where—unlike in Venezuela, just across the river—there were no government-enforced wholesaler monopolies, no arbitrary price controls, no limits on profits. What a difference a river and a border made: On the Colombia side, freer markets were providing what the Venezuelan government could not.

The stores in Colombia were well stocked. Three or four pharmacies near the bridge sold a wide variety of medicines and supplies. Bulk food was everywhere, and pallets heaped with bags of rice were constantly offloaded from trucks and into storefronts. Phone cards, cooking oil, diapers, pre-packaged snacks, juice drinks, and many other basic goods were all widely available. Roadside stands sold food and ice cream. According to Julian, a reporter traveling with us, prices were cheap, even by local standards. A pound of rice went for less than a dollar.

The only thing we couldn't find was beer. It was available for takeaway from stores, but we were looking for a place to sit and people-watch. Eventually, we found a small, dusty joint with a few beat-up plastic chairs and a beer cooler. It wasn't on one of the main shopping alleys, but it was the only option around. We grabbed a couple of Bahias, which cost about 33 cents each.

Not only were the beers cheap, but we counted ourselves fortunate because, to Venezuelans, beer had become a rare luxury. In Venezuela, six months earlier, there was no beer at all. That's right—they ran out of beer. Empresas Polar, which produces 70 to 80 percent of Venezuela's beer, had closed all four of its breweries the previous April when they ran out of malted barley.

The government prefers a different explanation: It says the problem is that Polar's CEO is a "thief and a traitor" who is trying to undermine the socialist regime.

As horrifying as a shortage of beer sounds, it's nowhere near the worst of Venezuela's problems. Venezuelans aren't just thirsty. They're hungry. Most of them don't have access to a market like the one we were at across the river. As a result, three-quarters of the country's adults lost an average of 19 pounds during 2016. Caritas, a Catholic humanitarian organization, found that among children under 5 years old, more than 11 percent suffered from moderate or severe malnutrition. The situation has only become worse since our visit. Venezuelans lost an average of 24 pounds in 2017. Venezuela's socialist policies are literally starving the country.

Two months after our visit, the Ministry of Health released statistics showing that infant mortality rates had shot up 30 percent in 2016. The minister who released the statistics was promptly fired. So much for Article 83 of Venezuela's constitution, which declares, "Health is a fundamental social right and the responsibility of the State, which shall guarantee it as part of the right to life." Apparently, writing down a "right" to something on a piece of paper doesn't magically make it materialize.

Many observers believed Maduro's predecessor, President Hugo Chávez, had created prosperity with socialist economic policies. What these observers missed was that high oil prices disguised how his policies were destroying the country's economy. Venezuelans were sitting on the world's largest known oil reserves, yet oil production was at a 23-year low. Nationalized oil companies hadn't maintained their pipelines and refineries, because they had no profit motive to do so.

Kevin Grier, an economist at Texas Tech, co-authored a study that compared the performance of Venezuela's economy during the oil boom against the economies of similar but non-socialist countries. He found that Venezuela's economy improved, but by less than that of the other countries; in fact, if Venezuela had not followed socialist policies, Venezuelan incomes would likely have been 20 to 30 percent higher. High oil prices hid the fact that Venezuela was falling behind its neighbors economically and merely keeping pace when it came to poverty and infant mortality. Once oil prices fell, the mask was off.

So with production cratering and oil revenues drying up, where is the Venezuelan government getting its money? That's easy: They're running a printing press, and you don't have to be an economist to know that results in inflation. Prices are rising faster and faster every year—the inflation rate was more than 30 percent in 2008, and more recently hit an estimated 18,000 percent in March and April 2018. It's almost impossible to measure inflation properly in a country with such massive shortages and controlled prices.

Hyperinflation is one of the most destructive things a government can do to an economy. It devastates the balance sheets of banks and other lenders, which causes borrowing and lending to grind to a halt. Virtually every house, factory, and business you've ever seen was created with borrowed funds, and failing banks mean no new houses, factories, or businesses. Inflation erodes savings, destroys people's ability to make long-term plans, and turns the entire economy into a race to spend money as fast as possible before it loses its value.

For much of 2017, Chávez's successor, President Nicolás Maduro, had an approval rating that hovered between 20 and 30 percent; anti-government protests abounded. But Maduro was reelected in 2018 amid, as The New York Times put it, "widespread disillusionment," with "more than half of voters not casting ballots" and critics alleging that the election was "heavily rigged."

This shouldn't surprise you. Political freedom cannot survive without a large degree of economic freedom. In his 1944 book The Road to Serfdom, Friedrich Hayek argued that a competitive capitalist economy is necessary to sustain democracy, and that once a country becomes "dominated by a collectivist creed, democracy will inevitably destroy itself."

Centrally planned economic systems necessarily concentrate economic power in the hands of government planners, who can punish dissent through their economic edicts. This is exactly what has happened in Venezuela, where state employees were fired for signing a petition demanding that Maduro be recalled. In 2017, Maduro ordered a special election for a Constituent Assembly that could rewrite the constitution and give him even greater power.

While the opposition called for an electoral boycott, the government again threatened state employees to support Maduro or be fired. According to Reuters, the vice president of the state-owned oil company, Petroleos de Venezuela SA, told his employees that any "manager, superintendent, and supervisor who tries to block the Constituent Assembly, who does not vote, or whose staff does not vote, must leave his job on Monday."

During the 2018 presidential election, the government banned the largest opposition parties, violently repressed anti-government protests, and moved the election forward seven months to hamper challengers. Many voters went directly from the voting booth to nearby "Red Spots," where the government checked their IDs and handed out food rations—essentially a bribe for voting.

Less than a decade ago, Venezuela was widely hailed as a successful example of democratic socialism. But its socialist policies are what made its economy collapse, and ultimately those policies made democracy collapse as well.

With our last cold(ish) beer behind us, we ventured back into the melee of shoppers and asked Julian if we could trade for some Venezuelan currency. We had only a few Colombian pesos and he wasn't sure if they'd take dollars. There were official-looking dealers in kiosks and dozens of unofficial dealers roaming the streets.

Bob walked up to one fellow with a $20 dollar bill in hand and mimed that he'd like to change it for bolívares. The guy handed over a 12-inch stack of 100-bolívar notes, the highest denomination in circulation at the time. Bob asked if he had any smaller notes, and he laughed, dug around in his bag, and threw in a couple bundles of 20s and 50s. "Gratis!" he laughed.

You'd need at least a five-foot stack of bolívares to buy something worth $100. Julian told us that they don't even count the bills for large transactions: They just weigh them. In fact, we had noticed some Venezuelans appeared to have heavy luggage coming into Colombia. It suddenly dawned on us that the incoming bags were filled with cash.

We thought about taking the nearly worthless stack of notes to a strip club in Cúcuta to "make it rain," but decided that pissing off Colombian strippers was not very prudent. In the end, we opted to do our small bit to fight Venezuelan inflation by taking the money out of circulation and bringing the stack of bills home as souvenirs.

As we walked toward the queue of yellow taxis waiting to take the richer Venezuelans, and us, to Cúcuta, Bob asked a passerby, "¿Por qué vienes aquí?" Why are you coming here?

He looked across the bridge he'd just crossed and muttered simply about the homeland he just walked out of, "No hay nada allí." There is nothing there.

Robert Lawson is the Fullinwider Chair in Economic Freedom at SMU Dallas. Benjamin Powell is the Executive Director of the Free Market Institute and Professor of Economics at Texas Tech University and Senior Fellow with the Independent Institute. This article is adapted from their new book Socialism Sucks: Two Economists Drink Their Way through the Unfree World (Regnery Publishing, 2019).

Benjamin Powell is the director of the Free Market Institute at Texas Tech University and a senior fellow at the Independent Institute.