The island's residents have had enough of a territorial government tainted by corruption and that is seemingly contemptuous of their daily struggles. 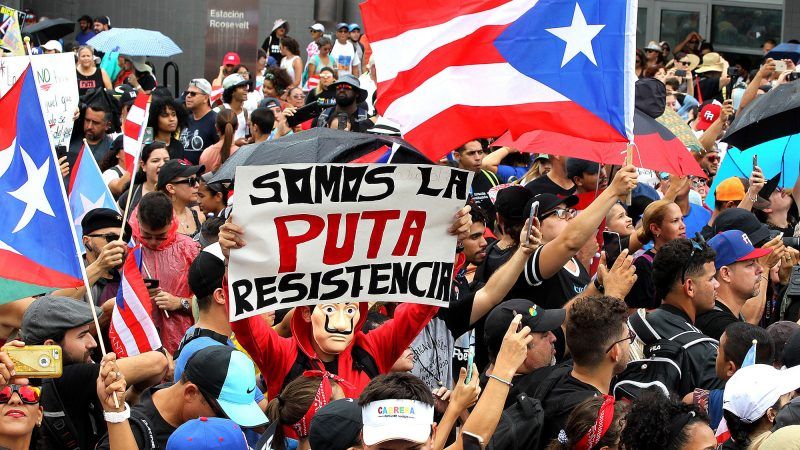 Embattled Puerto Rico Gov. Ricardo Rosselló said Wednesday evening that he will resign from office following days of demonstrations demanding his ouster over leaked offensive text messages between the governor and his staff.

"My only priority has been the transformation of our island and the wellbeing of our people," Rosselló said last night in a televised address, adding that he would step down by August 2. "The demands have been overwhelming and I've received them with the highest degree of humility."

The governor's resignation came two days after a massive march in San Juan—reportedly one of the largest in the island's history—which saw protestors filling the city's main freeway demanding that Rosselló step down.

Earlier in the month, local media published some 900 pages of group texts involving the governor and senior members of his administration in which they made misogynistic remarks about female politicians, mocked victims of recent hurricanes, and expressed disdain for a federal oversight board that's been set up to guide the island out of its severe debt and pension crisis.

The texts were the last straw for many residents of the U.S. commonwealth.

The messages were published in the press at the same time that the FBI was arresting other senior members of Rosselló's administration for giving government contracts to politically-connected firms.

In addition to government corruption, Puerto Ricans have had to endure the long-lasting effects of 2017's Hurricane Maria. The storm caused billions of dollars in damage and knocked out much of the island's mismanaged, debt-laden, government-owned electrical grid.

The island's economy has essentially been in recession since the mid-2000s and roughly 500,000 Puerto Ricans have left the island over the past decade, according to the Pew Research Center. Population loss and a shrinking private sector have only made it harder for Puerto Rico to cope with its government debt crisis. The island owes some $74 billion in debt and another $50 billion in pension obligations, according to a Wall Street Journal editorial.

That same Journal editorial notes that Rosselló has used his time in office to fight efforts at scaling back this debt, including his flat refusals to implement furloughs of government workers and cuts to public pensions ordered by a federal fiscal oversight board set up in 2016. Some of the governor's private texts featured rather undiplomatic statements and emojis directed at this oversight board.

Making things harder for the Puerto Rican economy is the Jones Act, a century-old piece of legislation that requires goods shipped between U.S. ports to be carried by U.S.-built, U.S.-flagged, U.S.-manned vessels. This requires companies sending goods between the U.S. mainland and the island to use a smaller number of more expensive, Jones Act-compliant ships.

A 2012 study from the New York Federal Reserve found that the cost of sending a shipping container from the East Coast of the U.S. to Puerto Rico are double what it would cost to send that same container to ports in nearby Jamaica and the Dominican Republic.

However, liberalizing the Puerto Rican economy and paring back its public sector is not a particularly populist cause. The Los Angeles Times reports that Monday's protestors directed their anger at both the governor as well as the federal oversight board and its unpopular spending cuts.