Video of Rep. Ilhan Omar Allegedly Calling for People to 'Be More Fearful of White Men' Is Fake News

The viral clip was misleadingly edited, and stripped of important context 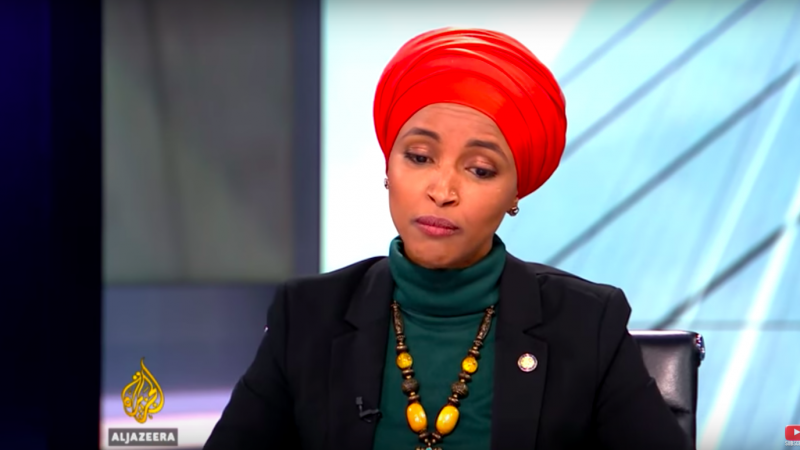 A short video clip in which Rep. Ilhan Omar (D–Minn.) appears to call on Americans to "be more fearful of white men" went viral this week, prompting denunciation from Sen. Marco Rubio (R–Fla.), who wondered whether journalists will ask Democrats to criticize Omar's statement as racist.

The 41-second clip, though, is extremely misleading, and specifically cuts out an important clarifying line.

Omar was asked by Al Jazeera to respond to the conservative argument that it is legitimate to fear "quote-unquote Jihadist terrorism, whether it's Fort Hood, or San Bernardino, or the recent truck attack in New York."

Omar's truncated response, featured in the viral video clip, seems to suggest that she thinks the government should instead be profiling white men. "I would say our country should be more fearful of white men across our country because they are actually causing most of the deaths within this country." The clip then immediately cuts to Omar saying, "We should be profiling, monitoring, and creating policies to fight the radicalization of white men."

If that were actually the point Omar was trying to get across, or even all she said, it would certainly be an idea worth criticizing.

But this is not what she's saying. As the full video makes clear, Omar included a caveat: After she says the line about why the U.S. should be more fearful of white men, she adds, "and so if fear was the driving force of policies to keep America safe, Americans safe inside of this country…" and then she says "we should be profiling, monitoring, and creating policies to fight the radicalization of white men."

Just to be abundantly clear, here is her full, unedited comment, in response to the prompt, "A lot of conservatives, in particular, would say the rise of Islamophobia is a result not of hate, but of fear":

Omar was not endorsing the creation of a state apparatus to surveil white people, but rather, suggesting that if we're going to base our decisions about public safety and surveillance on which racial or ethnic or ideological group causes the most violence, it is hypocritical for conservatives to focus on Muslims and not whites.

In fact, white men who identify as, or associate with, white nationalists have in recent years been responsible for more violent acts than radical Muslims, even though crimes committed by the latter group are far more likely to be labeled terrorism. This point came up frequently when I testified before the House subcommittee on civil rights and civil liberties last May, and it has been a topic of concern among American leftists for years. Ideologically-motivated violence is a small proportion of overall violence, of course. In 2017, there were just 34 "extremism-related" deaths in the U.S., according to the Anti-Defamation League. Eighteen were committed by white nationalists, and nine were committed by Islamic radicals.

According to The Intercept, which racial group causes the most violence in general depends on how you count and categorize acts of violence (and on 9/11 being excluded):

Some studies by academics, think tanks, civil rights groups, and news organizations have suggested that right-wing terrorism poses the greater threat. A 2017 report from the U.S. Government Accountability Office on terrorist violence from September 12, 2001 through December 31, 2016 found that while slightly more people have been killed by Muslim extremists than by their right-wing counterparts, right-wing extremists were responsible for three times as many violent acts. Research by the Anti-Defamation League on 573 "extremist-related fatalities" from 2002 to 2018 found that 80 percent of the victims were killed by right-wing extremists.

In any case, it's true that a myopic focus on Islamic violence neglects the rising threat of white nationalism. Neither threat should prompt Americans to willingly sacrifice their civil liberties or accept mass surveillance based on skin color or religious identification, but Omar was calling out hypocrisy and is well within her rights to do so.