Democrat Rep. Al Green Moves To Impeach Trump for his Attacks on 'The Squad'

Plus: Planned Parenthood's CEO is terminated, the Trump administration drains the swap, and Chelsea Manning is hit with more fines. 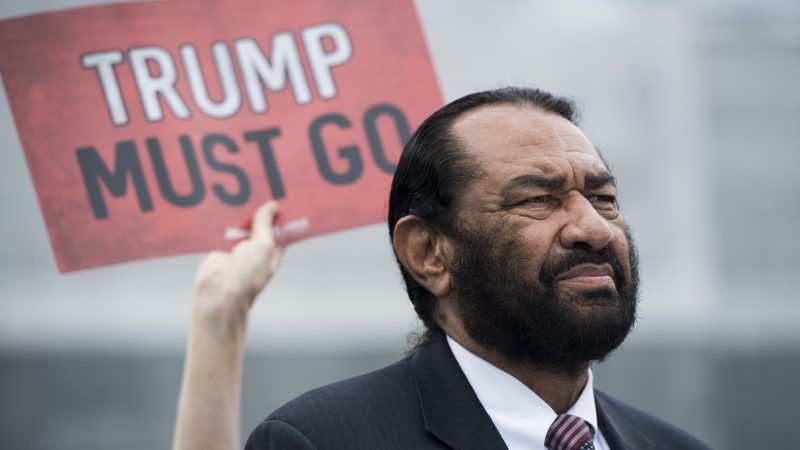 Moments before Green introduced his impeachment resolution, the House had voted to condemn the president's verbal attacks on the congresswomen, in which he called them "anti-Israel, anti-USA, pro-terrorist" and urging them to "go back" to their home countries. (All but Omar were born in America.)

That resolution did not go far enough for Green, who said that Trump's remarks amounted to a high misdemeanor worthy of impeachment. Trump "by causing such harm to the society of the United States is unfit to be president, and warrants impeachment, trial, and removal from office," said Green in a floor speech.

This is the Texas representative's third time trying to impeach Trump, having forced unsuccessful impeachment votes in 2017 and 2018. However, this is Green's first try at impeaching the president with a majority-Democrat House.

This puts Speaker of the House Nancy Pelosi (D–Calif.), an impeachment critic, in the tough position of having to decide whether or not to squash Green's resolution.

Under House rules, Pelosi has two days to decide whether to table Green's impeachment resolution (effectively killing it), send it to the House Judiciary Committee where it could linger indefinitely, or bring it up for a vote on the House floor. So far, she isn't indicating which option she'll pick.

"That will be up to our leadership team to decide," Pelosi told CNN Tuesday. "We haven't really discussed how to dispose of it," said Majority Leader Steny Hoyer (D–Md.) to reporters. "I'm not gonna try to discourage [Green], you know, he has to do what he thinks is right."

Any actual vote would likely fail, as only 86 House members have said they'd support impeaching Trump. What a vote on Green's resolution would do is force a lot of Democrats to go on the record about their support or opposition to impeachment—something many have been reluctant to do.

Even if an impeachment vote were to succeed in the House, it would be dead on arrival in the Republican-controlled Senate.

There are some good reasons one might have for impeaching Trump. That he's made nasty remarks about a few congresswomen doesn't seem to be one of them.

Dr. Leana Wen, Planned Parenthood's president and CEO, announced that she would be resigning her position with the organization, citing philosophical differences with the group's board of directors. "I believe that the best way to protect abortion care is to be clear that it is not a political issue but a health care one," said Wen in a Tuesday evening statement. "We can expand support for reproductive rights by finding common ground with the vast majority of Americans who understand reproductive health care as the fundamental health care that it is."

My statement stepping down as President/CEO of @PPFA and President of @PPAct. pic.twitter.com/WJ3EBgJIAy

The New York Times reports that there had been a lot of staff turnover at the upper levels of Planned Parenthood during Wen's eight-month tenure, suggesting organizational disarray as a reason for her ouster.

I obviously have no particular insight into the case of Dr. Wen, but my general observation of covering other organizations is that firing a chief executive after 9 months is often a symptom of much deeper organizational dysfunction.

According to Buzzfeed, Wen's refusal to move the group in a more political direction, and to use "trans-inclusive" language, earned her enemies.

UPDATE: Two sources told us that Wen also refused to use "trans-inclusive" language, for example saying "people" instead of "women," telling staff that she believed talking about transgender issues would "isolate people in the Midwest." https://t.co/Db2ooboz4o

The Trump administration is planning on draining the swamp just a little bit by relocating federal employees from Washington to real America. On Tuesday, the White House informed Congress that it would be relocating 84 percent of the Bureau of Land Management's (BLM) headquarters staff—260 people—out of D.C.

The BLM is responsible for managing federally owned lands, most of which are located out west. The bulk of BLM bureaucrats would be sent to Grand Junction, Colorado. The rest would be spread across other western states, including Arizona, Idaho, Nevada, and Utah.

Nearly half of the BLM's leadership is located in D.C. "despite the fact that their functions and operations are overwhelmingly carried out in the West," said Interior Department official Joseph Balash in a letter to Congress explaining the decision.

The planned move, which is slated to be completed by 2020, would allow BLM to provide better customer service while saving money on travel and leasing office space, Balash wrote. The White House estimates the move will save $50 million over 20 years.

Instead of moving them west, a more libertarian solution would probably be to fire more BLM workers. But if we can't get a smaller federal government, a cheaper, more spread out one is still preferable.