Humans Are Building Better Versions of Themselves

From insulin to prosthetics, technology makes this the best moment yet to be living with a disability.

Mike Riggs | From the August/September 2019 issue 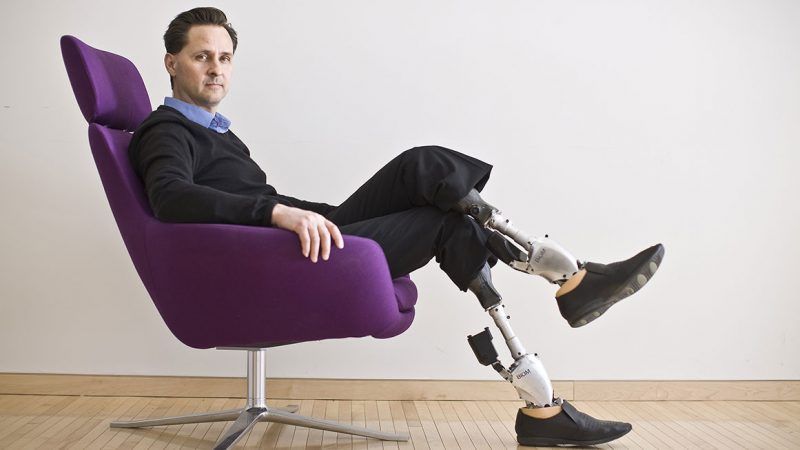 When my wife was diagnosed with Type 1 diabetes in the late 1990s, at the age of 9, the technology available for giving her body insulin, which her pancreas is supposed to make but can't, was relatively primitive: Mollie measured her blood sugar with a device the size of a TV remote. It took a full minute to process the blood sample she provided, which could be obtained only by pricking her finger once for every reading. Administering the insulin required a syringe, a vial, and the assistance of an adult. The hardest part of jabbing herself throughout the day, she says now, was learning to ignore the child's natural instinct to avoid pain.

It was also frighteningly easy back then to take too much insulin. When she was in middle school, my father-in-law found Mollie unconscious from hypoglycemia, a condition that can cause brain death and cardiac arrest. Her first year after college, she ended up in the E.R. again, this time because she hadn't taken enough insulin.

It could've been worse: Until the mid–20th century, Type 1 diabetics seldom survived adolescence.

Today, managing diabetes is a radically different experience. Mollie now uses a microscopic wire inserted under her skin to get real-time glucose updates on her phone (and mine) every five minutes. The sensor she wears is waterproof and roughly the size of a bottle cap, which means she can leave it attached to her arm for days at a time.

More miraculous still is the insulin pump that has replaced her pre-loaded insulin pins, which themselves replaced her hypodermic needles and vials just a few years ago. The pump communicates with her glucose monitor, shutting off if her blood sugar drops too low and alerting her if it appears she needs to increase her insulin rate. The pump is roughly the size of a deck of cards and connects to a port on her abdomen via a small tube. Sometimes that tube catches on things, but it's a massive improvement over jabbing herself with a needle dozens of times a day. A new tubeless pump is already on the market.

As with most people who have a disability, my wife wishes she didn't. But she also says there's no better time to be diabetic than right now.

Other realms of assistive technology have seen similar advances. Massachusetts Institute of Technology biophysicist Hugh Herr, himself a double amputee, designed bionic legs that made it possible for Adrianne Haslet-Davis, who lost her left leg below the knee at the Boston Marathon bombings, to resume ballroom dancing. Herr's latest breakthrough is the Ewing Amputation, a surgical procedure he co-developed that preserves the nerve and muscle connections necessary for the brain to control a robotic prosthesis as if it were a flesh-and-blood limb. Cochlear implants are restoring hearing to an ever-larger subset of deaf people. And a system developed at Duke using both a virtual reality headset and a robotic exoskeleton is helping paraplegics walk again.

Some diabetics now have access to a smart pump that can completely manage their insulin levels based on glucose readings, both cutting the insulin off and administering more when the user appears to need it. Mollie and I are excited about that technology and eager for the price to fall as more governments approve its use.

Many of these technologies are nascent and experimental. They won't be available tomorrow, and they likely won't be truly affordable for years. But the advances aren't just happening at the bleeding edge. Ryan Hines, who was born with arthrogryposis and has very limited use of his arms, used a computer-aided design program to make a specially balanced spoon and fulcrum that allows him to feed himself without his hands or—most importantly—assistance from a caretaker. While a more advanced device is available starting at $8,000, Hines' 3D-printed Bear Paw sells for just $150.