Pearson Flops as a Sequel to USA's Wild Suits

How can a show about Chicago's squalid corruption have so little to actually say? 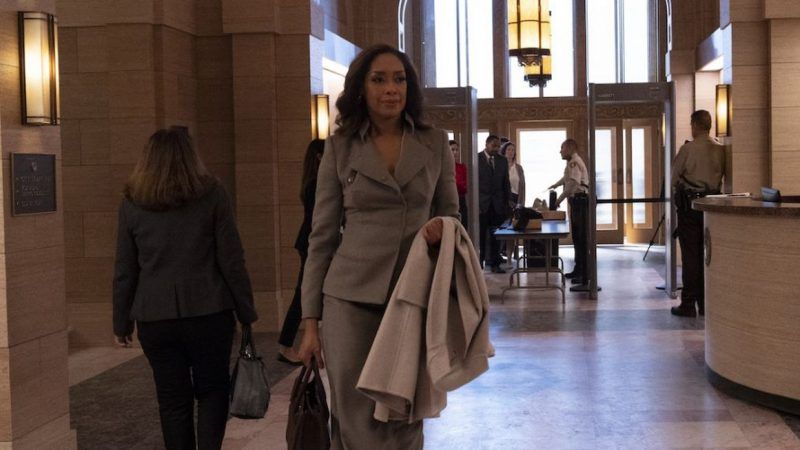 In 2011, the USA Network introduced a truly preposterous legal comedy-drama called Suits, in which one of the name partners at a powerhouse Manhattan law firm makes an exception to its older-than-God employment policy of hiring only Harvard Law grads.

The precedent-smashing candidate not only didn't go to Harvard, he didn't go to law school at all, and he literally stumbled into the job interview while fleeing a police bust of one of his dope deliveries. Aside from the weed biz, the only entry on his resume was for fraudulently taking bar exams for nitwits, which he always passed because of his photographic memory.

Most of the next six seasons or so consisted of everybody at the firm running around trying to keep the outside world from finding out one of their fellow lawyers was a fake. This was surprisingly entertaining—I've met a lot of attorneys who confided that Suits was their second-favorite guilty pleasure after billing clients for on-line backgammon games. But eventually the premise wore itself out and in recent years, Suits has been mostly known as the place where Meghan Markle worked before she turned into a lumpen proletariat mole in the British royal family.

Never one to forget a (even temporarily) winning formula, USA is spinning off a Suits sequel, Pearson, based on an even more ludicrous proposition: The mayor of Chicago, on the verge of losing a poverty-pimp lawsuit over a public-housing development that could expose his shady financial machinations, gets the opposing attorney disbarred, then hires her as his No. 2 aide.

The person she has to work most closely with is the very city attorney who led the legal fight to revoke her law license, and whom she angrily (and, as it turns out, correctly) accused of sleeping with the mayor. If you're thinking this is a thought problem from a Human Rights Regulations on the Ninth Circle of Hell handbook, we must have similar bookshelves.

The disbarred attorney at the heart of this massive goat-fornicative scenario is Jessica Pearson (Gina Torres), the former head of the big New York law firm in Suits. Having lost that firm—though not, apparently the income that supported her haute couture wardrobe—through her inability to manage its intricate and savage politics, she's decided to take on the simpler task of managing the city that produced Richard Daley, Al Capone, and Rod Blagojevich.

Her new boss, Mayor Bobby Novak (Morgan Spector, Homeland), seems to fit right into the job's slimeball traditions—dirty money, scummy pals, using the police for after-hours hardball—but Pearson sniffs "Pshaw!" to friends and family concerned about her new job: "All politicians are professional liars." Yet not two minutes later, she proclaims herself on a moral crusade: "I spent years doing nothing but making money and trying to keep my name up on a [law firm] wall. I'd like this to be about more."

There you see the real danger confronting Ms. Pearson: not endemic corruption or grinding poverty or police brutality, but serial-killer hackery on her writing staff, which can't remember what it's had coming out of its characters' mouths from one scene to the next.

In Suits, Pearson was largely a supporting character whose main job was to keep her weird, temperamental staff of attorneys from killing one another. In this show, however, her responsibilities have increased. She has to sell a badly written character, juggle a hellish number of barely comprehensible storylines, and—unlike in Suits—do it all without cracking a smile. The weird obsessions that made Suits wildly more entertaining than your standard legal drama—with mud baths, incontinence, and pronunciation of the word "sheee-it"—have all disappeared.

Instead, there's an endless parade of political soap opera. Pearson's boyfriend, disgusted by her job, takes on a long out-of-town project. The mayor is extramaritally conferring with his cute-as-a-button city attorney (Bethany Joy Lenz, Colony), and not about tax millage. And the mayor's illegitimate brother with the patronage job at the police department—is he spying on the cops for the mayor, or on the mayor for the cops?

If Pearson gets anything right, it's the mind-numbingly redistributive nature of big-city government, where literally every minute of every day is spent slicing and re-slicing the revenue pie in hope of the momentary pacification of one shrieking pressure group or another. The public schools, the police union, the housing activists, they all want theirs, and not one moment is spent evaluating their demands on public money except in terms of how much hell they can potentially raise.

But Pearson—neither the show nor the character—makes no attempt to analyze or comprehend its squalid environment beyond the occasional sloganeering like "Closing schools is a hate crime." Pearson simply proclaims herself right and rolls along, too good to be true, and too sanctimoniously arrogant to be fun.

If we had to have a drama about Chicago politics, why couldn't it have been a reality show set in the office of velvet-voiced Jerry Butler, who retired from the city commission last year after 32 years in office? He may not have done much about the murder rate, but when he sang, who cared?