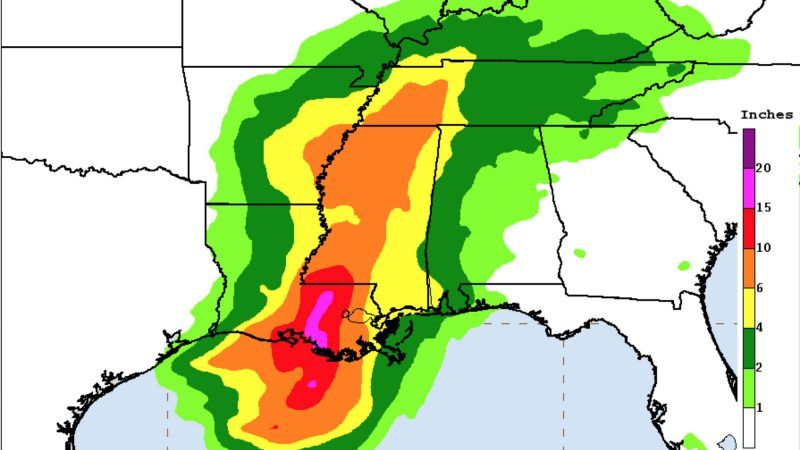 Up to 25 inches expected (NHC)

Tropical Storm Barry is expected to make landfall in Louisiana later today. The National Hurricane Center (NHC) projects that the slow-moving storm could drop up to 25 inches of rain on Baton Rouge and 15 inches on New Orleans.

For comparison, since 1898 only four downpours in New Orleans have exceeded one-day totals of more than 10 inches. Yearly rainfall totals for New Orleans and Baton Rouge average just a bit over 60 inches in each city.

Consider also that over 16 inches of rain fell on Houston on August 27, 2017. Records going back to 1921 show that Houston had never before experienced such a double-digit daily rainfall total. That was during Hurricane Harvey, which dropped more than 60 inches of rain while it dawdled over the Houston area for several days. That was the greatest amount ever recorded in the continental U.S. from a single storm.

It is now customary for reporting on big weather events to include speculation on how man-made climate change may be affecting them. In its story about Barry's impending landfall, The New York Times quotes Lawrence Berkeley National Laboratory researcher Christina Patricola: "Regardless of the methodology that you use, we're starting to see more and more evidence that climate change so far has been enhancing the rainfall on some of these recent hurricane events."

Patricola is co-author of a 2018 Nature study that applied climate models to observational data to calculate how much warming added to the precipitation in a suite of recent hurricanes. Among other things, that study found evidence that warming boosted rainfall amounts in Gulf Coast hurricanes Katrina, Irma, and Maria by 6 to 9 percent. Another 2018 Nature study found that since 1949 tropical cyclones have slowed down by about 10 percent; it suggested that human-caused climate change might be contributing to the change. Slower hurricanes tend to dump more rain on the areas over which they linger. However, other researchers think the alleged slow-down may be an artifact deriving from changes in the way cyclones have been detected over time.

Interestingly, another 2018 article, this one in the Bulletin of the American Meteorological Association, found that "since 1900 neither observed [continental United States] landfalling hurricane frequency nor intensity shows significant trends." Hurricanes hitting the U.S. may be getting wetter and slower, but their winds are not stronger and they are not more frequent. That said, in May the World Meteorological Organization comprehensively reviewed the scientific literature and concluded that "it is likely that greenhouse warming will cause hurricanes in the coming century to be more intense globally and have higher rainfall rates than present-day hurricanes."

Meanwhile, a 2018 article in Nature Sustainability reports that normalized losses due to hurricanes remain basically flat. The researchers "normalize" the losses by attempting to estimate direct economic losses from a historical storm as if that same event were to occur under contemporary social conditions. The upshot we're losing more buildings and infrastructure, but only because there is much more property to be destroyed along the Atlantic and Gulf coasts than there used to be. Once you adjust for that, the proportion of assets damaged by hurricanes even possibly amplified by climate change is not increasing.

Whatever the effect of climate change may have on Barry's destructive potential, let's hope that the people in the storm's path stay safe.