Her brand of feminism has little appeal beyond a narrow band of white professional women. 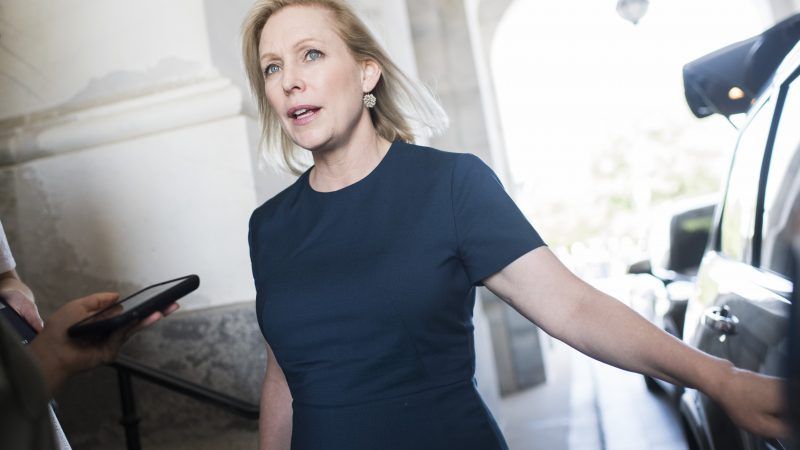 The polls show that New York Sen. Kirsten Gillibrand's bid for the Democratic presidential nomination is going nowhere fast. She received absolutely no bump from her lively performance after the last debate. Her support is stubbornly stuck at around 1 percent.

She is an attractive and well-spoken candidate who had generated high expectations. Why is she flailing? Essentially because she is selling a brand of feminism with little resonance beyond Facebook CEO Sheryl Sandberg's white professional female devotees, especially when the country is preoccupied with so many other pressing issues.

Gillibrand declared in her closing statement at the debate that this is "not the time" for Americans "to be afraid of firsts" because they "need a president who will take on challenges, even if she stands alone." If this sounds like she is making her gender a resume item, that's because she is.

She wasn't always this way. In an earlier incarnation, she was a career lawyer who represented Phillip Morris, the tobacco giant, for what liberals consider crimes against humanity. Yet, interestingly, she failed to target Big Tobacco when she attacked insurance companies, drug manufacturers, and the National Rifle Association (NRA) for "corporate greed" during the debate. She was pro-gun and anti-immigration which is why she handily defeated her Republican rivals in an upstate New York congressional district where few thought a Democrat could ever win. She was also part of the Blue Dog Democrats House coalition that voted against President Obama's financial bailout because it was fiscally irresponsible.

Her metamorphosis into a dyed-in-the-wool liberal began—surprise! surprise!—when she got appointed to Hillary Clinton's Senate seat after Clinton left to become President Obama's secretary of state. Since then, there is hardly a position that Gillibrand has not renounced. She is now anti-gun and pro-immigration and believes in public funding of campaigns and every other liberal position down the line.

But she still managed to catapult herself into the limelight as a woman of principle when, at the height of the #MeToo movement, she led the charge for the resignation of her Senate colleague, Al Franken of Minnesota, after several women accused him of sexual misconduct. She also broke ranks with other Democrats and declared that President Bill Clinton should have resigned over his affair with Monica Lewinsky.

It's not clear whether she did all this with an eye toward a presidential run. But she clearly thought that she could use her actions to turn herself into a feminist hero who would ride the wave of female disgust against President Trump's misogyny all the way to the White House, especially since none of her Democratic rivals have made women's issues part of their central pitch to voters.

But that is turning out to be an epic blunder.

According to a Hill-HarrisX poll this week, Gillibrand is the first choice of only 1 percent of Democratic women. Lest one chalk this up to her lack of name recognition, consider that Pete Buttigieg, the mayor of a tiny city like South Bend, a veritable unknown, is the top choice of 6 percent of Democratic women. How does Gillibrand stack up against her female presidential rivals? Not well. About 11 percent list Elizabeth Warren as their first choice and 8 percent Kamala Harris (although, interestingly, Harris, unlike Warren, draws more support from men than women).

Why are other candidates making more headway with Democratic women than Gillibrand? Because, regardless of what one thinks of their narratives, they are at least painting on a large canvas: Buttigieg is a millennial "synthesist" drawing his platform from both the conservative (fiscal responsibility, opposition to freebies like free college) and liberal (minority rights, social justice) camps; Biden is a pragmatic centrist who stands squarely in the middle when both sides are veering off their respective extremist cliffs; Sanders is the radical democratic socialist who wants to turn America into Denmark (or Venezuela if you listen to his critics); Warren is a fierce opponent of crony capitalism who is striving to create a level-playing field for the little guy; and Harris is (disingenuously) trying to re-invent herself as a social justice crusader who wants criminal justice reform and equal rights for persecuted minorities.

What are Gillibrand's big issues? Defending abortion rights, to be sure. This is a genuine vote mobilizer—except that many women mobilize in the other direction. She also proposes a "family bill of rights" that would offer national paid leave, universal pre-K, and affordable daycare. But many of these items are implicit in the broader agenda of the other candidates; Sanders-style socialism would certainly cover them. Gillibrand also wants to eliminate the wage gap and end workplace harassment and discrimination. But who does this affect most? White professional women like herself on a career path. There is not much in Gillibrand's platform for women with different profiles—a single black mom whose partner is serving an inordinately long prison sentence for petty drug violations or a self-employed Latina who is forced to spend 5,000 hours in a classroom to learn hair-braiding before she can obtain a license to open a salon. And what about men? Who needs men!

Gillibrand got pilloried for her tweet last year when she haikued: "Our future is: Female… Intersectional—Powered by our belief in one another. And we're just getting started." Quite apart from its sophomoric earnestness, what is striking about the tweet is its cluelessness.

Intersectionality, properly understood, is the notion that when people who occupy positions of power and privilege identify a social justice agenda, they inevitably tip it toward their own concerns rather than those of the truly persecuted or oppressed. The real problems of the truly marginalized inevitably get co-opted by the marginal problems of the relatively privileged. By her bubble-brained use of the term, Gillibrand turned herself into the poster child for the very problem that intersectionality raises.

Trump's populism has fundamentally shaken up the political landscape. He is smashing liberal institutions, trashing norms of executive accountability, openly promoting a blood-and-soil nationalism of the kind that the country has not witnessed in over 150 years, fueling fear and hysteria toward vulnerable minorities, transforming America's posture toward the world and much more. Gillibrand's Democratic rivals have correctly sensed that Trump can't be countered—nor can the possibilities his iconoclasm is opening be captured—without a grand narrative and a grand agenda. This is not the time to picayunishly focus on a narrow interest group. But Gillibrand drank so much Kool-Aid at the Women's March that she's fighting to eliminate the barely existent gender wage gap with the energy and enthusiasm of suffragettes fighting for the right to vote.

This is just plain tinny. It is hard to see how her Ann Taylor feminism can capture the imagination of women outside her be-pearled sisters—let alone the general public—with this kind of messaging.