The Census fight overlooks the fact that the number of unauthorized residents is declining.

The Trump administration will reportedly try yet again to add a question about respondents' legal status to the 2020 Census. The Supreme Court previously nixed the question because the rationale articulated by Commerce Secretary Wilbur Ross, who oversees that decennial head count, was clearly false. The judicial branch has the right to review administrative-agency rulings under the Administrative Procedure Act and, as Jacob Sullum has written, if Ross had been less full of beans, the Court would have likely signed off on the question since the secretary "has broad discretion to determine census questions."

Ross claimed several times in congressional testimony that he included the question after the Department of Justice prodded him to do so. Internal communications prove it was in fact Ross initiated its inclusion. Furthermore, he claimed that adding a question about legal status would lead to "more effective enforcement" of the Voting Rights Act, a law held mostly in contempt by the Republicans pushing the legal-status question. Indeed, it seems unquestionable that the goal of adding the question is to suppress participation by non-citizens even though, as Matt Welch has pointed out, the main function of the Census has been to figure out how to reapportion House seats. "According to both the Constitution and all active Supreme Court precedent on the issue," Welch writes, "House reapportionment is based on the number of residents, not number of legal residents or eligible voters."

That basic reality frightens Republicans such as Ford O'Connell, who served as director of rural outreach for John McCain in the 2008 presidential election. The headline to a recent O'Connell screed says, "If you don't think illegal immigrants are voting for president, think again." The actual article admits to something different:

No, illegal immigrants aren't allowed to directly vote for the commander-in-chief yet, but in vast numbers they can dramatically alter the Electoral College to favor Democrats for at least a decade because a state's electoral votes are based on the number of people residing within that state, not the number of citizens present when the Decennial Census is taken. 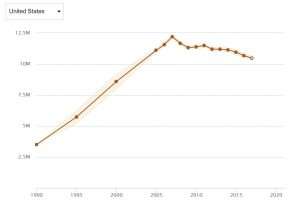 If that's the big fear, Republicans should take a couple of deep breaths. The number of illegal immigrants has been declining, and it is at its lowest point in about a dozen years. According to Pew Research, "In 2017, an estimated 10.5 million unauthorized immigrants lived in the United States, down from a peak of 12.2 million in 2007." Other data from Pew document that about 60 percent of undocumented immigrants live in one of 20 major metro areas, almost all of which have seen sharp declines in the illegal population's numbers: 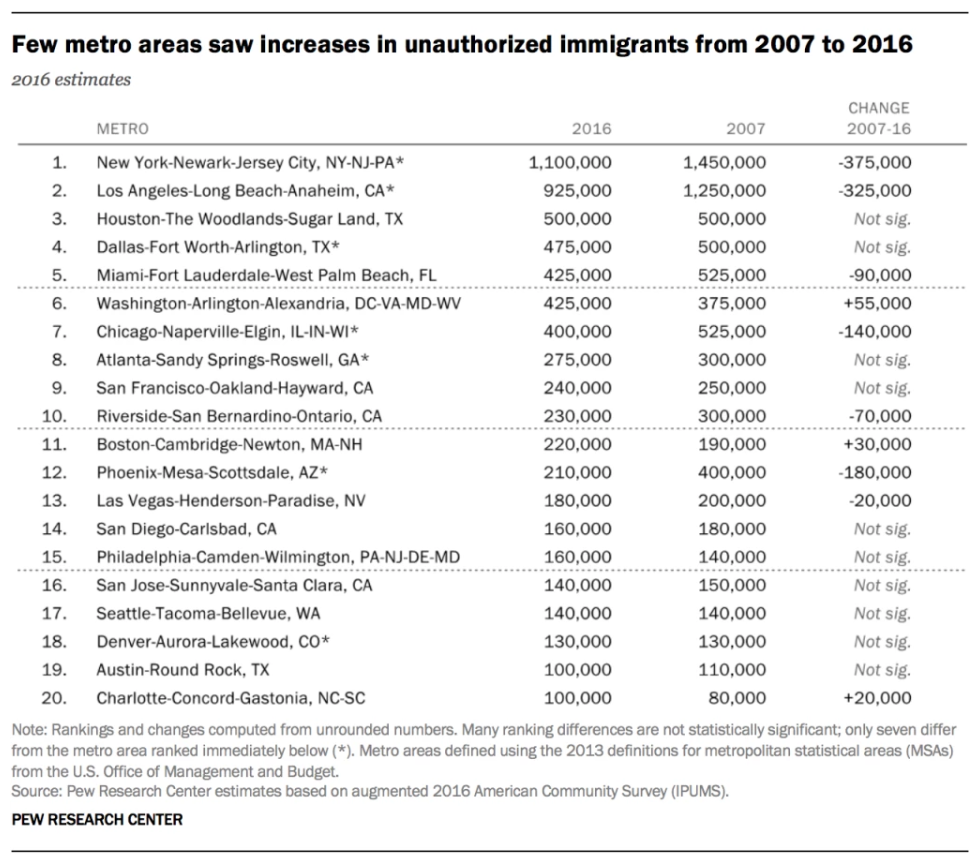 These trends are unlikely to be affected by recent upsurges in migrants showing up at the border between Mexico and the United States, as the numbers aren't big enough to alter the national picture. However the legal drama plays out over the next few weeks, the number of people here illegally seems likely to keep declining.