Short-term holding tanks marked by poor food and unsanitary conditions as immigrants are imprisoned for weeks longer than they should be.

No showers for a month. No food but bologna sandwiches. Eighty-eight men crammed in a cell with a maximum capacity of 41. At several immigration detention and processing sites in the Rio Grande Valley of Texas, people are being held in dangerous, overcrowded, unsanitary conditions for far longer than the intended 72-hour limit.

New information—and some devastating photos—about America's poor handling of immigrants crossing the southern border comes not from activists or politicians but from the Department of Homeland Security Office of the Inspector General (OIG). A report publicly released Tuesday details a nightmare scenario for immigrants who are caught attempting to enter the U.S. through Texas. The report is bluntly titled "Management Alert—DHS Needs to Address Dangerous Overcrowding and Prolonged Detention of Children and Adults in the Rio Grande Valley."

The Rio Grande Valley sector of the Border Patrol more than doubled its number of immigrant apprehensions from October of 2018 to May 2019; there's been a 269 percent increase in the number of families apprehended by Border Patrol during that span. Note that these apprehensions include not just people crossing the border illegally, but also those legally seeking asylum at ports of entry.

The disasters above were facilitated in part by the massive immigration enforcement actions of President Donald Trump, whose administration has essentially clogged the adjudication system. People detained by Border Patrol are only supposed to be held in these facilities for a maximum of 72 hours for processing. Then they're supposed to be transferred to other agencies that handle cases. But as the report notes, all the immigration facilities run by Immigration and Customs Enforcement (ICE) and Health and Human Services (HHS) are already overfull, leaving these folks trapped in facilities designed for short-term detention. The report explains:

Border Patrol was holding about 8,000 detainees in custody at the time of our visit, with 3,400 held longer than the 72 hours generally permitted under the [Transport, Escort, Detention and Search] TEDS standards. Of those 3,400 detainees, Border Patrol held 1,500 for more than 10 days.

The report includes a number of unsettling photos of the conditions in the Rio Grande Valley centers: 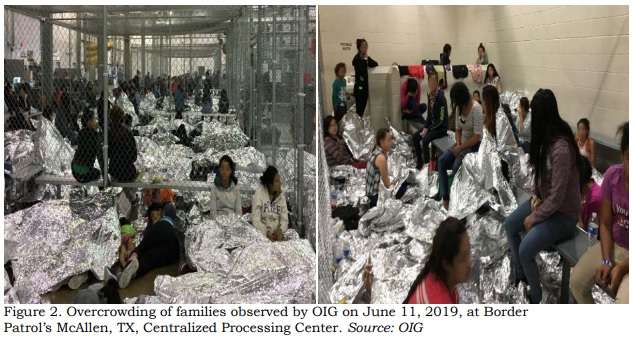 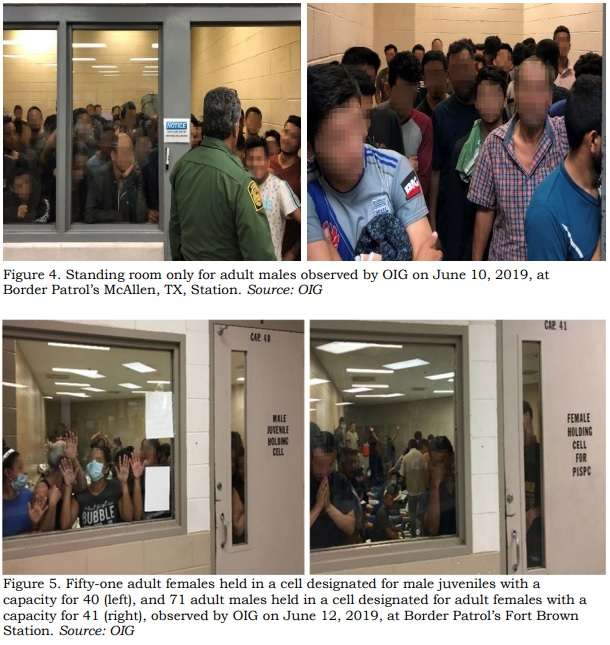 One unidentified senior manager of a facility described the place as a "ticking time bomb," and it's clear the increasingly desperate conditions are creating security problems for detainees and staff alike. The inspectors had to end one visit to a detention center early because detainees who saw them started banging on windows trying to get their attention and held notes to windows to let them know how long they had been held there. The situation was becoming increasingly bad for all parties, including Border Patrol employees. From the OIG report:

The report further notes that children at three of the five facilities they inspected had no access to showers. And while the facilities had baby formula, diapers, juice, and snacks for children, juveniles were not being provided with hot meals as required by the department's own standards.

In its response, the Department of Homeland Security said it is working to increase Border Patrol's capacity, adding two tent cities to the Rio Grande Valley area that can detain an additional 500 people each. The OIG responded to that plan with a reminder that while relieving the overcrowding is a helpful response, there is still the matter that these people are only supposed to be held for 72 hours before being transferred to ICE custody. It is not the role of Border Patrol to hold immigration detainees in custody for more than three days.

This report comes on the heels of a similar report in May about overcrowding during inspections of holding facilities in El Paso. Those facilities have seen a massive 619 percent increase in apprehensions from October 2018 to April 2019 over the previous year's numbers. Again, these are primarily entire families being detained in conditions similar to those found in the Rio Grande Valley area.