Trump's escalating sanctions against Iran and threats against Mexico prove this. 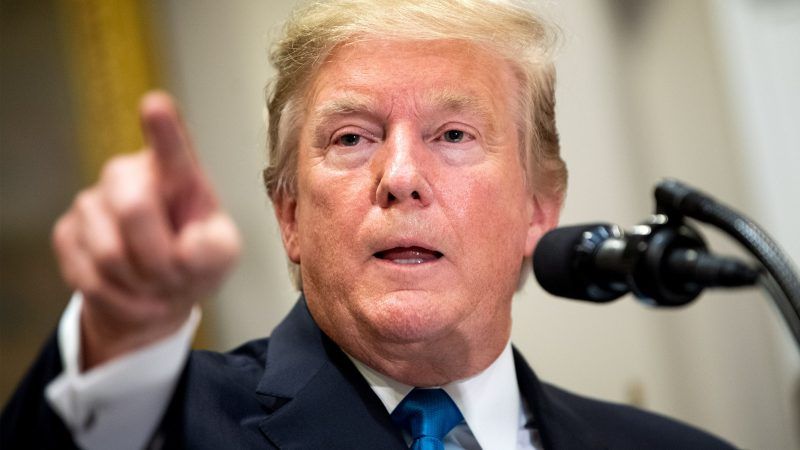 From day one of his presidency, one of Donald Trump's mantras has been "America First." He even invoked it during the rally to launch his 2020 re-election campaign in Orlando, Florida, this week. His supporters on the isolationist right have always insisted that there is nothing sinister about this—all it means is that America should quit meddling in other countries and devote the government's resources to fixing its own problems at home.

But Trump's recent "deal" with Mexico to stop the growing flow of Central American migrants at Mexico's southern border shows that America First is just code for using America's considerable soft and hard power to force other countries to do his bidding. It's a formula not for ending American imperialism, but for replacing a seemingly high-minded one with a nakedly self-serving one.

Trump has never made any bones about the fact that he's an ardent nationalist. In fact, he's been insisting that every country should put its interests first. "A great reawakening of nations" he said at the United Nations, would allow "strong, sovereign nations…to not just coexist but work side by side on the basis of mutual respect."

That's a nice fantasy. In reality, stronger nations freed from rules of international engagement will be showing not their "mutual respect," but their power and their demands. And that's exactly what's been happening under Trump.

The Trump administration tore up the nuclear deal that President Obama signed with Iran, condemning it as "defective" because it would eventually let Iran acquire nuclear weapons. Why a "sovereign nation" shouldn't have the right to these weapons if it deems them necessary for its national security, especially given that Israel, one of its hostile neighbors, possesses them, Trump has never explained. He reinstated sanctions on Iran and then amped them again this weekend, barring it from selling oil and other products to the United States. Worse, he announced a suite of sanctions targeting other countries, many of them U.S. allies, that want to do business with Iran, disrespecting their sovereign decisions.

But at least Trump is punishing Iran in the name of preventing it from acquiring weapons that one day, someday, may pose a threat to U.S. security. That, however, isn't remotely the case with Mexico.

Trump is wielding the International Emergency Economic Powers Act, a law that was meant to retaliate against foreign enemies in hostile situations, to threaten Mexico with sanctions. Trump proposed imposing a 5 percent tariff on all Mexican goods right off the bat, going up another 5 percent every month to a maximum of 25 percent until Mexico reduced the flow of fleeing Central American migrants to his satisfaction. Given that the U.S. is Mexico's biggest export market (beating Canada, its next biggest, by a factor of 24), Mexican President Andrés Manuel López Obrador (a nationalist in his own right) is now scrambling to show results before Trump's July deadline.

To this end, Mexico has agreed to expand their cooperation with Trump's "Remain in Mexico" policy and warehouse even more migrants as their asylum petitions wend their way through America's broken and backlogged immigration system. The living conditions in these camps, often in the middle of towns, are of course abysmal. Food, water, and medical help are all in short supply and migrants live off handouts from poor locals. They can't work—not only because they don't have work permits buts also because there are no jobs—and their kids have no schools to go to.

Beyond that, Mexico has dramatically scaled back the transit visas it issues these migrants, insisting that they undergo a much longer—and harder—process to obtain humanitarian visas instead. This forces many of them to travel through the country without proper authorization. That becomes a real problem when they have to pass through interior checkpoints that Mexico has hastily constructed to check the papers of anyone who looks like a migrant. Thanks to U.S. pressure, big portions of Mexico are becoming like the 100 miles adjacent to America's border that the American Civil Liberties Union (ACLU) calls a "constitution-free zone," where immigration authorities have sweeping powers to stop and question people.

That's not all, however.

Mexico has never really maintained a border police force. Although it is tight-fisted in handing out guest worker visas to its southern neighbors, its border with Guatemala has been a porous sieve that residents and commercial traffic from both sides travel through relatively unencumbered. Because of Trump's arm-twisting, Mexico has agreed to deploy 6,000 National Guard troops to enforce this border. There is even fear that Trump may demand that Mexico turn its meager fence into a full-fledged wall down the road.

In short, Mexico is setting up detention camps, erecting checkpoints, expanding the police state,  potentially militarizing its border and generally turning itself into a fortress just to appease its superpower neighbor.

Trump's isolationist base loathes neocons because they tried to export American democracy—impose a "new world order"—at gunpoint. But Trump's America First-ism is forcing Mexico to turn itself into an extension of America's border police. It's becoming a buffer state to protect American sovereignty. If neocons wanted to turn other countries into America's protectorates, Trump wants to turn them into America's protectors.

Over time, an America that plays by no rules except narrowly selfish ones will breed resentment and anger. It will certainly force a reordering of the world—but around an anti-American axis. Trump's saber-rattling against Iran is already bringing Russia and China closer together with both countries blaming the U.S. for heightened tensions. Mexico may be succumbing to Trump's threats right now but it is unlikely it will keep acting against its interest indefinitely, especially as ordinary Mexicans inevitably lash back against "gringo" demands.

America First is American imperialism. It is simply a euphemism for using America's power to impose America's will on weaker nations. Trump supporters who believe that it is some kind of noble, live-and-let-live isolationism are just deluding themselves.