Bernie Sanders Wants To Cancel All Student Debt and Make College Free, at a Cost of $2.2 Trillion 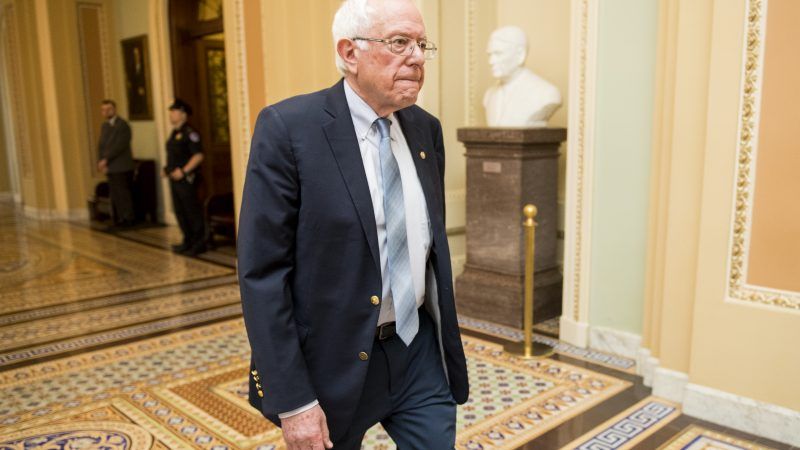 Sen. Bernie Sanders (I–Vt.) unveiled his latest policy proposal on Monday, and it comes with an eye-popping price tag: The democratic-socialist presidential candidate wants to erase all student debt and make college completely free—at a cost of $2.2 trillion over 10 years.

"This is truly a revolutionary proposal," said Sanders, according to The Washington Post. "In a generation hard hit by the Wall Street crash of 2008, it forgives all student debt and ends the absurdity of sentencing an entire generation to a lifetime of debt for the 'crime' of getting a college education."

Sanders' plan is indeed revolutionary. It goes much further than his previous free-college plan, which eliminated tuition costs for only those making less than $125,000. It also goes much further than the debt-relief plan currently being touted by Sen. Elizabeth Warren (D–Mass.), which is means-tested and takes earnings into account. Under the Warren plan, those making less than $100,000 would receive up to $50,000 in loan forgiveness, while those making substantially more would receive less.

The Sanders campaign is clearly concerned that Warren, his main rival for the support of progressives chiefly motivated by income-inequality issues, is surging in the polls. No doubt he would like to offer the left-wing Democratic base something to get excited about. Well, this is certainly something.

In contrast to the Warren plan, the Sanders plan is no-holds-barred. It eliminates all student loan debt, even for high-income degree holders who are perfectly capable of paying back what they borrowed. And it makes all two- and four-year colleges completely free.

To pay for this massive, massive bailout of the well-educated, Sanders will propose new taxes on financial transactions, Wall Street speculation, and bonds. Whether the government could actually raise the full $2.2 trillion via these means is contested by some economists. When asked how to pay for his pie-in-the-sky proposals, Sanders is often evasive. His Medicare for All plan, which could cost as much as $25 trillion over 10 years, lacks a specific, concrete funding source.

Aside from its staggering cost, the policy is flawed in the same way that so many plans to cancel student debt are flawed: It rewards people who made unwise investments and transfers money to comparatively well-off people. The primary beneficiary of a college degree is not society at large, but the degree holders themselves, who tend to be more privileged and have better financial prospects than those who don't have college degrees.

Making college free, of course, would encourage more people to attend. This would likely worsen the sort of "credentialist arms race" that the economist Bryan Caplan warns about in his excellent book, The Case Against Education.

But the biggest issue with Sanders' plan may very well be that it makes Warren's tamer, but still wildly expensive plan—it costs a mere $1 trillion, instead of $2 trillion—seem acceptable and moderate by comparison.