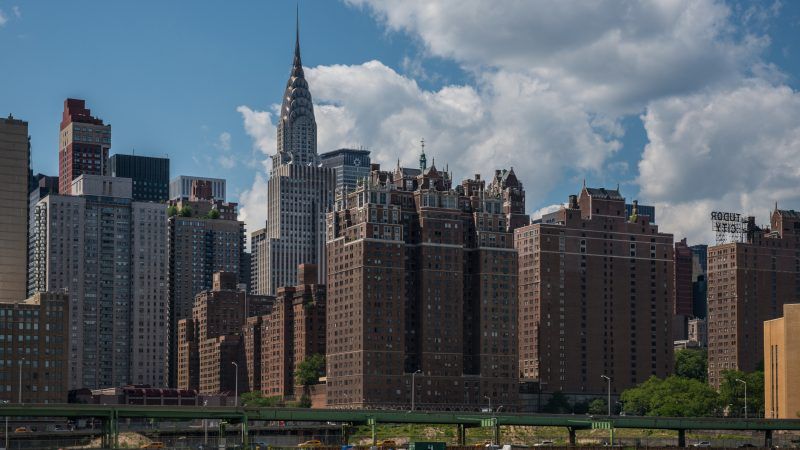 New York's rental regulations took a giant lurch to the left this past week, with state lawmakers passing a new bill that makes it harder for landlords to raise rents and expands legal protections for all tenants.

This new legislation is part of a nationwide surge of rent control policies. Oregon passed the first statewide rent control law in February, and California passed a similar bill in May.

Getting New York's rental regulations across the finish line were a new crop of progressive state legislators that made "universal rent control" a central component of their agenda. Nevertheless, the new law includes a number of provisions that will primarily benefit already well-off renters.

"These reforms give New Yorkers the strongest tenant protections in history," said Senate Majority Leader Andrea Stewart-Cousins (D–Yonkers) and Assembly Speaker Carl Heastie (D–Bronx) in a joint statement. "For too long, power has been tilted in favor of landlords and these measures finally restore equity and extend protections to tenants across the state."

On Friday, the New York Legislature passed the Housing Stability and Tenant Protection Act of 2019, which replaces existing rental regulations that were set to expire this past Saturday.

The legislation targets New York City's roughly 900,000 rent-stabilized apartments. These generally include apartment buildings of six or more units that were built before 1974, as well as newer multifamily properties that received a tax abatement.

Rents at these units are controlled by the city's Rent Guidelines Board (RGB), which limits how high their owners are able to raise rents. Last year's allowable increase was 1.5 percent for one-year leases and 2.5 percent for two-year leases.

Under New York's old regulations, property owners were allowed to "deregulate" these units (charge market prices for them) if rents reach $2,774 a month at a vacant unit, or if they reach that same amount at units occupied by a tenant making $200,000 a year or more.

The prior regulations also allowed landlords to permanently raise rents by as much as 6 percent at rent-stabilized units following a major capital improvement to the entire building, like installing a new roof or boiler. Landlords were also permitted to pass on a percentage of the cost of improvements to individual apartments (like installing a new dishwasher) as permanent monthly rent increases.

The new law passed upends all of this; landlords are no longer allowed to deregulate rent-stabilized units after they pass a specific rent or income threshold.

These new rules are intended to close "loopholes" that have led to a steady erosion of the number of rent-stabilized units. But by making New York's rent stabilization law more rigid, they also exacerbate the policy's flaws.

For starters, by eliminating landlords' ability to deregulate their units upon reaching rent and income thresholds, the state has made rent stabilization even more stacked in high-income earners' favor.

A Wall Street Journal analysis of Census Bureau data published last week found that the price of a median rent-stabilized unit in wealthier Manhattan was $1,400—about $1,600 less than median market-rate rents. In the less affluent boroughs of Queens, Brooklyn, and the Bronx, the difference in price between median rent-stabilized apartments and market-rate units ranged between $130 to $250.

By abolishing high-rent and high-income deregulation, New York's legislature is ensuring that the discount for high-income renters will continue to grow.

Limiting the ability of property owners to claw back the costs of capital improvements with higher rents will also decrease their incentive to keep buildings in a state of good repair, warns the Manhattan Institute's Howard Husock.

"The opposite of gentrification—call it shabbification—would emerge, as city housing stock becomes more and more degraded," wrote Husock in May. "Middle-class and working-class neighborhoods, where rents are often not that high (in some outer-borough neighborhoods, market rents are lower than permitted by law) would be at particular risk."

The new law also caps security deposits at one month's rent, statewide, and gives all cities in the state the power to pass rent stabilization policies. Previously only New York City and few surrounding communities had that right.

Landlords are hopping mad at these changes. John H. Banks, president of the Real Estate Board of New York (REBNY), called the new rental law "a disaster for the City's future" in a statement, saying that "Governor and the Legislature are consigning hundreds of thousands of tenants to buildings that [will] soon fall into disrepair."

Some landlords are reportedly planning to challenge the new law in court.

Provided it withstands these challenges, New York will have given its tenants some of the strongest legal protections in the country. For many, that's an unalloyed good.

Yet, as is often the case with the regulation of rental prices, these new laws don't help poor tenants and they often disincentivize landlords to actually maintain their properties. The more laws tilt the landlord-tenant relationships towards the tenant, the less willing some landlords will be to put their properties on the market in the first place.

The end result of New York's new rental laws may, therefore, be lower rents and greater protections for some, but at the cost of deteriorating buildings, and less supply overall.