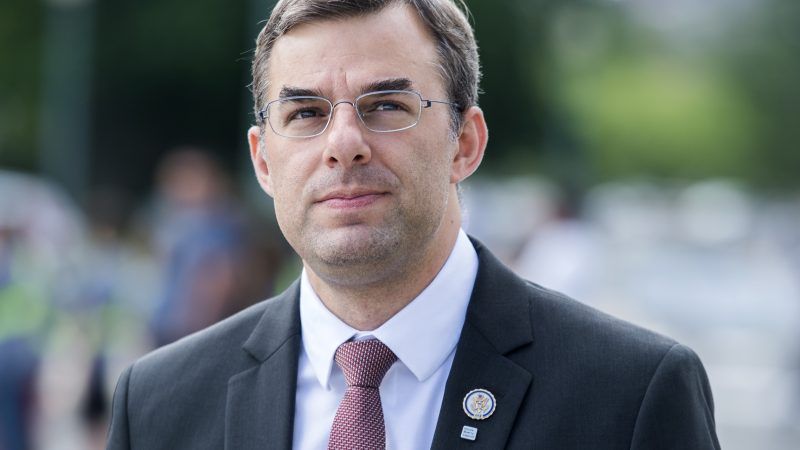 Last night, Rep. Justin Amash (R–Mich.) reportedly stepped down from the board of the House Freedom Caucus, which he helped found in 2015.

The move follows a series of headline-making tweetstorms from Amash taking aim at both President Trump and his backers in Congress, in which Amash, relying on the findings in the Mueller report, argues that the president's conduct is impeachable, and that most Republicans are defending him out of little more than pure partisanship.

Amash's fellow Republicans, even those he is ostensibly close with, have generally not taken kindly to his stance, with the Freedom Caucus recently voting to condemn him for criticizing the president. Trump, meanwhile—never one to skip out on belittling a critic—has in recent weeks trashed Amash as "a total lightweight" and a "loser."

In general, the GOP's attitude toward Amash, the only congressional Republican who has affirmatively connected Trump's conduct with the notion of impeachment, has been dismissive and defensive. Republicans have tended to take Amash's arguments personally, as signs of pointed disloyalty. The job of a Republican, the GOP's responses have suggested, is to support other Republicans, which these days mostly means supporting Donald Trump and whatever it is he does. Amash was attacking Trump, and therefore had to be cut off.

You can certainly read Rep. Justin Amash's recent criticisms of President Trump and the vast majority of elected Republicans who back him as attacks against a president that Amash believes has failed the nation and the office—or on the GOP for its willingness to go along with the same—and you wouldn't be wrong to do so.

But it would be a mistake to assume that's all Amash is doing, or even that is it necessarily the most important aspect of his critique. Amash isn't just a NeverTrump pundit with a congressional office; his target is larger than Trump and the party stalwarts who back him. Rather, he is taking aim at the binary choices offered by the Republican/Democrat duopoly, the unthinking partisanship it seems to require, and the ways that partisanship has made Congress less willing to exercise its constitutional duties as a co-equal branch of government. Amash isn't just taking on Trump; he's making a systemic critique of the two-party system.

Arguably the most important part of Amash's original Twitter thread came not from his initial conclusion that Trump's conduct was impeachable, but at the end, where he decried the general unwillingness of members of Congress to perform their constitutional duties when doing so would violate their partisan interests.

"Our system of checks and balances relies on each branch's jealously guarding its powers and upholding its duties under our Constitution," he wrote. "When loyalty to a political party or to an individual trumps loyalty to the Constitution, the Rule of Law—the foundation of liberty—crumbles."

Members of Congress on both sides of the aisle made up their minds about Trump's actions without having read the Mueller report, Amash said, resting their conclusions solely on the basis of partisanship. As if on cue, a Republican primary challenger appeared in Amash's district who supported Trump, but amusingly admitted he hadn't read the report.

This wasn't just a narrow criticism of a president or the party that blindly supports him; it was a critique of reflexive partisanship and a system that works from the expectations that party affiliation is the most important (and, in many cases, the only) factor that matters in high-stakes political decisions. It was an institutional critique of a legislature that has lost its willingness to pay a co-equal role in the federal government, and, in the process, has failed both itself and the public it serves.

That critique is one that can be extended beyond the bounds of impeachment, from the broken federal budget process to the reluctance that GOP lawmakers have displayed to check Trump's worst instincts on trade—even when Republican lawmakers are known to be opposed to his actions. What's at stake in these debates isn't just bad policy outcomes, but a kind of institutional degradation in which constitutional order breaks down. By choosing to prioritize partisanship, Amash was saying, Congress had chosen to be weak.

Implicit in this idea and in much of Amash's politics is a sense that the two-party system is failing to provide the range of choices that are now de rigueur in nearly every other area of life. Modern economies have become fragmented and personalized, offering people a vast array of choices about everything from diet to entertainment to sexual identity. But politics has largely been static, offering two basic choices—a default liberal and conservative option—that don't capture the variegated reality of individual political predispositions and outlooks.

And there are signs, even beyond Amash, that the voting public, in the U.S. and elsewhere, yearns for more: Look at the recent elections in Europe, where Green won big in Germany, and Labour and Conservatives lost in the U.K. The biggest loser was centrist politics as usual. Or look at Bernie Sanders, who is carving out a kind of sub-party within the Democrats, and pulling the party his way in the process. Or look, even, at Donald Trump, who ran on the GOP ticket, and shares some tendencies with the Republican base, but isn't exactly a Washington Republican in the classic sense, and whose campaign and election, at least, were a result of frustration with the GOP in its most conventional form.

Complaints about the limited choices offered by the two-party system are as old as the two-party system. And it's generally true that first-past-the-post voting systems tend to result in two-party dynamics, meaning that third parties are inherently disadvantaged in the U.S. electoral system. But there's an alternative to the third (or fourth, or fifth) party dream, as attractive as it may be—and that's the politics of individuals and ad hoc, issue-based coalitions, a politics of principle rather than partisan loyalty above all. Amash is modeling that sort of politics.

The ball is in our court, Congress. https://t.co/idpQo1xItH

That sort of politics doesn't typically sit well with the Red Team/Blue Team mentality that drives today's politics. It has been telling to see that the most consistent criticisms of Amash have amounted to arguments that he is aiding Democrats and seeking attention for his own political ambitions—as if the point of politics is not to advance the ideas you believe in or form useful coalitions to achieve those goals. (And if attention-grabbing tweets are now off-limits, Republicans may need to reconsider their feelings about Trump.)

But this form of idiosyncratic outsider politics, while not always successful, can nonetheless produce real results, reshaping a party from within, or forcing change upon it from the outside. While Amash may be making little impact on the Republican party itself, which is reflexively pro-Trump and likely to remain that way for the near future, he may be having an effect on those who see themselves as unrepresented by the two-party system as it is currently constituted. Over the last few weeks, voters who self-identify as independent have broken towards impeachment. The shift has pulled the entire nation towards impeachment, and it occurred at almost exactly the same time as Amash took his stand.

Amash closed his original tweetstorm with the idea that "America's institutions depend on officials to uphold both the rules and spirit of our constitutional system even when to do so is personally inconvenient or yields a politically unfavorable outcome. Our Constitution is brilliant and awesome; it deserves a government to match it." It was a call to place individual commitments over party power and to uphold a system of government that can offer more than two bad choices, but rarely does. Almost alone among Republicans, Amash seems up to this task.