Union leaders made charters a major point of contention during the January protests. 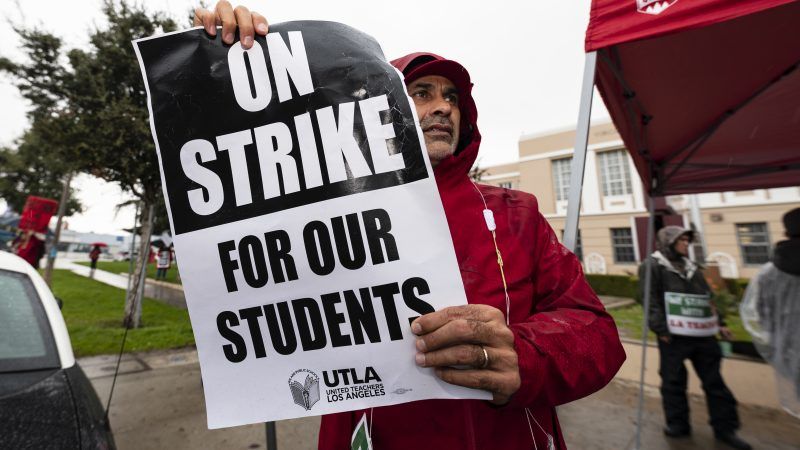 Teachers' unions frequently oppose charter schools. Nowhere has that been more true than in California, where union leaders zeroed in on charters during the massive teachers' strike that occurred this past January in Los Angeles.

The California Policy Charter School Task Force—created as a result of the workplace negotiations in that strike—released a report this week recommending strict limitations on charter schools. Charters, which receive public funding but are independently run, typically aren't unionized, so their proliferation siphons off potential dues-paying members from the union.

Critics also take issue with how charters are regulated, as the schools aren't always beholden to the same requirements as traditional public schools, and charters themselves are often subject to different oversight standards. The California Policy Charter School Task Force, which includes both union and charter school representatives, unanimously endorsed the creation of a statewide entity to standardize oversight requirements across all charters. A majority of the board also wants to establish universal guidelines, "such as rubrics or handbooks," for charter applications.

But increasing such regulations on charters is a flawed approached, particularly when considering that the schools are known for employing innovative approaches to education. Why hobble charter schools with unnecessary new requirements?

The California Policy Charter School Task Force report also advises that a one-year moratorium be placed on new virtual charter schools, during which time researchers would delve into their operational practices and procedures to ensure they provide an adequate education.

In addition, the report recommends that school districts be granted almost full discretion in authorizing or denying charters, and says that districts should be permitted to reject a charter petition based on the "fiscal impact" it poses. In other words, a school district could rebuff a new charter if officials felt the competition would burden the existing public schools in the area. That requirement would almost surely doom many new charters from getting started.

The report is now in the hands of Gov. Gavin Newsom (D). We'll have to wait and see how seriously he takes its recommendations.