The ruling says it's acceptable for cities to use ordinances to protect some businesses from competitors. 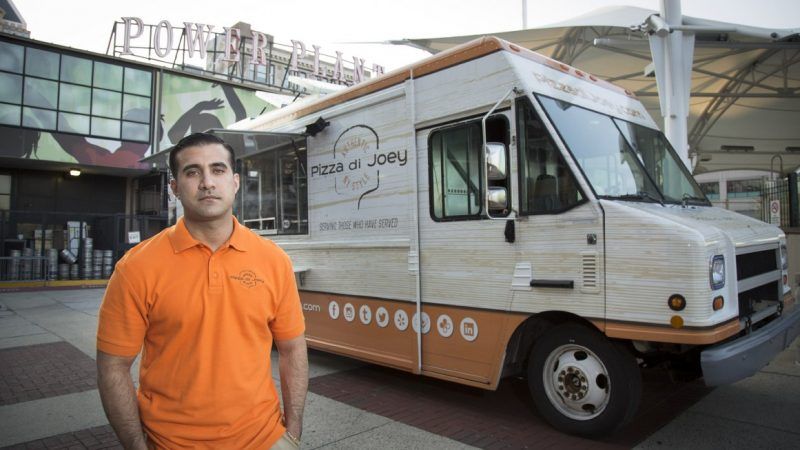 First Chicago, now Baltimore: Another court has kicked entrepreneurship in the teeth and affirmed a city's oppressive restrictions on where food trucks can operate.

Maryland's Court of Special Appeals yesterday restored a city ban on food trucks operating within 300 feet of any restaurant or shop where similar foods are sold. This is just a week after Illinois' Supreme Court upheld the somewhat similar rules that have driven many vendors out of town in Chicago.

In Baltimore, two food truck operators challenged the city's ban in 2016 with the help of the Institute for Justice (who also represented food truck interests in Chicago). In Baltimore, the institute argued that the city's 300-foot ban is unconstitutionally vague. It's a criminal statute—a misdemeanor violation for breaking the rules—but the law doesn't define how to determine whether a restaurant is selling food "similar" to the food truck's wares. This vagueness means that vendors might not be sure whether they're breaking the law.

In 2017, a lower court ruled partly in favor of the food trucks. But the judge didn't strike down the law: She enjoined it from being enforced until it was made more clear. She affirmed that the city did have the authority to restrict food trucks, but the law needed to be more specific about how it is to be applied.

This new ruling overturns that decision, stating that statutes can be struck down as "unconstitutionally vague" in Maryland only when they might chill our First Amendment speech rights.

Not only does the ordinance stand, but the decision makes it clear that the law's purpose is "to protect brick-and-mortars from direct competition"—that's exactly the wording used in the decision. Baltimore argues that there's a "free rider" problem when food trucks are allowed to compete with restaurants without having to take on as many burdens, risks, and taxes. But this ignores the trucks' trade-offs (more limited menus, smaller windows of market opportunities) and their economic contributions to the city. More importantly, it treats consumers' desires as completely irrelevant.

The Institute for Justice is disappointed by the ruling. "This decision embracing protectionism does not square with the Maryland constitution," Senior Attorney Rob Frommer says in a prepared statement. "For decades, Maryland courts have turned away efforts to stifle one private business in order to benefit another. Economic liberty is the cornerstone of the American Dream and we will continue the fight for that dream at the Maryland Court of Appeals."

Read the ruling here. Below, John Stossel delves into the food truck fights in Baltimore and Chicago: