Amash Doubles Down: 'Some of the President's Actions Were Inherently Corrupt'

Whether or not you agree with Amash, his demeanor this week stands in stark contrast to how most of Trump's defenders—and the president himself—have reacted to Amash's statements. 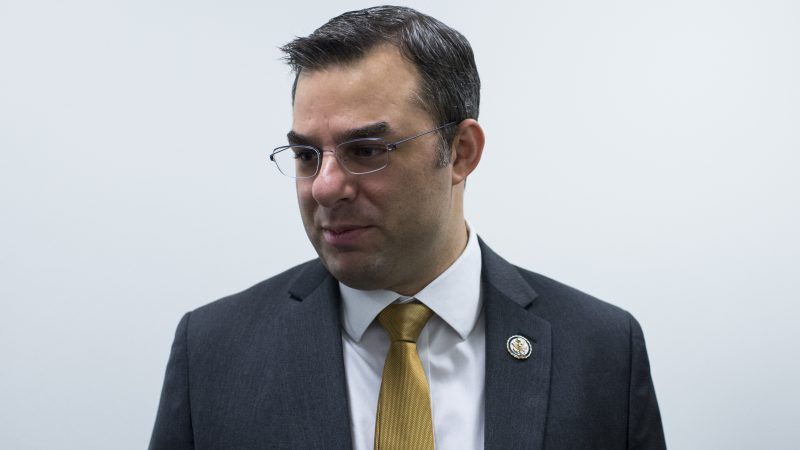 Rep. Justin Amash (R–Mich.) has doubled down on his assessment that President Donald Trump engaged in impeachable conduct, as detailed by the report from Special Prosecutor Robert Mueller.

"Mueller's report describes a consistent effort by the president to use his office to obstruct or otherwise corruptly impede the Russian election interference investigation because it put his interests at risk," Amash writes at the beginning of a 20-tweet thread highlighting a number of incidents outlined in the Mueller report where Trump appears to have attempted to shut down the investigation.

Specifically, Amash points to Trump's request to the FBI director that the bureau stop investigating Michael Flynn, Trump's order that then–White House Counsel Don McGahn have Mueller removed from the investigation (a demand McGahn ignored), and Trump's subsequent decision to tell McGahn to lie about the incident in public records.

On Saturday, Amash became the first Republican member of Congress to suggest that Trump should face impeachment proceedings for his attempts to interfere in the Mueller probe. In that statement, also posted to Twitter, the Michigan congressman blamed his fellow Republican legislators for choosing to defend the president rather than the Constitution in the wake of Special Prosecutor Robert Mueller's report. He also warned that putting Trump's interests ahead of the country's would put the rule of law at risk.

The reactions from the president and his supporters have been instructive. Trump lashed out by calling Amash "a loser." House Majority Leader Kevin McCarthy (R–Calif.) went on television to declare that Amash "votes more with Nancy Pelosi than he ever votes with me," which isn't even close to being true. The House Freedom Caucus, which Amash co-founded, voted to condemn him for having the audacity to exercise his freedom to criticize the president. A Trump-supporting state representative announced plans to primary Amash in 2020.

Though it all, the libertarian-leaning congressman has maintained a level head. He's turned down what are surely endless requests to appear on cable news, but he did take time to talk to a group of schoolchildren from Michigan who were visiting the Capitol this week.

I was able to chat with Justin Amash after he met with a group of eighth graders this afternoon. Story here: https://t.co/xhjdDqSym1 pic.twitter.com/kMccKoT1Fi

He has behaved, in other words, like a dignified representative of the people who is thoughtfully approaching one of the most serious questions a member of Congress can consider: Should the sitting president be removed from office?

Whether or not you agree with Amash's conclusions on that question, his demeanor over the course of this week—and his rational outline of his specific criticisms of Trump—stand in stark contrast to how most of Trump's defenders and the president himself have reacted. That doesn't mean Amash is right, of course, but it should give conservatives pause before they launch into another round of histrionics.

Mueller's report describes a consistent effort by the president to use his office to obstruct or otherwise corruptly impede the Russian election interference investigation because it put his interests at risk.