Joseph Heller's opus is drained of power in this tepid adaptation. 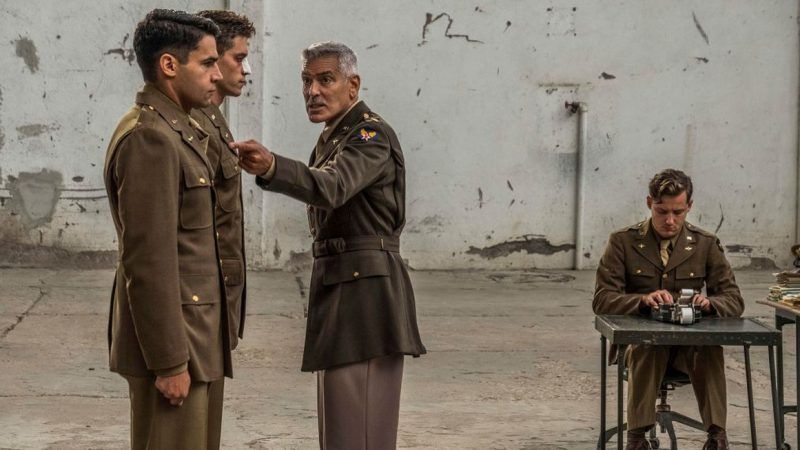 When Joseph Heller's epically rebellious novel Catch-22 was published in 1961, the film rights sold almost immediately.  Yet it took nine years before it was turned into a movie. Part of the delay was no doubt due to the book's themes. It was scathingly anti-war, anti-authority, anti-corporate, anti-bureaucracy, anti-practically every foundational belief of 1950s America.  And it shockingly vented its rage and contempt through the milieu of World War II, the unambiguously Good War against Hitler and Tojo, a war in which millions of American families had a blood stake.

But there was another problem with bringing Catch-22 to the screen: its circular and repetitive narrative, seemingly random and fraught with free association, but actually one of the most intricately constructed works in all of American fiction. Catch-22 is not a conventional novel and it doesn't adapt well to conventional filmmaking.

But don't take my word for it. Watch Hulu's new six-hour miniseries version of Catch-22, a textbook exercise in straightforward television production, and then hunt around for the anarchically scripted 1970 Mike Nichols film.  The Nichols film still gleams with the diamond-hard fury of the book and echoes with its mad laughter. The tepid Hulu series has neither. Next to the movie, the Hulu series looks like a pallid corpse drained by a vampire.

Like Heller's novel, the series is centered around Yossarian (Christopher Abbott, notable for being hounded off the set of HBO's Girls after a run-in with its loon producer Lena Dunham), a young American crewman in a B-25 bomber flying missions off the Italian island of Pianosa late in World War II.

Yossarian hates the totalitarianism of military life, but he loathes the fact it's trying to kill him, sending him out every day on another aerial mission against mortality. Arguments about Hitler do not impress him. "The enemy," he tells one of his flyboy friends, "is anybody who's gonna get you killed, no matter which side he's on."

Yossarian tries nearly every dirty trick in the book—from faking illness to sabotaging his own plane to falsifying intelligence maps to get particularly deadly missions canceled—to get out of flying, always unsuccessfully.  Against his better judgment, he even tries a clean one: Completing the number of bombing runs necessary to get rotated out of combat.

But his commander, Colonel Cathcart (Kyle Chandler, Friday Night Lights) blocks Yossarian by continually raising the number, from 25 to 30 and eventually all the way to 60, in an attempt to get himself promoted to general at the expense of his own men's lives.

That drives Yossarian crazy, which seems to open another escape route: Surely crazy men can't be sent into combat. No, agrees Doc Daneeka (Grant Heslov, a character actor who's also one of the show's executive producers). But there's a catch: the infamous Catch-22 of the title.

"Anyone who wants to get out of combat duty isn't really crazy," Daneeka explains. "A concern for one's own safety, in the face of danger real and immediate, is the process of a rational mind."So Yossarian is crazy and can't fly combat missions until he asks to be grounded, at which time he becomes sane and has to.

That reasoning itself is circular and crazy, which makes it the very essence of Catch-22 : The gap between madness and sanity, the lunacy of others thinking they are entitled to run your life and the lunacy of letting them do so, the craziness of men killing one another over lines on a map.

And this is an essence that the producers and directors of Hulu's production (including George Clooney, who also has an acting role) repeatedly fail to grasp, most fundamentally in their belief that Catch-22 can be told chronologically rather than in the scattershot way Yossarian sees it.

But their incomprehension of the book's cracked, absurdist core is a recurring problem that ultimately undoes the production altogether. Over and over, they leave out characters and scenes from the book that are indispensable to Catch-22's message, that the authorities governing life are cruel and irrational.

Or worse yet, the elements are present but warped completely out of significance:

So much is missing or misconstrued in Hulu's Catch-22 that it's tempting to evaluate the show in terms of what it lacks rather than what it includes.

The latter includes most of Yossarian's screwball buddies, including the idealist Clevinger (as Heller wrote of him, "The case against Clevinger was open and shut. The only thing missing was something to charge him with."); the naïve but earnest rich kid Nately (who imagines he can marry a Roman whore and take her home to the family mansion in Connecticut), and the hotshot pilot McWatt, who tries to explain to Yossarian that fretting about death is useless because "it's all a numbers game. When your number's up, your number's up."

Some of the supporting performances are very good even when poorly written, particularly Graham Patrick Martin (Two and a Half Men) as Orr, the pilot whose luck is so bad that it's almost as if he's practicing being shot down, and stage actor Daniel David Stewart as Milo, the oily, avaricious mess officer who personifies state capitalism.

But Abbott's Yossarian is much less successful, too calculating and without the fractured streak that made Heller's character so indelible. And Abbott becomes even less convincing after the first couple of episodes, which employ great chunks of Heller's dialogue. As Heller's prose fades away, so does Yossarian and, for that matter, the rest of the show, which doesn't really end so much as fizzle away to uncertainty and inconclusion.

My suggestion is that if you're interested in watching a screen version of Catch-22, hunt around for a streaming version of the Nichols film, which stands up surprisingly well nearly 50 years later. Or take the opposite route and watch the 1973 pilot for a CBS comedy starring Richard Dreyfuss as Yossarian, an attempt to rip off M*A*S*H that mercifully died a quick death. It's a reminder that war may be hell, but 1970s sitcoms are even worse.

This review has been updated to correct the name of the actor portraying Orr.