Will 2020 Democrats Save Us From Trump's Protectionist Trade Policies? Don't Count on It.

Trade has made Americans better off, and Democrats should use every opportunity to make that argument in the face of Trump's trade war. 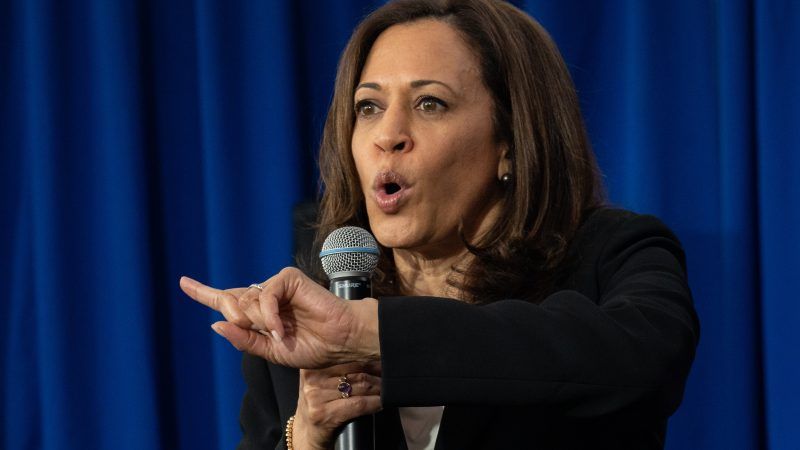 President Donald Trump has raised tariffs on American allies, embroiled the country in a potentially economically destructive trade war with its biggest trading partner, and struggled to sell Congress his proposed rewrite of the North American Free Trade Agreement (NAFTA).

But if you're looking for an alternative to Trump's protectionism, you probably won't get it from the Democrats seeking to replace him as president. The Democratic candidates say they are opposed to how Trump has been handling the trade war, but they have struggled to articulate a worldview that sets them apart from the White House's current occupant. Some are even hitting the same protectionist notes as Trump, trying to compete with or outflank him on trade. They might only be hurting themselves in the process.

Harris responded by saying she would prefer to work with allies to confront China rather than going it alone. She also criticized Trump's "irresponsible" preference "for conducting trade policy, economic policy, foreign policy by tweet." So far, so good.

But Tapper pressed on, wanting to know if Harris would disagree with the basic premise underlying Trump's anti-trade views: that American workers have been burned by decades of bad trade deals. And that's all it took to make Kamala Harris sound like Donald Trump.

"I believe that there is no question that, over many decades, the rules have been written in a way that have been to the exclusion of lifting up the middle class and working people in America and working families in America," Harris said. "I believe that we have got to have policy that better protects American workers and American industries."

Harris later added she would not have voted for the original NAFTA deal if she had been in Congress when it was passed in 1994.

It's impossible, of course, to paint a 23-candidate Democratic primary field with a single brush. But Harris' tactic of criticizing the style but not the substance of Trump's trade policies—while simultaneously echoing his argument that trade deals have been bad for Americans—has been common in this early stage of the campaign.

Perhaps they are waiting to see whether the latest round of tariffs causes more overt economic damage to the country before they take a stand for free trade. Perhaps they are worried about giving Trump an opening to attack them. Perhaps their ties to protectionist labor unions are to blame. But regardless of the reason, many Democrats may be missing a huge opportunity by going soft on Trump and refusing to embrace the benefits of trade.

Polls show that a majority of Americans believe that free trade in general—and NAFTA in particular—have improved both their own lives and the country as a whole.

They probably believe this because it happens to be true. The mere existence of NAFTA boosts the U.S. economy by about 0.5 percent per year, which adds up to quite a lot over more than two decades. The Commerce Department says that more than 11 million American jobs are directly related to foreign investment or the export of American goods. A 2017 analysis by the Peterson Institute for International Economics, a trade policy think tank, shows that international trade boosted Americans' per household income by about $18,000 since 1950—and that the gains flowed disproportionately to lower-income households.

Despite what you might hear at a Trump rally, there is little doubt that trade has made Americans better off. But instead of taking the opportunity to put Trump on the defensive, many frontrunning Democrats keep pandering to the minority of voters who wrongly believe otherwise.

Sen. Bernie Sanders (I–Vt.) has already published a trade platform that calls for more "Buy America" programs and, as Trump often does, criticizes America's trade deficit. On the campaign trail, Sanders has touted his longstanding opposition to NAFTA and to the Trans-Pacific Partnership (TPP), an Obama-era trade compact that would have linked the U.S. with a dozen other countries around the Pacific. Trump pulled America out of the TPP negotiations shortly after taking office.

Even where Democrats have not sounded protectionist notes, they haven't been vocally pro-trade either. Pete Buttigieg, the mayor of South Bend, Indiana, tweeted a reminder this week that Trump's tariffs were nothing more than taxes on Americans, but he has otherwise been silent about trade issues. During his unsuccessful 2018 Senate run in Texas, Beto O'Rourke went hard against Trump's trade policies, which he said were imposing direct economic harms on Texan small businesses that depend on trade with Mexico and other nations; in the past he has defended NAFTA's impact on both the country in general and Texas in particular. But he hasn't been pushing that message as hard in the early stages of his presidential run.

Meanwhile, Democratic voters seem to be embracing trade more than ever. Polling by the Pew Research Center shows that 72 percent of Democrats believe NAFTA has been beneficial for the United States. A Hill-Harris poll released earlier this month found 58 percent of Democrats believe Trump's trade negotiations with China would result in fewer jobs and less economic opportunity.

And as Democratic pollster Simon Rosenberg has pointed out, Trump's approval rating has been sinking in states where the trade war has been most damaging—electorally important states like Iowa, Pennsylvania, and Michigan.

Some of those numbers probably reflect Democratic voters' antipathy for Trump, not a spontaneous embrace of global trade. Even so, running against Trump's trade policies seems like a no-brainer for any Democrat who wants to win the White House. If an anti-trade candidate emerges from the primary field, Democrats could cede the issue to Trump—and miss a chance to hold him accountable for economic problems caused by his trade war—in a foolish pursuit of a set of blue-collar voters who probably aren't coming back into the fold anyway.

About the only Democrat in the 2020 primary field who seems to be reading those polls is Joe Biden.

Even if Biden wanted to turn against trade now, he couldn't really do it. His political career includes support for NAFTA and for the TPP. During a recent campaign stop in Iowa, Politico reports, he was asked whether it was a mistake to support NAFTA. "No, it wasn't," he replied.

That makes him about as unabashedly pro-trade a politician as you'll find in the current iteration of the Democratic Party. Biden is being attacked by Sanders and others for his trade record, but—what do you know?—he's running away from the field. Even if that's mostly a matter of his high name recognition, Biden's stance on trade almost certainly isn't hurting him.

Voters generally don't think too much about trade when they go to the polls, but that might be starting to change, particularly for Democrats. As Scott Lincicome, a trade attorney and adjunct fellow with the Cato Institute, points out in a recent research paper, surveys of Americans' views on trade "puncture the current conventional wisdom on trade and public opinion—in particular, that Americans have turned en masse against trade and globalization, and that President Donald Trump's economic nationalism reflects the bottom-up policy demands of a silent majority of American voters."

This is not an easy transition to make. Democrats had been skeptical of trade for decades, even though the party started to shift away from that position in the 1990s and continued moving that way as Obama tried to get the TPP deal done. Trump's election has shoved the GOP in the opposite direction, opening up a logical opportunity for Democrats to complete that transition—to be the party that stands for openness and looks outward, in contrast to Trumpist Republicans who want ever more restrictions on the free movement of people and goods.

What are they waiting for?