Perhaps the biggest compliment to Trump's foreign policy is his political opponents largely want to make the 2020 election about domestic issues. 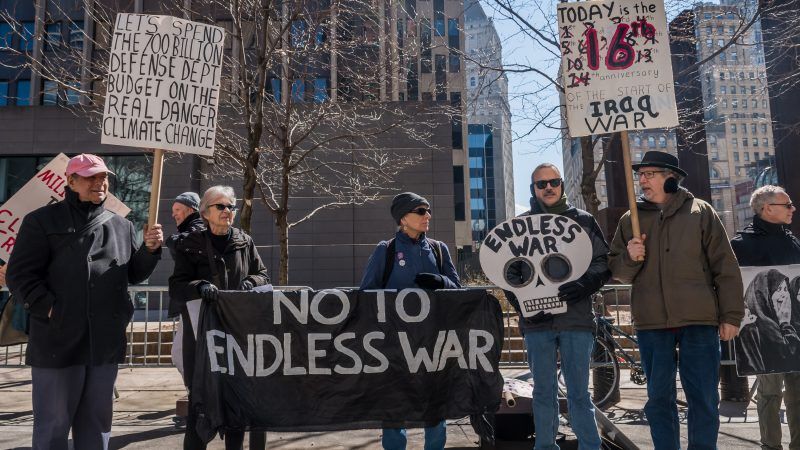 You'd think that with more than 20 Democrats running for President, at least one of them would try to differentiate herself, or himself, from the rest of the field by focusing on the president's role in diplomacy and national security.

It's still early in the campaign. But none of the major Democratic candidates has made foreign policy a focus. Instead the politicians are out there talking mostly about climate change, health care, income inequality, student loan forgiveness, national service, drug rehabilitation, racism—anything, it seems, except for geopolitics or grand strategy.

Part of the reason is that the foreign policy threats seem distant. The Soviet Union is gone and the Cold War is over. The 18 year-olds who will be voting for the first time in the 2020 presidential election were not even alive during the terrorist attacks of September 11, 2001.

When it comes to handling China, the Democratic leader in the Senate, Chuck Schumer (D–N.Y.), has been cheering the president on. "Hang tough on China, President @realDonaldTrump. Don't back down. Strength is the only way to win with China," Schumer tweeted Sunday.

Trump hasn't started any wars, so the Democrats can't really fault him for that. It's not a Vietnam or Iraq War type situation where headlines of U.S. combat deaths dominate politics.

Democrats might be critical of Trump's handling of North Korea, but previous Democratic administrations have also tried to negotiate nuclear issues with Pyongyang.

Occasionally you hear Democrats fault Trump for alienating America's allies. Perhaps Trump wouldn't win the election if the foreign ministries of Germany, France, Canada, or Mexico were the ones voting. But it's not up to them.

Democrats also do complain sporadically about Trump pulling out of the Iran nuclear deal or the Paris climate accord. Pressing those complaints, though, risks relitigating the merits of those agreements.

Russia does get invoked on the campaign trail, but as part of a narrative of Trump corruption or the theft of the 2016 election. It's not as part of any  substantive claim that a Democratic administration would be meaningfully tougher on Moscow in terms of political pressure or economic sanctions.

I've heard Democratic candidates fault Trump for leaving key diplomatic posts, including ambassadorships, unfilled. Without a crisis, though, it's hard to see precise evidence that the lack of representation has damaged American interests.

A Democrat might fault Trump for mismanaging the situation in Latin America to the point where it puts pressure on our southern border. But that requires critics to cede the point that refugee flows approaching the U.S. border are a potential threat rather than an opportunity to welcome new talent. In other words, it's not a line of argument that Democrats are particularly eager to open up.

Trump's dealings with Saudi Arabia, whose agents apparently killed and dismembered a Washington Post columnist, are another possible line of attack. There's not much downside for a Democratic primary candidate in Saudi-bashing. If Trump can make the case, though, that friendly relations with the Saudis have contributed to low retail gas prices for American drivers, this too may be a futile theme for the Democrats.

It's not that Trump has been a surpassingly brilliant foreign policy president. It is true, though, that he's been cautious about committing American troops. He's kept his promises to withdraw from the Iran deal, move the American embassy in Israel to Jerusalem, and try to renegotiate better trade deals with Canada, Mexico, and China.

Trump's harshest critics on the right suggest that the reason he's not attracting a lot of foreign policy criticism from Democrats is that his threats of trade tariffs, combined with hesitance to use military force, mean that Trump has been governing with a Democrat-style foreign policy. Yet the presence of experienced Republican policy hands like national security adviser John Bolton has reassured conservatives, as has the increased economic pressure on Iran.

All it would take is one or two large-scale terrorist attacks against American targets, or a trade-war-related stock market slide, for Trump's critics to begin arguing that the president's policies have made America less safe. So far, though, it hasn't happened.

Perhaps the biggest compliment to Trump's foreign policy is that in an economy with the lowest unemployment in 50 years, 3.2 percent GDP growth, and stable prices, his political opponents largely want to make the 2020 election about domestic issues. If the Democrats can't find some way between now and Election Day to make Trump seem vulnerable on national security, it will make retaking the White House that much tougher for them.