It's Time for Charlottesville To Remove Its Confederate Monuments

They belong in the dustbin of history, but a state law stands in the way. 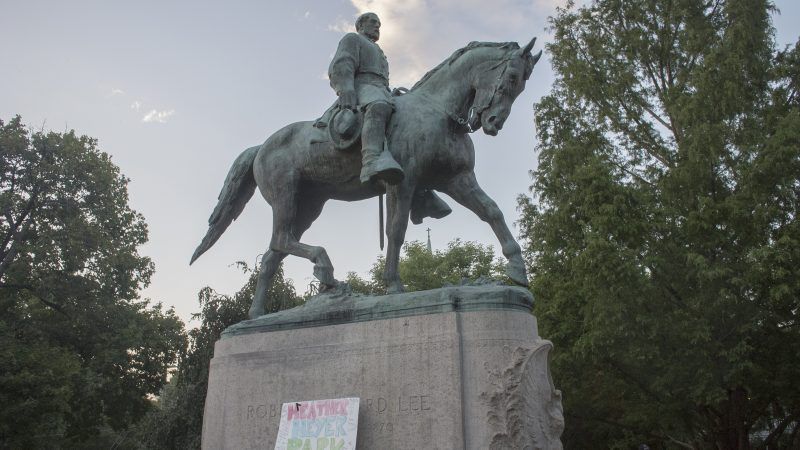 Charlottesville's Confederate monuments are here to stay, a Virginia judge ruled this week, reigniting debate over whether statues of Gens. Robert E. Lee and Stonewall Jackson deserve a place in the public square.

"While some people obviously see Lee and Jackson as symbols of white supremacy, others see them as brilliant military tacticians or complex leaders in a difficult time," Judge Richard E. Moore of the Charlottesville Circuit Court says in a letter detailing his decision. "In either event, the statues to them under the undisputed facts of this case still are monuments and memorials to them, as veterans of the Civil War."

The ruling comes nearly two years after the Unite the Right rally, where white supremacists carrying tiki torches and chanting "Jews will not replace us" marched in Charlottesville to protest the removal of Lee's statue. The demonstrations culminated with the death of a counterprotester after a white nationalist rammed a car into a crowd of people.

Moore's decision hinges on an early 20th century law that allows local governments to approve the construction of war memorials but prohibits them from taking those same monuments down without the state government's approval. The Charlottesville City Council acted in defiance of this, a lawsuit alleges, when it voted in February 2017 to remove the statue of Lee situated in a public park that used to bear his name. Following the Unite the Right demonstrations, local officials also voted to remove Jackson's memorial, which the lawsuit was then amended to include.

"It's based on a flawed law, so the law doesn't make much difference," Bob Fenwick, a former Charlottesville City Council member, tells the local CBS affiliate. "It was a public process, it was a lawful process, so that's our case."

The law is flawed, and it should be amended. If a local governing body may erect monuments without state approval, it follows naturally that the exact same officials should be permitted to follow the exact same processes for their removal. They know the needs of their constituents far better than state officials, who are further removed from the daily goings-on in local communities.

Charlottesville's leaders have spoken, and they believe the monuments should come down. And they should.

It is not lost on me that the vast majority of Confederate monument admirers aren't waving tiki torches in service of white nationalism and are genuine in their calls to preserve heritage. But as Reason's Ron Bailey—a Charlottesville resident—notes, those concerns are misplaced when considering the historical context, much of which is unknown among many people born and bred in the South. He writes of his experience in 1963:

My third grade Virginia history book referred to the Civil War as the War Between the States and asserted that that conflict was chiefly over state's rights. Virginia Generals Lee, Jackson, and Stuart were portrayed as honorable and heroic defenders of Southern rights.

Not much has changed. I grew up in Virginia a few decades later, and my teachers up through high school described the Civil War as a violent skirmish waged over federalism. It wasn't until after I graduated from the University of Virginia in 2013 that I learned the central role played by slavery.

As the legal fight continues, the City Council has an unlikely ally in removing Lee's monument. It would be "wiser…not to keep open the sores of war but to follow the examples of those nations who endeavored to obliterate the marks of civil strife, to commit to oblivion the feelings engendered," wrote Robert E. Lee in 1869, as he declined an invitation to place memorials for fallen soldiers.

The state would do well to get out of the way and let Charlottesville, and Lee himself, commit the monuments to oblivion—along with all the ugly feelings that come along with them.