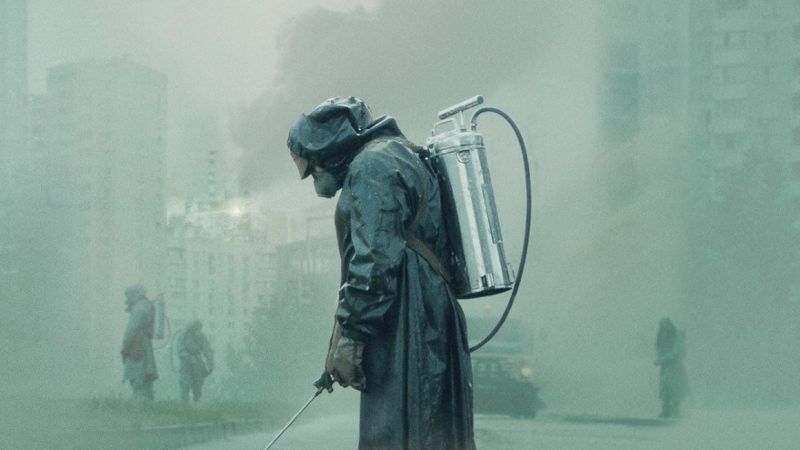 In the sepulchral darkness underneath the Chernobyl nuclear power plant, where poisoned water from the wrecked water-cooling tanks swirls madly to and fro and radioactive steam has burned out the lights, three technicians wade through the basement. They've volunteered to manually open water pipes that may—may—keep the plant's reactor from a complete meltdown, but they can barely see where they're going amid the superheated detritus of the nuclear core. When the killer radiation burns out the last of their flashlights, the darkness turns total and suffocating, broken only by the sound of their Geiger counters, rising from a clickety-clack to a hellish roar.

That scene from HBO's Chernobyl miniseries is more terrifying than anything I've seen in a horror movie in decades. Or maybe not, because Chernobyl really is a horror movie: not just about errant technology, but also a maleficent portrait of an ideology that denies the existence of error.

As scary as the scene in the waters under the reactor is, the signature moment in Chernobyl may be a meeting among Communist Party bosses in the hours immediately after the explosion. One of the bureaucrats expresses doubt about the official insistence that radiation from the shattered plant is contained, even though outside, firemen and medical workers are writhing in their own blood and vomit. A senior apparatchik glares him down.

"Our faith in Soviet socialism will always be rewarded," says the party elder. "Have faith, comrades." It is not a suggestion.

The explosion of the Chernobyl reactor on April 26, 1986, was the start of one of the greatest man-made calamities in the history of the planet. The explosion of the reactor spewed so much radioactive fallout that more than a thousand square miles of the former Soviet Union remains abandoned to this day.

Somewhere between 4,000 and 93,000 people, depending on whose estimate you accept, died as a result of Chernobyl. (Except in the official annals of Soviet doublespeak, where the death toll is just 31.) Some Russian leaders—among them Mikhail Gorbachev, the last Soviet president—say the casualty list should include the Soviet Union itself, which within five years had vanished from the planet.

Producer and screenwriter Craig Mazin's remarkable script doesn't go quite that far in terms of either chronology or political implication. But it's a chillingly powerful mosaic of the catastrophe, from its technical origins in pathological Soviet secrecy to the exorbitant toll it continued to exact on innocent people all over the country long after the reactor was contained.

That mosaic is assembled from the interlocking stories of about a dozen (mostly real; many doomed) characters, ranging from techs to physicists, firemen to soldiers. The backbone of the narrative is the tale of nuclear engineer Valery Legaslov (Jared Harris, The Crown) and deputy prime minister Boris Shcherbina (Stellan Skarsgard, River), an unlikely duo paired as investigators in the first hours after the explosion.

Legaslov is already skeptical about the official line that things in Chernobyl are under control; Shcherbina, like most senior party officials, believes the company line. "I prefer my opinion to yours," he sneers to Legaslov, who retorts: "I'm a nuclear physicist. Before your present position, you worked in a show factory."

Surprisingly, they wind up working well together, and Shcherbina swings around to become an effective advocate within the party for drastic action to mute the effects of the reactor.

By the time they learn that some Soviet scientists were aware of the defect that caused the Chernobyl explosion but were silenced by the government Shcherbina isn't even surprised, just worried that the increasingly unhinged Legaslov will get them jailed or shot. "That went surprisingly well," he tells Legaslov after one confrontation with party bosses. "You came off like a naive idiot. Naive idiots are not a threat."

Legaslov, Shcherbina, and another physicist, Ula Khomyuk (a composite character played by Emily Watson, Angela's Ashes) are heroic in their defiance of the Soviet government's willful blindness.

But Mazin's script finds courage in his other story threads, too: firefighters who charge on to the surface of the reactor even though their shoes are melting; a wife of a victim of radiation poisoning, committing slow-motion suicide by refusing to leave him to die alone.

There's a group of coal miners who know their mission—they've been ordered to tunnel into the reactor to help clean it up—will have a lethal conclusion but press on anyway. When they're not stripped naked to wield their shovels in the fierce underground heat, they're cracking mordant anti-communist jokes:

"What's as big as a house, burns 20 meters of fuel every hour, puts out a shitload of smoke and noise, and cuts an apple into three pieces? A Soviet machine made to cut apples into four pieces."

Mazin's script treats the Soviet state with a scalding, contemptuous rage not seen in Hollywood productions since the early days of the Cold War. After decades of systematic starvation, forced relocations and bloody purges, ordinary citizens are so cynical about their government that they assume the order to evacuate the diseased farmland around Chernobyl is just one more mindless act of repression.

Yet their fear of the West is real enough as well. More than once, in the moments after the explosion, somebody asks: "The Americans?" Chernobyl the TV show is a painful reminder that Chernobyl the cataclysm could have been inflicted thousands of times around the world, not accidentally but on purpose. And the surreal scenes of Soviet conscripts fitting themselves with lead diapers to protect their testicles from radiation as they roamed the vast quarantined area with rifles, shooting abandoned, contaminated family pets, could have happened here, too, the world ending with a bang and a whimper.